Sarawak Report has obtained further details of the investigation into the suspected protection racketeer Gopinathan Krishnan (‘Gopi’), showing that he was in regular contact with over 20 senior police officers, most particularly from within the country’s vice squads.

The IGP himself has admitted that he and close family members knew Gopi and were in regular touch. However he has denied there is cause for concern and there is believed to be pressure to close down the investigation by the Malaysian Anti-Corruption Commission.

One new name thrown up in the investigation is that of DCP Saiful Azly Kamaruddin, who is the new Commander of STAGG (Special Task Force for Anti-Vice, Gaming and Gangsterism), the elite unit of the police force combatting gambling and gangsterism nationwide.

Saiful was promoted to the position in March of this year, not least, it is understood, because he is part of a powerful circle of top police officers also linked to Gopi, who is now being investigated for running a major protection racket, which was claiming huge sums of cash from illegal gambling dens and prostitution houses. 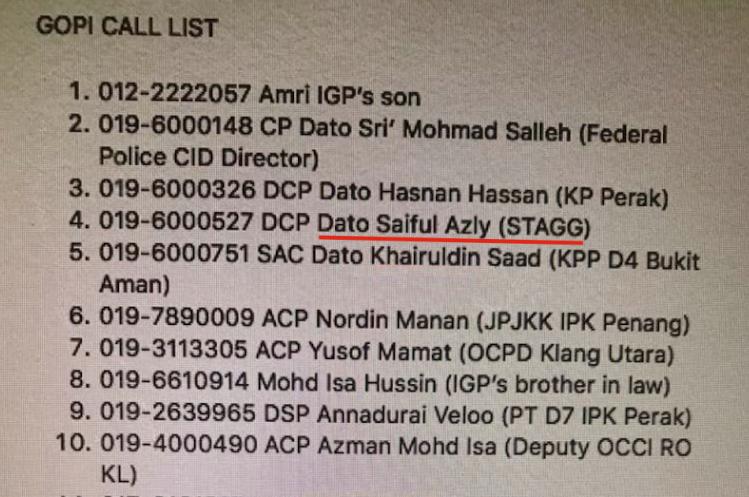 Billing records for Gopi’s phone make clear that there were copious calls from this alleged chief organiser of the protection racket to the handphone of the newly promoted STAGG boss, who in turn is known to be a close friend and colleague of the Inspector General of Police (IGP) Khalid Abu Baker.

During January and February, just before his promotion, Saiful received no less than 36 calls from Gopi, who has been identified as the civilian who was organising collections by police officers in Malacca of cash from the various illegal dens.

It has already been reported that Gopi was known by those police officers to have high level contacts in the Federal police force and that failure to cooperate with his demands to extract the cash would mean repercussions for their job situations.

Gopi is also reported to have confessed. So, what were these regular conversations about with the soon to be promoted head of the unit that is in charge of controlling the very vice activities that Gopi and his accomplices were said to be milking through their alleged protection racket?

Calls in succession on January 24th

Some of the calls were just a few seconds, others were lengthy and with follow-ups on the same day.  In March and April, after Saiful had been promoted, the phone calls from Gopi continued with 17 calls during that period, most of them just a few seconds long.

Sarawak Report has already reported that the Head of CID, Mohamed Salleh, and also the Police Chief of Perak, Hasnan Hassan, were on Gopi’s list of contacts.  Also among the top names in the list whom we have not previously identified:

Given the seriousness of the charges and the huge number of senior police officers with whom Gopi was regularly communicating, a full explanation is clearly required for each of these many phone calls.

Instead, the IGP has rebutted Sarawak Report, saying that many people have his number and ring him to answer questions:  “I don’t even know who some of these callers are“, explained Khalid to reporters, despite earlier saying that the well-connected suspect was indeed a family friend and in regular touch also with his son and brother in law.

The IGP later called on the Editor of Sarawak Report to show up in KL in order to brief his police on information relating to the global 1MDB kleptocracy scandal, yet at the same time threatened that his police force could not guarantee her safety.

Sarawak Report has other numbers also connected to top police officers, which it is presently researching.