Can You Give Us Till The End Of The Month?

According to sources with ears close to the ground in the Middle East, Malaysia’s Minister of Finance and his team at 1MDB, have approached IPIC begging the Abu Dhabi fund to give them till the end of the month to pay the US$628,000,000 fine that ought to have been paid by the end of last month.

As has been widerly noted, the Bank of Malaysia scrambled on August 1st, the day after the expiry period, to raise almost that exact sum (RM2.5bn), which in principle should be available on the 4th, just in time to meet the grace period of five days over-run built into the contract.

But, since everyone has noticed this apparently rather obvious move, MOF is allegedly asking for the extra time to attempt to disguise the link.

After all, the government and 1MDB Directors have been telling us for weeks that the debt would be paid from the fund’s own “assets” on the basis that all its cash has not been stolen after all and was just invested in missing “units”.  The Singapore Court, Swiss Attorney General and US Dept of Justice are simply wrong…. say Najib and 1MDB, except they have yet to produce the missing money. 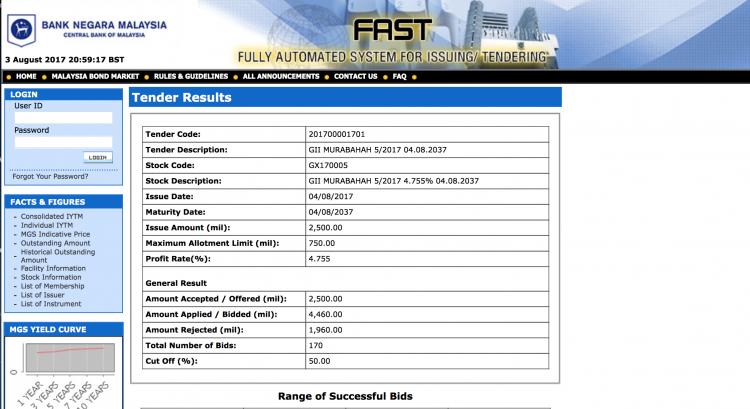 This hasty tender was spotted and challenged

If this bond is indeed what it looks like, which is a bail out by the Malaysian Government, ultimately the guarantor for 1MDB, one has to wonder why Najib did not execute the move a whole lot sooner?  He has known about the deadline for months. Needless to say, Second Finance Minister Johari has, of course, been wheeled out to deny the claim altogether.

The answer, we are reliably informed, is that the PM is hell bent on maintaining the deception that 1MDB had money after all.  Najib had been banking on some payments out of the various recent deals cut by his trusty financial advisor, Jho Low, in China (such as the East Coast Railway and Banda Malaysia investments and purchases like Proton), which could then be disguised as 1MDB repayments.

The sticking point turned out to be that the shady off-shore manoeuvres aimed at disguising the source of the money coming in (so Najib could present the cash as “redeemed assets” from 1MDB) had understandably made those Chinese government connected investors queasy, according to people who ought to know.

Jho Low and his master have way too much form on the dodgy offshore transfer front.  Just take a look at the Singapore Court cases relating to 1MDB, which have seen a number of bankers jailed and fined for getting caught up in this sort of ‘layering’ exercise, by which an organisation circulates money in order to disguise its origin.

1MDB has already also been caught ’round-tripping’ in a similar fashion, in order to give the impression that investments in the Caymans had been successfully cashed in for their accountants – Deloittes later cancelled those 2013 accounts, saying they now realise the information was unreliable. Then Deloittes resigned.

Seeing similar games getting under way, we are told the Chinese companies have pulled back on their promises to be involved.  The President has also apparently stepped back from his plans to visit KL in the coming month.

It has left Jho Low’s ploy of presenting the debt repayment to IPIC as a triumphant vindication of 1MDB’s claims they had the cash all along beached right at the last minute (when will Najib learn that his ‘financial whizz kid’ is in fact a learner driver, who long since crashed?).

The scenario explains what had at first seemed inexplicable, which was why had Najib allowed such an embarrassment to occur and failed to provide for a way of paying an anavoidable debt in a manner that could plunge Malaysia into default and destroy its currency.

The answer appears to be that he is still trying to cover up the truth with more pretence!  If IPIC won’t play ball we can expect the Bank Negara bond to be employed early next week.