The Finance Minister’s desperate scramble for money appears to be continuing as Malaysia’s London buying spree of recent years has been thrown into crash reverse.

Following FELDA’s Kensington hotel sale it has now emerged that Malaysia’s monster savings fund Permodolan Nasional Berhad (PNB) is seeking buyers for two major properties in the city which it bought in 2012*.

Those purchases were performed without doubt on the prodding of Najib and his UK business pals, in particular the Tory Trade Envoy, Lord Marland, who has said he regarded Malaysian inward investment into London as one of his signature achievements.

However, the benefits for the Malaysian public were always more questionable. After all, according to the financial press PNB was obliged to borrow a billion dollars to fund those purchases, making them a risky investment where the rental income would be largely going on funding the borrowing costs:

“..PNB has been in talks with around seven banks, including Bank of Tokyo-Mitsubishi UFJ, Mizuho Corporate Bank , OCBC Bank, Scotiabank, Standard Chartered Bank, Sumitomo Mitsui Banking Corp and UOB to arrange the facilities.
The first bridge entailed a StanChart-led facility, which will back the 350 million pound purchase of Milton & Shire House on Silk Street, the current headquarters of law firm Linklaters, Basis Point added.
The Malaysian government-linked fund planned to borrow a 250 million pound loan to take out the bridge earlier this year, but it decided to get the larger-sized new loan after it went on to buy two more London properties…[Reuters 2012]

So, what was the point?  Clearly not much, it has been decided, since five years later the fund is unbuttoning the whole expensive deal.

If 2012 was arguably a terrible time to invest in London, in the upper reaches of a price bubble inevitably about to burst, right now in 2017 the timing seems terrible for sale. As the headlines on the story make plain, PNB’s massive office blocks at One Silk Street (rented by Linklaters) and 90 High Holborn will join about £10 billion pounds worth of similar property that has also come onto the market as London reaps the negative rewards of Brexit. 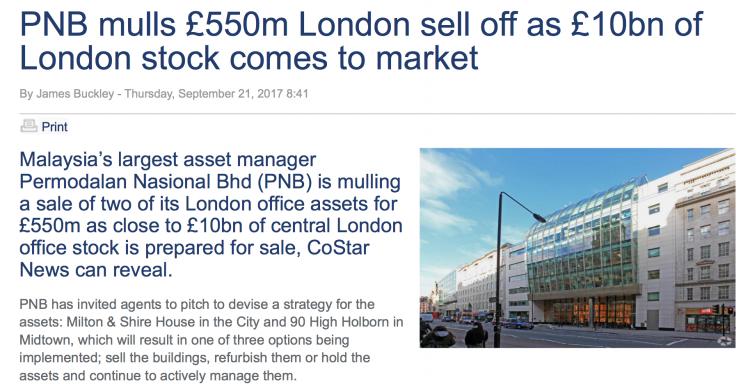 The profit or ‘yeild’ on the buildings looks set to be fairly miserable over the period, particularly given the huge costs of acquiring them and servicing the loans.  The buildings have increased in potential value by only 4-5%, which is chicken feed compared to earlier gains on the London property market:

“If the sale is sought it is thought that the 453,474 sq ft Milton & Shire House, which is let for a further nine years to Linklaters, could fetch a price of just over £360m, reflecting a yield of 5.2%. The building at 1 Silk Street produces an income of £18m per annum.

Ninety High Holborn, a 217,654 office building, is expected to be sold for £190m, reflecting a 4.75% yield, or £1,000 per sq ft. The building has five years of income but comes with some vacancy given the departure of one of its tenants, Olswang.

Its other major asset, Aviation House, is not currently being considered for sale.[CoStar UK] 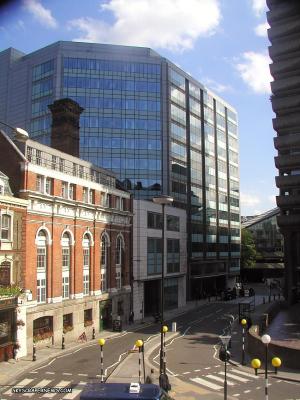 With an election looking all the less likely this year, for example, one extremely large payment is now looming from that other Najib controlled entity, which is 1MDB.

The second $600 million tranche of its fine to Abu Dhabi’s IPIC is due at the end of December and 1MDB doesn’t have the cash. So, can we expect to see PNB’s money retrieved in London ploughed into, for example, inflated purchases of 1MDB former properties such as Bandar Malaysia and Air Itam, which could then be funnelled towards those payments?

After that, there are the upcoming expenses of a ‘Money Politics’ style election campaign, of the sort that Najib is the most extravagant practitioner of. People will expect to be bought off with one-off government hand outs, goodie bags and bribes for votes and larger sums will have to go to local strongmen. This is how BN ‘wins’ elections and Najib will be only too aware that this time around the hurdles are higher and therefore even more expensive than before.

He will either have to engage in a fair fight, like real democracies or raid the kitty, meaning Malaysia’s public funds, to get the money. 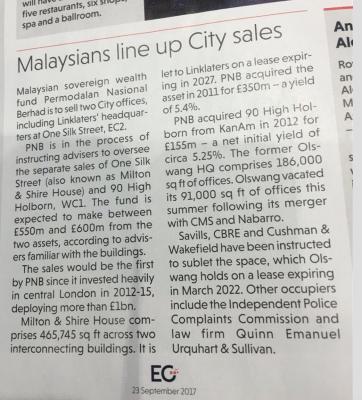 News of the expected sales is all over the property press

Voters need to understand how such election handouts are being achieved at the expense of the public funds that they and their children have been relying on to pay for their old age and to keep the Malaysian economy strong.

It is plain that Najib does not care about their future (or he would have resigned after being identified as MO1).  He cares only his present win; he wants to shake off his scandals, wipe his slate clean and go after all his critics by using the excuse that the ‘people supported him’ in the election.

None of this is in the real interests of ordinary folk or the Malaysian economy.  People need to think twice about accepting a small pay-off in return for surrendering their future security and comfort as funds like PNB are raided for such purposes.

*PNB have clarified the purchase was 2012 and not 2014 as reported in some of the property press.

Note: Ministry of Finance owned PNB has written to protest the above remarks, saying that their exploration a sale is in line with a ‘long term strategy of portfolio diversification’.
“After holding properties for more than 5 years, PNB is exploring the possibility of divesting these properties in line with our investment strategy to prudently monetise our investment as they reach maturity and reinvest the proceeds for other investments. Further, this is also to take advantage of continuing strong demand for UK properties despite concerns over Brexit ….This strategy however is subject to PNB receiving offers that are attractive and meet our expectation”.
The statement concludes “PNB has a strong and successful track record of almost 40 years. It is an institution of trust, competency, prudence, honesty, integrity and professionalism. Any inferences that proceeds from the disposal of its UK properties would be used for any other reason than for the benefit of unit holders are completely false and malicious“.