Unlike the US visit to the White House, Najib’s team managed to keep his UK leg of Operation Photo-Op strictly under wraps, in order to avoid the inevitable advance press criticism had it been known about.

The visit to Downing Street had been made, the key photos taken and Malaysia’s scandal-tainted PM whisked back to the airport with military precision all before any pesky journalists had been alerted!

All so that Najib could have the prized pics splashed all over Malaysian media, together with the single message that he has been trying to spin throughout the trip, which is that he cannot have been identified as a crook by the US Department of Justice after all, because of course these democratic leaders would never have welcomed him if that was true.

Indeed, to take the matter further, his PR writers are now claiming ‘proof’ that the whole 1MDB affair – pink diamonds, yachts, Hollywood movies, Vegas casinos, masterpieces, mansions and all the rest – is just cooked up lies, concocted by foreign spies and conspirators in league with the FBI.

Too bad that this ludicrous narrative, which ignores mounds of evidence, has coincided with the latest news to be issued from the United States Federal Court as Najib headed mid-air from the US to UK.

Judge Dale Fischer, who has been presiding over the civil case to sequestrate assets procured with money stolen from 1MDB in the California Central Court, gave his response to the US prosecutors’ application to freeze that case, to enable them to get on with their central criminal enquiries.

The judge has readily granted the application, meaning that all the seized assets will go into the deep freeze for as long as it takes for the investigators to complete their higly complex global criminal investigations into 1MDB officials and various named individuals, includnig Najib’s step-son Riza Aziz and alleged accomplice Jho Low.

The way the evidence already looks Najib himself is more likely to eventually find his name added to this list as a key orchestrator and beneficiary of the plot to steal billions from Malaysia’s public coffers and then launder the money through the United States.

Judge Fischer fully supported the request to withold any further informaiton that might enable the criminals to cover their tracks or intimidate witnesses and granted an indefinate stay of the case, meaning there is no question of the US ditching the 1MDB case any time soon:

the Court is satisfied that the continuing prosecution of these civil forfeiture cases would adversely affect the prosecution of the related criminal investigation. The Court sees no reason to doubt the government’s claim that a criminal investigation is ongoing into the underlying money laundering allegations that form the basis for all of these civil forfeiture cases. The government has stated that the revelation of discoverable facts in these cases could reveal investigative methods of the investigation, subject witnesses and informants to intimidation or retaliation, and raise the potential for evidence destruction. Given the complex nature of the alleged crimes and the sensitive political and diplomatic issues involved, it is apparent that revelation of any significant amount of information by the government could endanger the operation of the criminal investigation. For this same reason, a protective order is not sufficient to protect the interests of the government and the public. Further, the Court sees no reason to engage in piecemeal discovery with some discovery pursuant to protective order now only to be essentially repeated later after the criminal investigation has terminated. Nor would the stay violate any of the claimants’ due process rights. The reason for the delay is well-founded and codified as important by Congress. The length of the delay, while uncertain, does not have to be unduly long because the Court can reassess the need for terminating the stay if the criminal prosecution extends for an excessive period. Finally, no claimant has provided any compelling statement of any prejudice that it might suffer other than that the claims to the various properties will remain uncertain for a longer period of time – a problem inherent in any stay of a forfeiture proceeding. The motion for a stay is GRANTED. The stay will continue until vacated by the Court, but the government is to provide status updates as to the investigation every 180 days to allow the Court to assess whether to continue the stay.

So much for 1MDB being a cooked up story and so much for all the Malaysian spin that has attempted to suggest the stay on the civil case meant the FBI were dropping their enquiries. 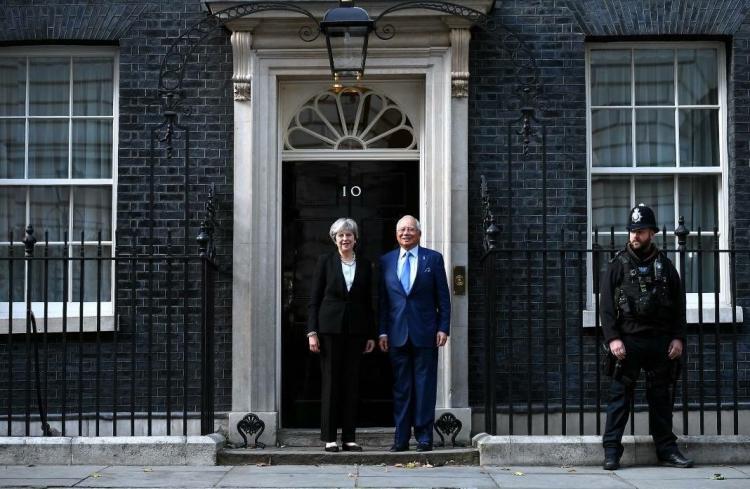 It leaves PM Theresa May as exposed at President Trump for having played along with Najib’s blatant attempt to misrepresent the facts to his own electorate through Operation Photo-Op.

Who were the high paid lobbyists for this stage of the operation?  Perhaps it was merely Najib’s tame and reliable government connected business contacts linked to the Battersea Power Staion Project, who fixed this meet and greet. Huge sums have already been ‘exported’ into that from the Employee Provident Fund.  Such interests still owe Najib big.

On the other hand, it may emerge that lobbyists have once more smoothed the way and made a packet in the process.

In which case were fighter jets again the lure to bring Mrs May to the other side of the cosy fireplace?  For years Najib has led various European nations a merry dance pretending that he is about to choose from whom to buy a fleet of brand new aircraft. In truth he can’t afford a second hand, twin propeller bi-plane at the moment, but if he has conned Trump he will be buying 58 Boeings, why not keep May on the hook over fighter aircraft too?

Ought she be chastised more for being immoral of more for being stupid will be the question for Malaysians to consider, because one thing that is becoming pretty clear is that Operation Photo-Op is pulling the wool over nobody’s eyes back home, even though that is where its targeted.