Prince Charles is known for speaking out on good causes and for having a strong moral instinct. However, on this visit to Malaysia he will have been urged by the UK Foreign & Commonwealth Office to zip his lips and give its deeply tainted Prime Minister, Najib Razak, a pre-election boost.

The purpose of the visit is ostensibly to celebrate Malaysian Independence, which is a worthy aim.  However, given the present crisis of governance and the global corruption scandal on the part of the Prime Minister, NGO’s have questioned the UK’s willingness to appear to condone and endorse a mega-thief.

The reasons for that would seem less worthy and the product of behind-the-scenes skullduggery.  A PR company owned by individuals with powerful political links to the present UK government has received a fat contract from Najib, according to documents seen by Sarawak Report.  The same individuals have strong political and trading ties with Malaysia and are pledged in this contract to assist Najib during his election campaign.

On his way back from seeing Donald Trump in September Najib also visited Theresa May in the UK on a low-key lightening visit. There was no announcement about what was discussed, but the UK has been chasing major arms sale contracts with Najib, who was Defence Minister back at the time of the Arms for Aid scandal, which embroiled the government of Margaret Thatcher.

Relations between the two countries appear to be back in the same place with many of the same players.

By contrast Prince Charles is a passionate defender of indigenous peoples and the environment. Back in 2009 he wrote a personal letter to the Editor of Sarawak Report in which he kindly praised her for her concerns about the deforestation of Sarawak and the treatment of the native people who have lost their lands:

“Dear Clare…. I do greatly admire your intrepid undertaking … You may not know, but I went to Indonesia last November.. and I spoke about the whole rainforest issue and about my own Rainforest Project, which I had initiated a year before, having been approached in desperation by several of the experts who told me we faced the dire prospects of losing the battle against catastrophic climate change unless we could at least halt deforestation…
Your letter and D.V.D. have only too clearly highlighted the urgency of the situation we face and I have asked the Director of my Prince’s Rainforests Project to contact you to ensure you are fully briefed as soon as possible on where things stand and to discuss how we could help you and you could help us!… It was marvellous of you to write as you did – don’t worry, I’m doing my best on this whole crucial business and refuse to leave any stone unturned until we have, somehow, cracked the problem…. Yours most sincerely Charles” 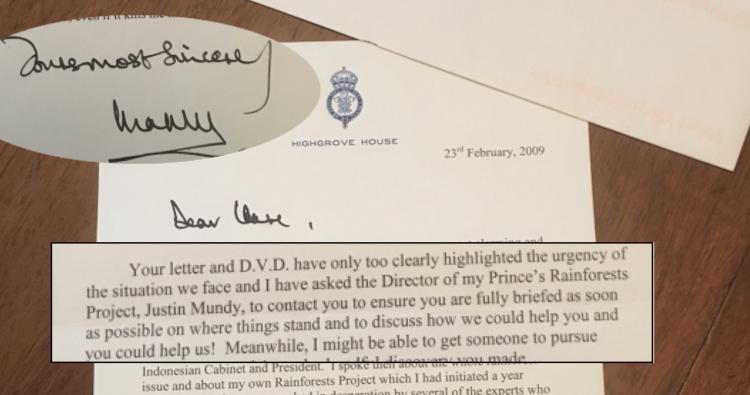 Yours most sincerely – Charles

The Prince’s letter and the meeting with his trust were heartening and inspiring and the Editor of Sarawak Report has indeed responded over the subsequent years by doing her level best to bring the corruption driving deforestation and human rights abuses in Sarawak to public attention, particularly within Malaysia itself, and especially Sarawak, where the media is heavily controlled by those who have benefitted from the plunder involved.

In 2009, after filming in Sarawak’s interior, we also delivered gifts presented by Penan tribespeople to the Palace of St James. These were products of their handcraft offered to the Queen, Prince Charles and Prince William and the gifts came with a plea, which was that the British Royal Family should lend their support to their desperate plight, as they try to protect remaining virgin forest in what was once the most bio-diverse and important natural region on the planet.

Prince Charles cares deeply about these matters and about human rights and fairness towards native peoples. He has made this clear throughout his life and they are noble and correct concerns.  Sarawak Report and other NGOs believe that the Prince ought not to be silent on these issues or on the problems of oppression and corruption in high places when he visits Malaysia, since some things are simply more important than the hope of selling arms to a country that does not need them.

Click below to read the joint statement by Suaram International and Global Bersih:

We call on His Royal Highness as a representative of Her Majesty’s government to urgently address Malaysia’s spiralling human rights abuses and ongoing crackdown on Malaysian rights activists and opposition politicians on his upcoming visit to Malaysia.

As HRH will be aware, the Malaysian Prime Minister Najib Razak is currently embroiled in the 1MDB corruption scandal the US Department of Justice (DOJ) has described as the ‘greatest kleptocracy case in history’ alongside allegations of widespread electoral fraud. Shortly after the DOJ report, The Guardian published a detailed article about their investigations, ‘1MDB: The inside story of the world’s biggest financial scandal’1.

Prime Minister Najib Razak has been silencing his critics, by sacking his deputy prime minister and the Attorney-General, quashing an internal investigation by the Malaysian Anti-Corruption Commission, and revoking the publishing licences of newspapers. Najib Razak and his government continue to use the Sedition Act, the Peaceful Assembly Act, and other draconian laws to silence human rights defenders, journalists, opposition politicians and civil society activists in his Barisan Nasional (National Front) coalition’s six decades hold on power.

“That this House is alarmed about allegations of the misappropriation of billions of dollars from the 1Malaysia Development Berhad, a state-owned investment firm intended to promote economic development in Malaysia, including by the current Malaysian Prime Minister, Najib Razak; notes related on-going investigations in a number of countries, including the US and Switzerland; further notes the statement by the FBI Deputy Director Andrew McCabe, in connection with the largest single action so far by the US Department of Justice’s Kleptocracy Asset Initiative, that the Malaysian people were defrauded on an enormous scale; highlights the continuing restrictions on freedom of expression and of association in Malaysia, as well as the misuse of the Sedition Act, targeted particularly at Government critics, including opposition politicians and MPs, such as Anwar Ibrahim, jailed following legal proceedings which fell far short of international standards, and Rafizi Ramli MP; encourages the Government of Malaysia to allow international observers, including from a range of Commonwealth countries, at its upcoming General Elections, to demonstrate its commitment to free and fair elections, particularly given Malaysia will be taking up the Chair-in-Office of the Commonwealth in 2020; and calls on the Government to ensure that allegations of misappropriated funds from Malaysia having been used to buy assets in the UK is thoroughly investigated.”

The Malaysian Government continues to curb fundamental human rights in Malaysia through:

Malaysians continue to witness a narrowing of the official definition of ‘orthodox Islam’, and an accompanying escalation of intolerance towards not only non-Sunni Muslims and other faiths, but also towards more tolerant interpretations of Sunni Islam. The state’s powerful and well-funded religious institutions are increasingly used to suppress dissent of all kinds, under religious pretexts. Most recently, this has included the persecution and deportation of visiting Turkish Muslim writer Mustafa Akyol6, and the charging of his host Dr Ahmad Farouk Musa and his organisation the Islamic Renaissance Front for ‘abetting Mustafa Akyol for giving a religious talk without proper accreditation7‘.

In 2014, Najib Razak announced that Islam and its followers are now facing new threats under the guise of “humanism, secularism, liberalism and human rights8.” He went on to state that, “we will not tolerate any demands or right to apostasy by Muslims, or deny Muslims their right to be governed by Shariah Courts and neither will we allow Muslims to engage in LGBT activities.”

In 2013, freedom of religion was one of the key issues discussed during Malaysia’s second cycle of the UN Universal Periodic Review, with several states including Austria, Canada, Italy and Poland making critical comments and recommendations.

In June 2014, Najib Razak even encouraged members of his party to “be brave like ISIS fighters.9” Extremist Islamic movements are on the rise in Malaysia, spurred on by Najib’s

use of racial and religious extremist rhetoric. The ruling United Malay National Organisation (UMNO) has forged an alliance with the conservative Pan-Malaysia Islamic Party (PAS) in order to secure more rural Malay votes. As part of the pact, amendments to the Syariah Courts (Criminal Jurisdiction) Act 1965 seeking to impose stiffer penalties for offences along the lines of Hudud law are now regularly debated in parliament and are seen as a worrying development by both moderate Muslims and non-Muslims alike.

In the past year, religious tensions have escalated with a number of kidnappings and ‘enforced disappearances’ of Christian pastors and religious minorities in Malaysia10. In September 2017, the UN Special Rapporteur for cultural rights Karima Bennoune noted that the discrepancy between reality and rhetoric on Islamic fundamentalism and religious extremism in Malaysia was extremely worrying11.

Preservation of the environment and nature are issues important to HRH. It will therefore be devastating to learn that over the last few years there have been a spate of murders of activists throughout Sarawak12. These activists were opposing illegal land grabs, illegal logging and mining activities aimed at decimating their native customary land and the Borneo rainforest ecosystem13. British investigative journalist Clare Rewcastle Brown has been instrumental in exposing issues of endemic corruption and human rights abuses in the state of Sarawak specifically and Malaysia as a whole, revealing how “in the state of Sarawak, the profits from timber, oil and now oil palm (much of it grown on land illegally sequestered from the indigenous communities) have gone straight into the pockets of political cronies, who have run the country for personal profit and plundered it indiscriminately for the past decades of continuous rule. The once unparalleled tropical rainforests have been denuded – scarcely 5 per cent remain uncut – and the tribal peoples who depended on the forests for their food are now deprived of their means of subsistence and in several cases starving.”

The UK can and must play a critical role in ensuring a UN member, a Commonwealth friend and ally like Malaysia heeds its democratic obligations and respects the rights of its citizens without resorting to widespread violence, intimidation, corruption and stolen elections.