Far from genuinely disapproving of it, it is a key part of the PM’s campaign strategy for this election, which is now being rolled out through the media and online as part of an obvious and deliberate attempt to boost his chances against all odds. 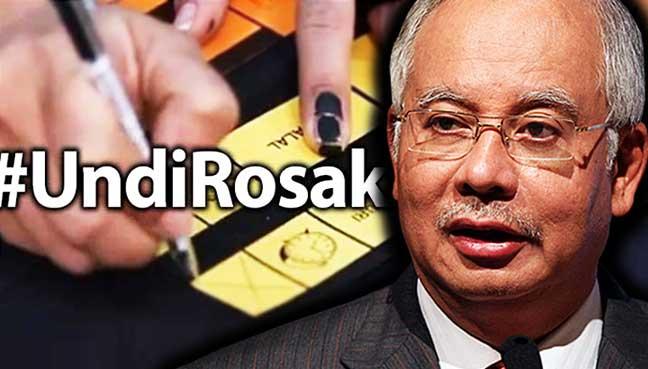 Of course, under present circumstances, where he has been exposed as one of the world’s worst kleptocrats, Najib Razak would rather not have an election at all.  Indeed, most of the countries he seems to admire do not permit democratic rights and if he could he would cancel the pesky review of his position.

It is only the existing suppression of genuine democracy that has allowed Najib to remain in post.  In a democratic country ruled by law the PM would have been removed and prosecuted in the first half of 2015, when law-enforcers attempted to bring his criminal activities to book.

Therefore, it is entirely likely that he hopes to snuff out elections altogether to protect himself.  But, first he needs to win GE 14.  So, who is advising him on how to do it and what is their advice going to be?

At his disposal and paid for, as usual, by millions of dollars of diverted public money, will be a covert army of international election agents, local experts and of course Special Branch, all armed with the latest information and advice on how to gain crucial advantages over his opponents.

Yes, of course, Najib is currently gerrymandering in every possible way, pushing to get approval for the most outrageous manipulations through the courts.  However, any decent advisor worth his salt will also have warned the PM that he needs to overwhelm a very widespread sense of revulsion, most particularly amongst that growing segment of the electorate, which is the informed younger urban voter.

This is the demographic challenge that has worried BN/UMNO increasingly as each election has gone by.  Young people are sick of seeing the same corrupted party in charge (now the longest running government in the world) and they want change and reform.  BN has dealt with it as best they can, which is why many urban seats now contain some 150,000 voters, while backwoods rural seats populated by these people’s grannies can have as few as one tenth.

But, as the numbers relentlessly build against the incumbant office-holders there is one obvious tactic that experts are without question also recommending to Najib,  which is to convince these young and reform minded voters to simply ‘make a statement’ and stay at home.   Convincing disillusioned young voters to refuse to give their support to either side was one of the great triumphs of the Trump campaign.  Young progressives were never going to vote for Trump, so the key way to disarm them was to prevent them from voting for Clinton either. 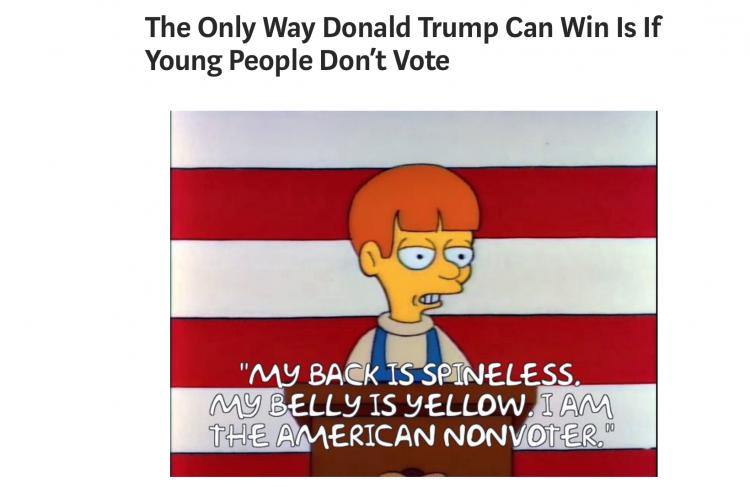 Najib hopes to pull the same trick on young Malaysians

Of course, BN are not going to advocate this advantageous strategy themselves and give the game away. They will employ ambassadors and con well-intentioned buffoons and attention seekers to do the job on their behalf.  Facebook, Twitter and social media are perfectly designed to viral such ideas as if they were spontaneous and BN’s ‘Cyber-warfare Unit’ has been created with thousands of paid up bloggers ready to perform these very tasks.

This was exactly how Trump managed to swing his victory, with  young people encouraged online to “show their disapproval” by not even bothering to cast their vote.

Talking about self-betrayal.   In a democracy failure to vote represents the ultimate act of irresponsibility – the surrender of hard-won freedoms out of laziness or stupidity. But, if electors can be misled and deceived into thinking of it as a positive gesture, well then that is exactly what Najib has been paying all those millions of diverted public money to ‘election strategists’ and ‘communications experts’ for.

Without a doubt it is these forces who have been behind the emergence over past days of such a well-coordinated and well-publicised campaign to spoil votes or stay at home.

Najib has affected disapproval, but don’t believe a word of it!  It is absolutely in his interests to deter young voters and the very fact that this is a well-coordinated campaign, suddenly appearing everywhere, tells people all they need to know about who is really behind movement and using those foolish spokespeople standing up to champion a boycott that can only help Najib.

When you have a sudden twitter army all saying the same thing, you know you have Najib’s state cyber-trooper operation behind the effort. The messaging is targetted at youth. Why vote for the old guy Mahathir, these strategists are putting it about.  He means more of the same, just like Najib.  Forget the fact that he has said he will step down the moment Anwar is freed from jail where Najib put him.  Forget the opposition agenda for reform.  Just make a lazy protest and stay away from the ballot box altogether.

Najib’s strategists know that every young voter who stays at home is almost certainly another vote that does not go to the opposition.  It worked for Donald Trump and it worked for Brexit in the UK and Najib has the same advisors working very hard to make it work for him in KL.  But, those more innocent supporters who are attracted by the proposal should realise that if BN can win this election the chances are very strong that it will be Malaysia’s last and that those who didn’t vote won’t get another opportunity to repeat their ‘protest’ ever.

So, expect pop stars, expect Facebook opinion formers, expect videos and people on TV to start saying over and over that their ‘ultimate protest’ will be to stay at home and ‘withhold their vote’.  Expect to be bombarded by online messages and whatsapp encouraging you to ‘join the army of non-voters’ who are demanding ‘real change’.

But, don’t be fooled about what this is all about.  If Najib can get away with this he may indeed tilt the balance of the election away from reform and change and right back towards another five years of corrupted single party rule.

If Malaysia wants change it needs a mass turnout and anyone who is saying otherwise is either silly or supect… or a sad sucker.  Don’t be!