As an outraged yellow crowd of protestors rallied outside the Parliament today, the rest of the world was waking up to Najib’s shameless display of unabashed and blatant vote-rigging.

One veteran Malaysia-watcher in the UK Parliament, Ann Clwyd MP (who exploded the Arms for Aid scandal involving Najib when Minister of Defence), immediately submitted the following three questions, tabled this afternoon:

The additional, shocking attempt to exploit the ‘Fake News’ agenda of President Trump to clamp down on criticism over his own notorious corruption has also not escaped the growing international attention gathering around Najib’s imminent re-election bid.

But, this Prime Minister is focused now on his domestic battle and he thinks once these measures have been secured he will have the election licked.

After all, bulldozing through an outrageous re-delineation worked well for BN in Sarawak in 2016, along with a good dose of bullying and bribing of vulnerable voters in isolated communities.  So, he reckons he can put the same tactic to work with similar effect nationwide. 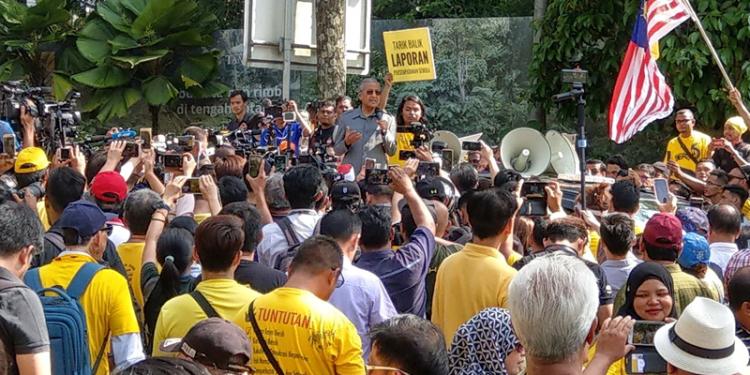 But, opponents believe he has utterly misread the situation.  Maybe, they say, he has forgotten that Adenan Satem had the distinction of being a popular and still relatively untested local leader?  On the other hand, there is no one in Malaysia who hasn’t now got the measure of the thieving ‘Cover-up Couple’ of Putrajaya!

Today it was realised that the forced through changes have even re-instated the worst proposed abuses that the Electoral Commission had earlier dropped, in the face of protests that they had not been able to seriously contest.

No wonder the Prime Minister had arranged to keep the entire bill secretly under wraps until the very morning that he released it for ‘Parliamentary scrutiny’ followed by an afternoon hearing with a vote before tea-time.

Based on voting patterns for the last election, analysts reckon that the jiggery-pokery could secure a raft of no less than 7 extra seats for BN in Selangor alone.  Everyone knows how the party and their boss crave control of Selangor with its carefully tended budget surplusses of tens of billions of ringgit.

If Najib can get his hands on the keys to Selangor’s coffers he knows that he could solve no end of holes in the public finances that he and his gang of thieves have left gaping over the past few years.  It is the ultimate prize and he is thirsting for it and now, with this ‘redelineation’ he thinks he has it. 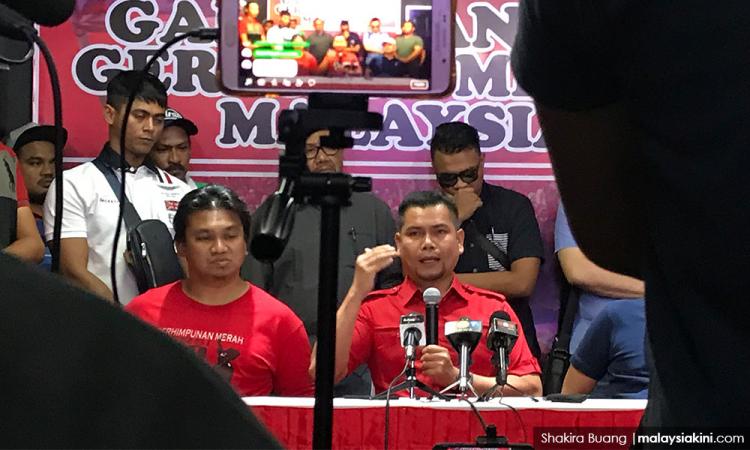 Najib’s good friend and close supporter, Jamal Yunus of the Red Shirt brigade, added his special brand of thuggishness to the mix meanwhile, by regretting at a press conference that the police had prevented him from beating up the peaceful rally and from kicking in the veteran politician Lim Kit Siang, who had protested the bill inside the building.

Yet, putting a bit of stick about is clearly what the Prime Minister likes to see, since he has never reprimanded or cautioned Yunus over his violent threats. To the contrary, he recently lent his presence to a ‘kindly initiative’ launched by the Red Shirt leader to hand out food to poor people during the period running up to this election.  Even the poor have votes after all.

It would therefore be appropriate if this ‘Malay Supremacist NGO’ leader would display the finances that have enabled him to extend his kind largesse. If it came out of his own earnings, then let us see it. 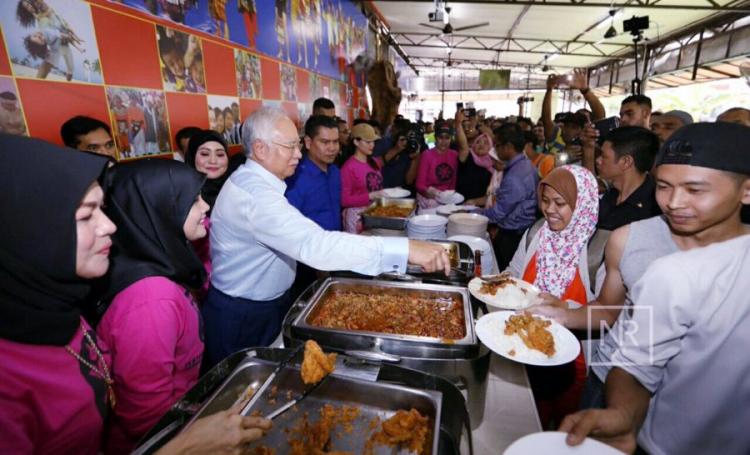 Have some of my kind friend Jamal’s Red Shirt makan.  Mind you he keeps sticks and thugs as well for those who don’t cooperate!

However, at a risk of tipping Najib Razak off over the failings of his well laid plans, there is a well-know caution for all campaigners, which is to be wary of fighting the last campaign, rather than the present challenge.

Najib has now organised matters so that if all Malaysians were to vote the same way as they did in 2013 then he could now expect a handsome win.  He has long since lured PAS away from the opposition to create three cornered fights, after all, and now he has forensically shunted around voters so that opposition folk are all stuffed into a few seats and BN voters moved into places they can tip the balance.

He can also play around with military and other postal votes as he pleases – and let’s not even start on the crazy abuses spotted across the electoral register (eg 70 people in one family house), which invariably seem to benefit BN.

Yet, the flaw in all of the above is Najib’s assumption is that all the people who voted for him last time (when he too was relatively new and preaching reform and the economy had yet to be pillaged into its present state) will vote for him again. 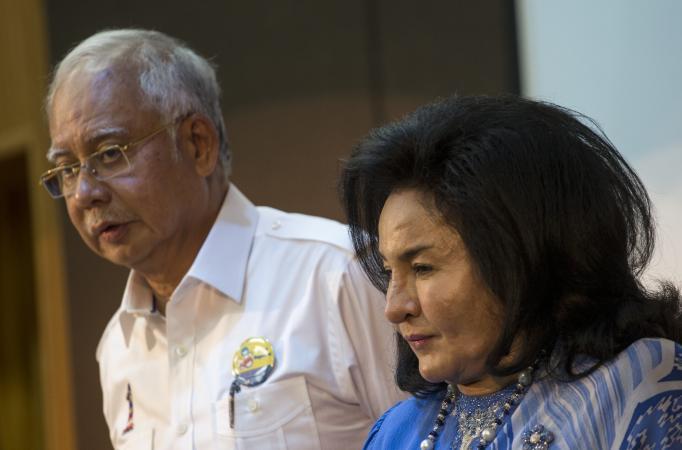 In 2013 people only suspected that Rosmah was a profligate woman, now they know that she and her husband have been stealing their public money by the billions of dollars and that they are willing to pull every trick in the book to try and keep doing it. Are the same former BN voters really prepared to retain such a treacherous couple in power, merely in return for a bag or two of rice?

Let them think so!

Even in a democracy ordinary people don’t often have the chance to put a stop to abuses by the powerful, but voters know that elections are there specifically to deal with problems like the Kleptocratic Couple and their clique of cronies, now known to the world as the authors of the world’s biggest recorded plunder of public money, 1MDB (just the tip of the iceberg).

People who voted BN last time may go ahead and vote them back.  On the other hand, they now have the alternative to vote for the former BN Deputy Prime Minister, together with former BN Prime Minister of 20 years, who are pledged to lead the country back into a safe place together with opposition reformers who have joined hands to save the nation.

They will take their pick. It doesn’t appear to be a tough choice.

Of course, Najib dismisses any idea that the solid Malay vote would desert his party.  Even so, he will have left nothing to chance and will have splashed millions, as always, on the very latest tip-top international election consultants that taxpayers’ money can buy.

And who better to dial in than the company which claims to have orchestrated Donald Trump’s stunning election win, in the face of all the odds, and the UK Brexit also?

SCL/Cambridge Analytica already have a special office in KL and have taken the plaudits from the successful Sarawak Campaign and Kedah, where they were contracted to employ their ‘laboratory scientific’ and ‘military grade’ techniques in order to influence unwitting voters, who didn’t even know they operating to help BN.

Since 2015 the firm has further notoriously developed its so called ‘big data’ techniques, thanks to stealing millions and millions of people’s Facebook information.  This is what they have boasted as using to target covert political advertising, presenting millions of ‘dark ads’ designed to appeal to different people, depending on their detected existing opinions – thanks to Facebook.

It is currently a major scandal in Britain and America where voters are realising how they may have been duped into voting for SCL’s clients, namely Trump and Brexit.  SCL has an office in KL and, as Sarawak Report has revealed, a shareholder is one of Prime Minister Najib’s key political allies in the UK, Lord Marland.

Malaysians should therefore probably brace themselves for just such advertisements via new media over the coming election period.

Likewise, young Malaysians should by now be in a position to see through the ‘Undi Rosak’ campaign that was suddenly launched via new media and flashed through all the newspapers at the start of the year.

Spontaneous campaigns by students, do not just pop up ready packaged, with special forums and road shows all mapped out to encourage as much of the youth vote as possible to stay at home.  Innocent, idealists are being manipulated if they think so.

After all, the youth vote was always BN’s biggest challenge and disillusionment was always the easiest way to handle it.  The big lesson learned from Trump’s campaign, it is widely agreed, is that it was the lack of turn out by the Bernie Sanders student brigade that lost the Democrats their victory.

Match that with BN’s existing knowledge that their weakest area is with young voters and the advice from Cambridge Analytica’s suave team of ex-Etonian advisors was always going to be obvious.

Create a new media campaign that tells young voters not to vote and base it on disillusionment over the ‘old leaders’ of Harapan. Bingo, you have neutralised the youth vote.  Indeed, if SCL/Cambridge Analytica are not encouraging and assisting Undi Rosak they have been slouching on the job, because as BN’s advisors they ought to have been!

Speaking to a UK Parliamentary Select Committee hearing into the Facebook/Cambridge Anaylitca/SCL scandal yesterday, whistleblower Chris Wylie made the following observations about the company:

He said that SCL would help politicians win elections in African countries so it could use its influence to broker commercial deals and line their pockets.
Describing how SCL operates, Mr Wylie said: ‘You can be a colonial master in these countries…it was very much like a privatized colonial operation’
He also revealed more details about the characters behind Cambridge Analytica and SCL Group…
He said: ‘You have to remember that a lot of these people are very wealthy already….
“Going into the developing world and running a country is something that appeals to them.”  [Daily Mail]

Sarawak Report suggests that Malaysians will in fact be making up their own minds at this election, whatever Najib’s covert foreign advisors presume to tell him.  Indeed, Malaysians may lead the world and show how to go about throwing out a shameless and embarassing leader!