Sarawak Report has been passed secret documents, including a 209 page due diligence report prepared by the global accountancy group KPMG, which warned Felda Global Ventures (FGV) of numerous risks involved in the purchase of a 37% share in the Indonesian palm oil plantation company Eagle High, controlled by an associate of Prime Minister Najib Razak, Peter Sondakh.

The report, dated 31st July 2015 and named ‘Project Sunshine’, details several concerns about the then proposed US$680 million investment, warning that not only was the deal grossly over-priced (70% higher than the shares were worth) at the expense of FELDA shareholders, but that there were enormous liabilities that could eventually costs those shareholders dear if they took on the responsibility of ownership.

A three page digest of that document, summarising the “Analysts’ main concerns regarding the transaction” was then drawn up to brief Najib as the Minister of Finance in November 2015.  FGV had sought to answer each concern as if it could be overcome. 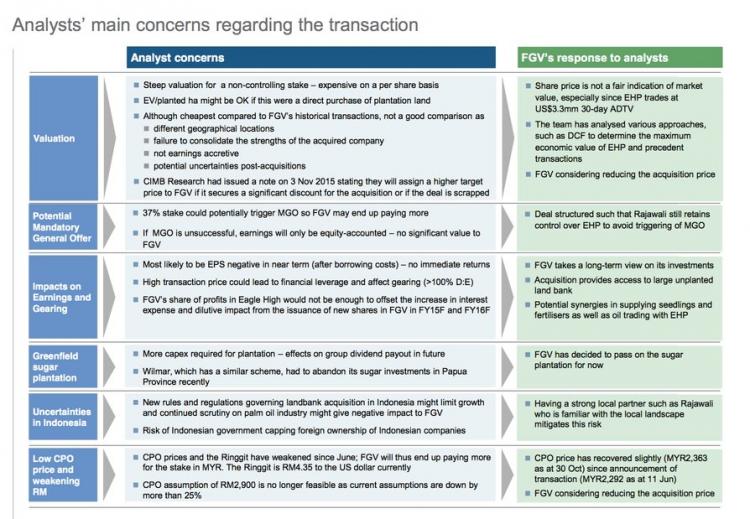 Digest of KPMG’s concerns that was passed to Najib, together with rebuttals from FGV, which nevertheless eventually pulled out of the deal – only to be replaced by FELDA itself.

The documents detailed the danger points, including unpaid tax and potential massive liabilities over further tax avoidance by the company; the outrageous over-valuation on the deal (in comparison with the share price for the plantation) and also evidence that the company had hugely exaggerated the area of remaining land it had permission left to plant.

Eagle High, explained KGMG analysts, would be unlikely to complete the process for getting planting permission for 260 thousand hectares, comprising 60% of its total landbank, where it only had temporary licences to apply to plant.

This was particularly so, because the palm oil business has rightly come under increased international and consumer pressure to halt further forest clearances.  Indeed, a related problem in taking over such a large percentage of the Eagle High plantation business was that it could lose FELDA itself a large proportion of its international customers, given that Eagle High is not RSPO (Round Table on Sustainable Palm Oil) certified and has been cited over numerous compliance violations.

In short, the warning given by KPMG was that the purchase of this over-priced concern could contaminate the whole of the Malaysian farming cooperative’s wider business.  KPMG listed the risks involved:

Nevertheless, when FGV subsequently pulled out of the deal on 23rd December 2016 FELDA itself moved in to take over the bid the very next day, thanks to a Malaysian Government borrowing guarantee, provided by Najib in his capacity as Minister of Finance.

Neither was Najib deterred by the fact that the FELDA entity used to invest in the plantation was none other than Felda Investment Corporation (FIC), which was specifically set up to invest in businesses that diversified from palm oil, making for a direct conflict with the core objectives of the fund.

An insider on the deal has told Sarawak Report “The reason [for the switch] was that FGV is under Stock Exchange scrutiny but there is no scrutiny of FELDA under MOF”.

The final price on the deal was a reduced for US$505.4mil (RM2.26bil), yet that half billion dollars still represented a huge premium – 50% over what the stock market price indicated the 37% (non-controlling) share of the company was worth.

That represented a huge pay day for Najib’s close business partner, Peter Sondakh (until then believed to be on the brink of a financial collapse) apparently at the expense of Malaysia’s small-time FELDA farmers.

Welcome To Our Dreadful Debts!

The KPMG due diligence report had also pointed out amongst its major concerns and warnings that Sondakh had been borrowing from Eagle High into his other related concerns to the tune of US$40 million and that the borrowing had not been paid back.

Having looked at the documents Najib could hardly have failed to have been aware of that burden he was placing on the farmers he had just forced to invest in the toxic Indonesian investment.

Moreover, Eagle High itself is in hock to a troubling extent to a number of banking lenders to the tune of a horrifying US$634 million – more than a hundred million dollars over what FELDA just paid for its non-controlling share of the action.  In 2015 KPMG had noted that over half of that was due for repayment within two years, at a time when the revenues of the group had started ‘flat lining’ in an alarming fashion:

Critics in the oil palm world have long pointed out another problem with Eagle High, which is that Peter Sondakh has a questionable record with the tax authorities.  KPMG had highlighted the potential for this to result in severe fines, were the company to be ruled against in any eventual prosecutions.

In fact, the auditors noted, Eagle High had been failing to pay its tax bills in the period preceding its investigation, a red flag surely on the financial state of such a major company: 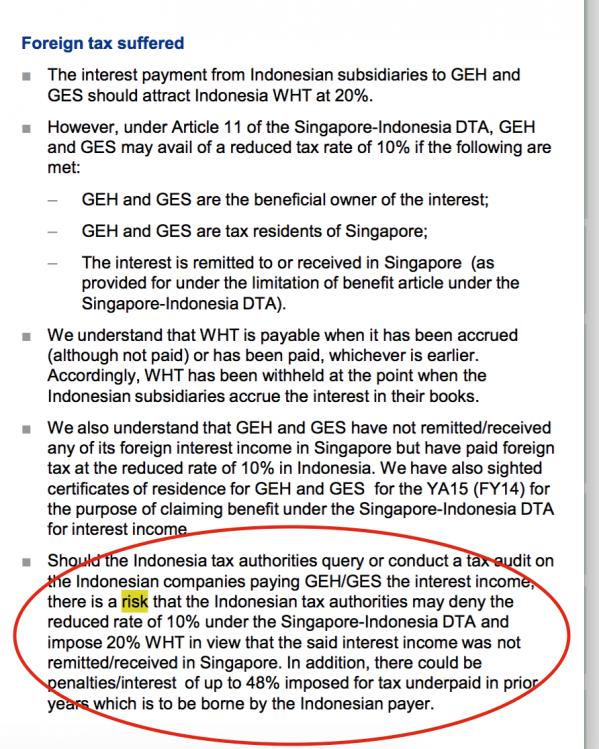 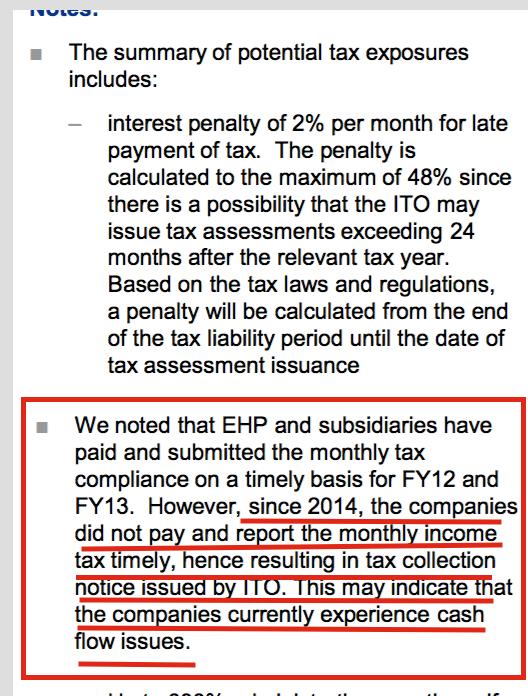 FELDA farmers, already aware of the catastrophic loses suffered by their once wealthy cooperative venture (set up to secure their futures by the former PM and present opposition leader Dr Mahathir) can only be left wondering why on earth Najib has proved so doggedly determined to buy this dodgy and hugely over-priced venture, owned by his own associate?

Sarawak Report, so far, is unable to produce the answer.