What a strange election.  The face that has been cut out from the billboards has been the one seen up and down the country rallying huge crowds, viewed on Whatsapp and Facebook across the nation.

Whereas the face that smirks down from posters everywhere, surrounded by fluttering flags and expensive bunting, has seemed virtually absent in real life.

Najib has done the odd speech, comprised of his usual tactics of bribery.  The same old message to listeners has been that he will come back to their towns and lavish them with gifts, but only if they vote BN back. Apologies for the neglect of the past 60 years and all that.

His wife has emerged once to complain at slurs that she holds influence over government, despite the scenes of her sitting at cabinet and ministers slobbering over her proferred hand (weighed down by diamonds bought with stolen cash).  Latest rumours are that she has already flown out on a loaded airplane to some safe haven – unlikely for the moment.

Most BN politicians themselves have barely bothered to campaign outside of their own areas.  Even there, the awful embarrassment of so many empty ceramahs, has seen a marked retreat from the usual activities associated with the election pantomime.  These heavyweights have preferred to do their canvassing from their air-conditioned limos, say journalists on the election trail.  One told SR:

“Some are reeeeeally out of touch with the constituents.  They come in big flashy cars and shake hands with folks at dusty roadside stalls. It’s so awkward.”

There is a sense that the BN limo is stalling to a halt. Last night’s humiliating no-show audience at the Kuala Langat concert for BN’s star youth candidate Shahril Hamdan must have horrified his party.  Dozens of free prize draws, including a motorbike had been advertised on the hoardings, yet the population stayed home.

They were glued instead, it would seem, to the unfolding drama of Harapan’s ‘Tsunami Rally’ held in Gombak, Selangor, but to be viewed on Facebook and Whatsapp across the nation.

Spinning Out Of Control

Spin hasn’t worked. The papers and BN controlled TV have been claiming the crowds attending Harapan rallies are photo-shopped.  But, then Najib, like a version of Donald Trump, undermined the narrative by claiming instead that the crowds had all be bussed in and paid (that’s what BN does after all).  Which was it?  Can’t be both.

At which point prospective ‘coalition partner’ PAS piped to ‘help’, with their Deputy Leader demanding to know how Harapan has been able to afford such amazing crowds?  He insisted Harapan immediately declare the sources of such income….. whilst PAS continues to fail to enquire of Najib, which ‘Saudi royal donor’ has been stomping up BN’s alleged billions or to admit the identity of the donors of millions of ringgit of cash paid in to their own party.

None of this feels normal, say veterans of previous elections in Malaysia.  The swing against BN is palpable and the harder Najib has tried to crack down and skew things further in their favour, the more it has backfired on the party’s plunging popularity.

Perhaps the nadir came when police attempted to charge Mahathir for ‘Fake News’, after he complained about the slashed tyres on his plane?  He challenged them to arrest him and of course they didn’t. 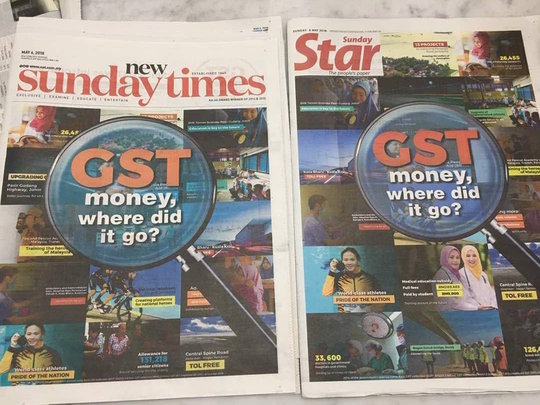 The more money Najib throws at this election, in fact, the more everyone can see what he is up to.

The finance establishment has lined up to support him and to deny change, of course.  The narrative of the paid ‘analysts’ is that a BN loss is out of the question, but were it to happen it would be financially disadvantageous for the country.

Really?  Everyone knows that it is the corrupted Najib who has been financially disastrous for the country.  But, what certain financial institutions do now fear are further potential revelations of complicity on their part – and not just over 1MDB.

Yearning For The Truth

What ordinary Malaysians are intrigued to find out is the truth of what has been going on, after years of changing tales and cover-ups. It may not make pleasant listening, but better to find out sooner rather than later.

That means, as they well realise, that they need to vote for the opposition, who will open up the lid on the can of worms.  Do the experts seriously think that Malaysians are so lacking in curiosity they don’t want to find out what has been going on this past decade of smoke and mirrors, lies and cover-ups and so will vote BN?

Another dreadful attempt at spin has been the Arul Kanda roadshow.  More active than any BN politician, 1MDB’s prime bogey-man has been sent countrywide to attempt to persuade a cheesed-off electorate that no money was ever stolen from the fund.  Not one individual in Malaysia believes the oily salesman. It was another bad move by the beleaguered inner circle in BN’s bunker. They just can’t get it right.

BN have ended by batonning down the hatches and done their best to silence the short campaign.

Huge sums have been at their disposal, but it seems they don’t even know how to buy and election anymore.  The population have been grabbing the notes that party workers have handed out, then uploaded the joke attempt to buy their loyalty onto Whatsapp video for all to see.

Now all they have left are the ‘last day tricks’ to turn to.  There will be plans to purchase ‘frogs’, manipulate postal votes, buy ballot papers on the day; the conviction in BN’s bunker has to be that stolen billions can still fix this problem.

But, nothing’s going to the normal plan.  As the early voters from the armed forces and police were about to cast their votes key leaders made an unprecedented announcement that the men could vote according to their conscience rather than according to orders (i.e. no obligation to vote BN).

Over the past hours intelligence sources have hinted, according to the rumours, that those law enforcers have opted overwhelmingly for the opposition (they don’t like corruption either).  If so, bang goes that tactic for massaging numbers in marginal seats by distributing advance military and police votes.

And what a warning for what is coming next!

All across Malaysia BN’s appearance of growing paralysis has cast an eerie lull over these short days of campaigning.  All in stark contrast to the energetic voice of a persistent, mesmerising old man, who has returned to berate his successor over the ruin of his legacy.

Perhaps Najib can still pull it off.  Like the experts say, he has all the money and all the tricks at his disposal.  However, right now in Malaysia there is the sense of a beach, where the tide is drawing out against a distant roar.