Malaysians are grateful that the newly positioned IGP identified which way the wind was blowing on election night and, together with armed forces chiefs, made it clear to the Agong that the people must not be frustrated in the appointment of the government of their choice.

For several tense hours on the night of May 9th, the ‘independent’ Election Commission had suspended the formal announcement of results, in deference to their loyalty to Najib, whilst the ex-prime minister looked for ‘solutions’ to his landslide defeat, involving anything but the return of Mahathir to power.

Those included no less than two calls by Najib to Anwar in his prison cell, seeking to carve  some sort of deal with the man he’d jailed, whilst the former ‘FLOM’ reportedly howled with tears. The panic being played out during those dark hours also involved intense discussions with palace advisors to suggest the appointment of one of the other opposition figures as prime minister – anyone who Najib thought could be more easily put under pressure than Dr M.

It was, according to well informed political insiders, decisive advice from police head, Mohamad Fuzi Harun, that broke the impasse.  The entire country knew about the opposition victory via the internet, passions were rising over the obvious disruptive tactics and the police chief did not want violence to break out on his watch.

In the early hours, therefore, the election results started to flow once more and the Agong announced that he would invite Mahthir to the palace.  Angry popular scenes were thereby averted.

It was a good move by the IGP.  Nevertheless, this top cop was appointed by a tainted government, recommended by a tainted predecessor and heads an establishment dominated for years by a culture of loyalty to a man, who believed the law was for ‘little people’ not the leaders of the country.

Who in Malaysia can forget that as late as March this year this IGP was stating that 1MDB was not a criminal matter and that there was no evidence against Jho Low?  It has to be asked how equipped is such a crime chief to assist the government in its present top tast of exposing 1MDB and retrieving all the missing cash – more importantly, how far can he be trusted?

Who Can Clean Out The Cops?

Sarawak Report reported on a number of occasions on the apparent short-comings of Fuzi’s predecessor, including inappropriate connecti0ns with a notorious organiser of a police protection racket and businesses involving the sale of firearms, which he himself must licence.

Despite the failure of the previous IGP to deny these matters, Prime Minister Najib had attempted to extend his tenure beyond GE14 and his normal retirement.  Loyalty to Najib was all that mattered. It was IGP Khalid Baker, who had tipped off the premier in 2015 that he was facing charges drawn up by the AG over his thefts from 1MDB/SRC.

In the end it was Khalid himself who bowed to pressure and stepped down, paving the succession of the head of Special Branch, Fuzi, to replace him shortly before GE14.

They are not known to be stupid in SB, hence the right call on election night.  However, the new corruption-busting administration must now decide if Fuzi and his top associates, all close to Najib, are the best men to carry out the much needed clear-up of a police force that has been allowed to descend from being custodians of the law into a dangerous threat all on their watch?

Fuzi currently tolerates one Noor Rashid as his Deputy IGP, for example, another crony extended beyond his retirement by Najib just weeks before the election.  Insiders have just passed to Sarawak Report damning evidence of an episode that has stained Noor’s reputation amongst his men, but which the police establishment seems to have chosen to ignore.

In 2015 it appears that Noor’s car was stopped in Cheras, whilst being driven by his son and was allegedly found to contain illegal substances.  The upshot? Far from the alleged perpetrator being duly charged, it was the police officers involved who received punishment for stopping the ‘wrong’ car and reporting the situation to their colleagues.

These officers were all later transferred out of their jobs, having received a warning letter that appeared to claim that they had no authority to stop or check the DIGP’s car – even though it was privately registered, so they were not aware of who the owner was (not that the DIGP or his family should be above the law in the first place): 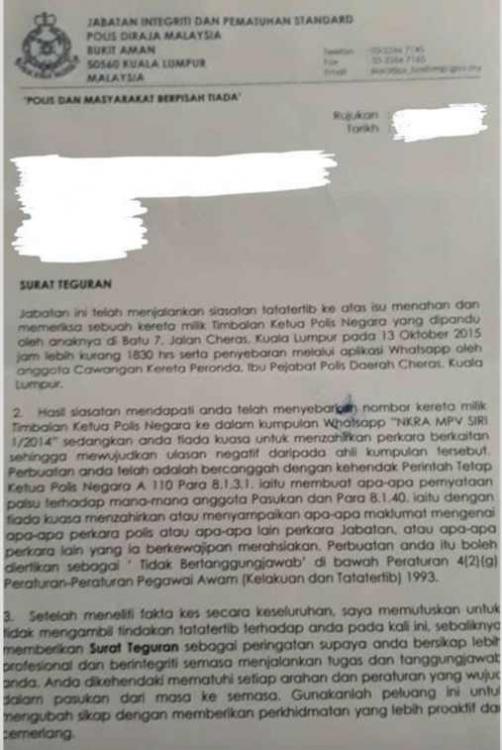 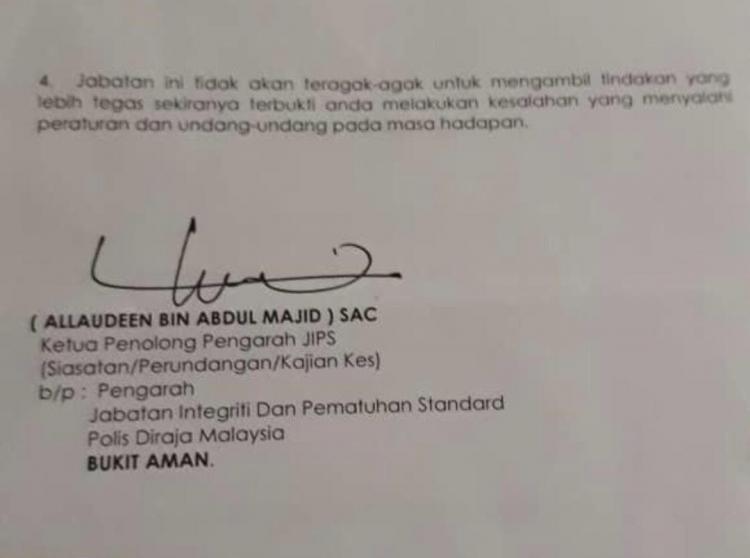 This dept has conducted disciplinary investigation on the issue of detaining and inspecting a car owned by the deputy inspector-general that was driven by his son at 7 mile Jalan Cheras, Kuala Lumpur on 13 october 2015 around 1830 hours and the dissemination via whatsapp application by members of the patrol car branch of the Cheras district police hq, Kuala lumpur.

2. The result of the investigation found that you had broadcasted the number of the car owned by the deputy inspector-general to the whatsapp group “NKRA MPW Series 1/2014” when you have no authority to verify the matter, which led to negative comments from members of the WA group. Your conduct contravenes the Standing Order of the Inspector-General of Police A 110 paragraph 8.1.3.1 which is making false statement towards any members of the force and paragraph 8.1.40 on authority to verify or disseminate any information related to the police force or other matters related to the force or any other matters that should be kept secret. Your conduct can be understood as ‘irresponsible’ under Rules 4(2)(g) Public Servant Rules (Conduct and discipline) 1993.

3. After examining the overall facts of the case, I decided not to take disciplinary actions towards you this time, but instead, issue this ‘ reprimand letter’ as a reminder to be more professional and having integrity while executing your duties and responsibilities. You are required to obey every instructions and rules of the force from time to time. Please use this opportunity to change your attitude by giving proactive and excellent service.

4. This department will not hesitate to take stern actions if its proven that you commit offence of the rules and laws in future.

There are those in the police force who feel that the episode imparts an impression that senior officers and their relatives are immune and the public is likely to be likewise concerned at this apparent attitude by top brass.

There are further concerns in that the officer understood to be in prime position to eventually replace this Deputy IGP is none other than the former CID chief Mohammed Salleh, who was revealed as one of the top cops in regular telephone contact with the leader of the so-called ‘Ops Gopi’ protection racket by exposes in this website last year.

He was transferred to nacotics in the aftermath of Sarawak Report’s revelations that (like the then IGP himself) Salleh had received several calls from the suspected ringleader of a gambling and massage parlour extortion syndicate, Gopinathan Krishnan, and had rung him back just hours before ‘Gopi’ was arrested and allegedly confessed his role to MACC investigators.

Large sums of money were also seized in this notorious case.  However, in the end it appears no charges were pressed against the crooks, who had been so apparently caught ‘red handed’.  The case appears to have simply melted away, not least owing to pressure from then prime minister Najib, our sources have told us.

Gopi has been released, probes into senior police personnel have been dropped and no charges have been pressed. Now, Mohammed Salleh is being widely touted to be Fuzi’s favourit as the next DIGP, which would involve him leap-frogging over more senior and respected officers.

Under the new order Malaysians will be expecting an untainted police force, starting at the top.  Sarawak Report suggests that the clear out needs to start immediately to prevent growing obstruction of anti-corruption measures in Malaysia and the danger of continuing high level collusion with members of the past regime, who may be seeking to distabilise the new government.

After all, if junior police officers can be moved out for stopping a Deputy IGP’s car and removing substances, then senior officers with dubious connections to gangster activity ought likewise to be moved aside and certainly not promoted.