It had earlier been revealed that the PR company, which closed after engaging in a campaign in South Africa to stir up racial hatred on behalf of the notorious Gupta brothers, was also hired to defame and undermine targets of Taib.

A sting by the UK based Bureau of Investigative Journalism in 2011 revealed that the company had been engaged to secretly alter Wikipedia sites and search tools to undermine Sarawak Report and its Editor and family and offered to do the same for a bogus client from Uzbekistan:

“The [Bell Pottinger] executives also discussed what they called the “dark arts” of optimizing Google searches and editing Wikipedia pages in favor of clients. Collins said that Bell Pottinger’s goal would be “to get to the point where, even if they type in ‘Uzbek child labor’ or ‘Uzbek human-rights violation,’ some of the first results that come up are sites talking about what you guys are doing to address and improvethat, not just the critical voices saying how terrible this all is.” [New Yorker Magazine]

However, the New Yorker has now received exclusive inside information showing that the campaign against Sarawak Report went far further.

On behalf of its client, Taib Mahmud, the Bell Pottinger team set up a number of online campaigns, including a website called Sarawak Bersatu, which purported to represent an anonymous group of young Sarawakians, who were concerned that foreign activists with ‘hiden agendas’ would ruin the economy of the state and destroy their future prosperity.

Sarawak Bersatu was not what it seemed

In fact, the entire website (now taken down) was operated and written by hired Bell Pottinger staff working out of Holborn in London.  One of them confessed to the New Yorker journalists that it was the most despicable campaign he had ever been involved in for the company.

Not only did the anonymous bloggers attack SR and RFS under false pretences, but they lodged a barrage of gross and unsubstantiated libel against DJ ‘Papa Orang Utan’, protected by their deceitful anonymity.  Had the identity of the firm been revealed he could have sued the firm for substantial damages: 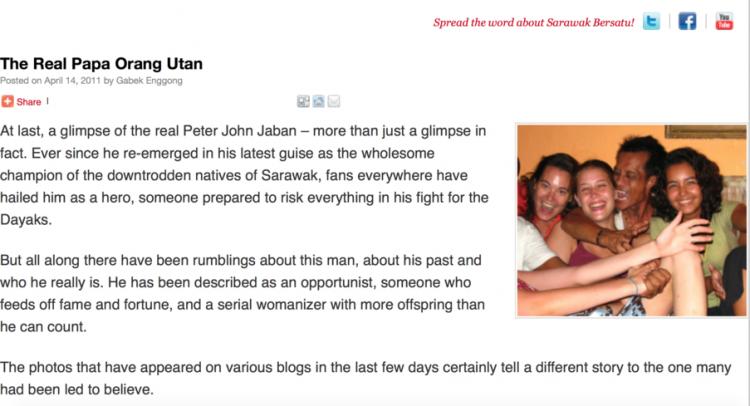 Such attacks, were apparently made at the request of the then Chief Minister and present Governor Taib Mahmud, who sought to destroy the reputation of his critics, not by open rebuttals but through a series of secretive and expensive PR campaigns.

By request? Rosmah given the prominent place in BN

Another PR company hired during the same period, also for millions of dollars to attack SR, was the TV production outfit FBC Media, exposed for taking huge sums of money from some of the world’s most repressive regimes, in order to illegally promote dictatorial autocrats in a flattering light on their TV news shows.

Crowing after the election Bell Pottinger made clear that Taib had feared the influence of the Radio Station would lose him votes.  This was the reason behind the covert campaign, funded by public money stolen from the very people Taib was seeking to influence. 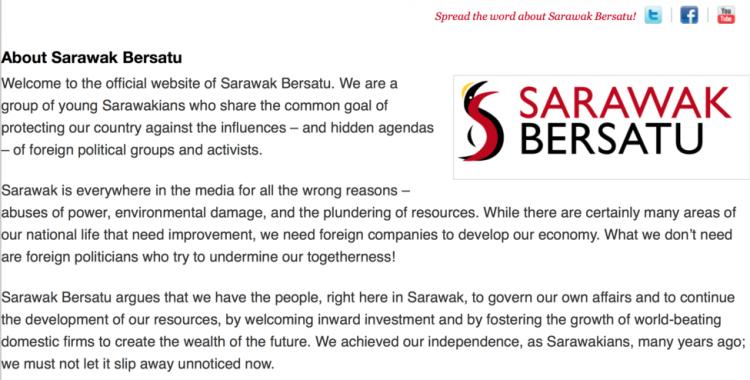 Fake News and Dirty online PR campaigns were pioneered by Taib against SR and RFS for millions of dollars.

The full New Yorker article can be found on their website.  The section about Sarawak is below:

In 2011, during the Arab Spring, Bahrain erupted in protests against the royal family. At the time, Bell Pottinger was advising the Bahrain Economic Development Board, and on occasion its brief extended to advising the Bahraini government more generally. The government responded to the protests with a repressive backlash. Bell Pottinger’s digital team prepared for its Bahraini clients a list of the most influential dissidents on social media. An employee involved in this work does not know the fate of the individuals on the list, but he remains troubled by the fact that Bell Pottinger performed this service at a time when Bahraini officials were imprisoning and torturing people who spoke out against the regime. The Bahrain account brought in three and a half million dollars annually.

In the same period, the firm also worked for Abdul Taib Mahmud, the chief minister of Sarawak, a state in eastern Malaysia. He had held the post since 1981, and was seeking his eighth term. Opposition figures frequently called Taib corrupt. One journalist who criticized Taib was Clare Rewcastle Brown, who lives in London but was born in Sarawak. She is the sister-in-law of Gordon Brown, the former Labour Prime Minister of the U.K. In 2011, Rewcastle Brown was subjected to a series of smears by a blog called Sarawak Bersatu, which described itself as representing a “group of Sarawakians who aim to protect Sarawak against the influences—and hidden agendas—of foreign political groups and activists.” Material posted on Sarawak Bersatu, and on a related Twitter feed, impugned the motives and the reporting practices of Rewcastle Brown and called her an agent of British socialism. The site promoted stories falsely claiming that one of her colleagues had engaged in sexual improprieties. According to a former Bell Pottinger employee with knowledge of the site, the firm generated Sarawak Bersatu’s material. This was “fake news” before it had a name. When I informed Rewcastle Brown that Bell Pottinger was behind Sarawak Bersatu, she said that she had “no idea this was being run out of London.”

A former Bell Pottinger partner expressed shock when I described the Bahrain and Sarawak accounts. It was possible, he said, to draw a straight line between these episodes and the South African scandal. The partner said the Sarawak work suggested that certain people within Bell Pottinger had “a playbook.”

One publicist who helped write the Bell Pottinger playbook is Mark Turnbull, who worked at the firm from 1995 to 2012, and often focussed on geopolitical accounts, including in South Africa and Iraq. He subsequently became a top executive at Cambridge Analytica, the British firm that advised Donald Trump’s 2016 Presidential campaign. The company fell apart earlier this year, after its harvesting of Facebook user data was exposed. Shortly before Cambridge Analytica’s collapse, undercover journalists at Channel 4 News, in London, secretly recorded Turnbull describing his modus operandi. He bragged about the deployment of misinformation against a client’s political opponents. “We just put information into the bloodstream of the Internet, and then, and then watch it grow, give it a little push every now and again,” Turnbull explained. “It has to happen without anyone thinking, That’s propaganda. Because the moment you think, That’s propaganda, the next question is: Who’s put that out?”