Today the Bloomberg news service released details from Malaysian investigations into a matter long suspected by observers of the 1MDB scandal, namely hanky panky surrounding the original bonds raised in May 2009 by AmBank to launch the fund’s forerunner the Terengganu Investment Authority (TIA).

Those bonds worth RM5 billion ($1.2 billion) were originally sold by the sovereign fund at a considerable discount of 13%, despite an usually attractive high rate of interest.  That meant a considerable loss to the fund and many have questioned whether intermediaries had stood to benefit.

The advisor to the fund was PM Najib Razak’s proxy Jho Low and today’s leaked information to Bloomberg has apparently confirmed an extraordinary pattern of dealmaking by AmBank on the bonds that enabled Jho to skim a whopping $126 million from the fund out of those sales.

Thanks to close orchestration by a number of parties, which appears to have included banking officials, 3.8billion ringgit of the original TIA notes were sold to a Thai company called Country Group Securities at a discounted rate of 87 ringgit for 100 (the remainder of the issue was bought by a Singapore company and the bank itself at the same discount rate).

Yet, within 24 hours all these bonds had been resold by those parties for a fat profit, according to documents obtained by investigators.  AmBank apparently assisted in arranging those instant resales for 100 ringgit to 105 ringgit to local investors.

Following which, lo and behold, Country Group issued a third-party transfer instruction to AmBank to pay $113 million of the windfall to a Singapore company named ACME Time, which Sarawak Report has already identified as being under the control of Jho Low through his proxy Eric Tan.  A further $12.6 million was paid to ACME Time in July 2009.

AmBank, which had bought RM500 million of the bonds at the same discount was also in position to have made a similar huge sum, which must certainly have generated good bonuses. RM700 million went to the Singapore company.

So, unless the Bloomberg story is entirely false, despite providing the most likely explanation for the strange pattern of sales, AmBank was involved every step of the way and also involved in the profiteering. It makes its position every bit as awkward as that of Goldman Sachs, which performed a similar role during the later bond issues by 1MDB leading to investigations by the FBI leading to criminal charges from Malaysia as well.

This is not the only embarrassing 1MDB related matter that has entangled AmBank. The bank was also the key player in the buy out of UBG by a bogus subsidiary of 1MDB’s first bogus joint venture partner, oil firm PetroSaudi thereby netting healthy profits for Jho again, who had invested in the Chief Minister of Sarawak’s family company.

During that sale Sarawak Report has detailed how faced with political pressure the bankers involved overlooked time and again glaring irregularities, including the fact that the so-called PetroSaudi subsidiary that was allegedly buying UBG was in fact an entirely separate bogus off-shore company trading off an identical name.

None of this could have escaped the scrutiny of the hierachy of AmBank in KL, particularly given the massive sums involved. These were the top deals at the bank at the time. And it is this fact that demands an investigation and explanation from the Australian financial regulators known as  ASIC, because the majority shareholder of AmBank is the leading Australian bank ANZ.

Sarawak Report has already pointed out along with others that all the top ranking officials stationed to managed AmBank in KL were on secondment from ANZ’s Sydney headquarters, a matter advertised as a badge of strong managment by the then Head of ANZ, Mike Smith, who had presided over the expansion of ANZ into Southeast Asia.

Mike Smith, like Goldman Sach’s Lloyd Blankfein, surprised many by taking an early departure from his Chief Executive’s post, just as the 1MDB issue started to hot up around his bank. A number of other key Australian executives have also moved on to greater things, including the former AmBank Chief Financial Officer, who has taken up a leading job in another financial group. The AmBank CEO of the time Ashok Ramamurthy relocated back to Sydney early.

However, despite persistent and compelling information that all such senior officials in KL along with ANZ’s own top brass had to have known about the massive transactions and also the huge sums that later poured into Najib’s own personal account at AmBank, there has been no announcement of an official enquiry by ASIC or investigations into malpractice.

Mike Smith’s successor as CEO Shayne Elliott told Australian MPs when questioned that ANZ’s seconded staff in KL had no duty to report back to ANZ or apparent duty to maintain standards of due diligence, despite ANZ’s largest single 20% shareholding in the bank:

“Once those employees are seconded there, they essentially sever their ties with ANZ almost 100 per cent,”

That claim by the bank’s head honcho was made in October 2016, since when the full nature of the scandal has become increasingly and unavoidably clear. Other banks have been investigated, punished, fined by different regulators and Goldman has apologised and admitted money was misappropriated from the bonds it raised.

Sarawak Report has also showed that ANZ’s own PR has contradicted the claim about the severing of ties: 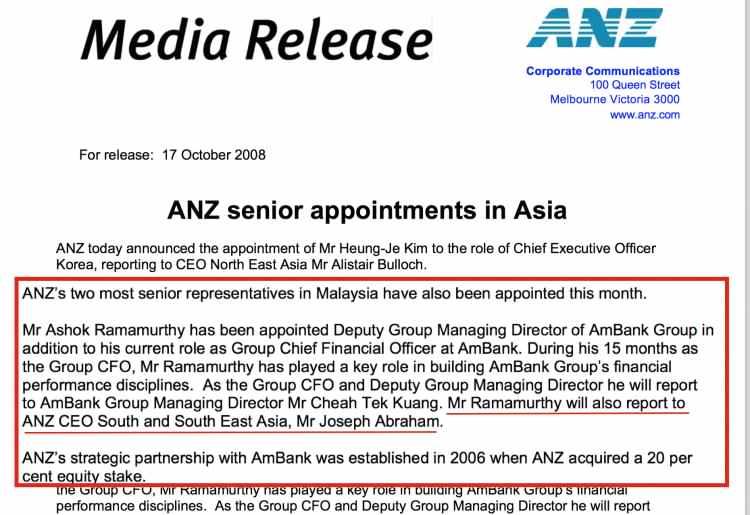 “Mr Ramamurthy will also report to ANZ” – not so ‘severed’ after all!

The Australian prime minister at the time of the 1MDB misappropriations, Tony Abbott, tweeted his disappointment that Najib Razak (whom he described as a ‘good friend to Australia’) was defeated on May 9th.

However, Abbott’s successors ought to wake up to the fact that matters have moved on and slowly and inexorably investigators from the new government of Malaysia are turning up the details of exactly what happened at AmBank during the course of the 1MDB scandal.

That looks likely to include ANZ’s role in the affair and in any cover-up conducted by the Australian bank, including failures – deliberate or otherwise – on the part of the Australian regulators.