This weekend a delegation of Sarawak villagers came to KL to try to explain to ministers in the new federal government how things still are managed in Sarawak.

For example, they related to Sarawak Report that the previous week around a hundred village folk from Sungai Lingkau, Simunjan (many of them elderly women and children) had ventured into a plantation grown on lands that had been alienated from them against their will.  They planned to harvest some of the ripe palm fruit, since they considered it theirs by right.

However, as they were about to drive away with their one truck of collected fruit they were set upon by what they say was at least twice as many strongly built Indonesian plantation workers, who they say are indirectly working for the plantation company to harvest the area themselves.

Give away price? Hydroflow, managed by Naroden, acquired the disputed timber and then plantation land for Hydroflow back in 2004 for a derisory RM500 per hectare?

The aggressive men, armed with parangs, knives and pikes, wasted no time in driving their own vehicles up to the villagers’ truck and forcefully removing the fruit into their own lorries, say the villagers.

The owner of the truck, headman Senabong Anak Sampai, says his own vehicle was badly damaged in the process – one more blow to these dirt poor folk who have received virtually none of the wealth from the timber grabs followed by plantations on their Native Customary Lands.

The clash was managed by a bunch of supposed law officers, who they say pitched up with the thugs and held the villagers at bay, to fortunately at least prevent people from being hurt. However, the villagers say the officers favoured the plantation thugs and allowed them to take the fruits of their day of hard labour harvesting the trees. 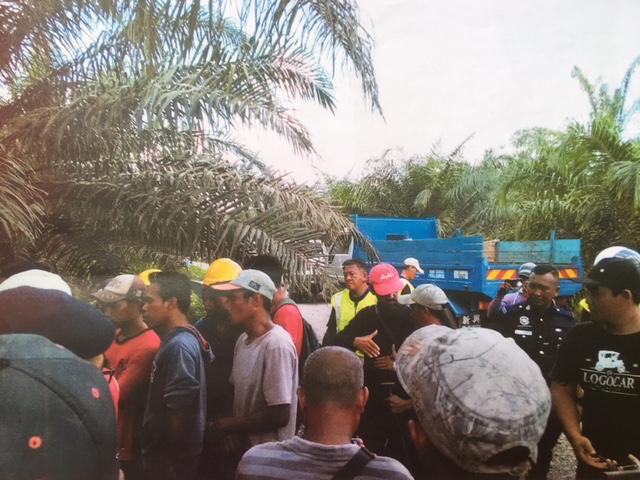 That is not surprising, because these were so-called ‘Polis Bantuan’, auxiliaries who dress up as officers and drive around in vehicles marked with Polis logos and carry truncheons and handcuffs, but who are not in fact trained or entitled to full police powers.

Classic advertisement by a plantation company for Polis Bantuan – whose interests are they likely to represent?

More to the point, they are recruited and paid by none other than the plantation companies themselves, to whom the Royal Malaysian Police have farmed out the exercise of law and order in such areas, even over matters pertaining to their own disputes with local people.

The actual police did not manage to turn up till some two hours after the raiders had made off with the fruit gathered by the villagers, the locals told Sarawak Report.

This incident was photographed and filmed however, a growing practice by villagers in these clashes with has helped to at least alter some of the imbalance between them and the wealthy plantations, whose thug tactics are now being fully exposed.

So, what is the background to this dispute, one of over 400 such cases that have been brought before the courts in Sarawak? The Headman involved took Sarawak Report and former Radio Free Sarawak DJ Peter John Jaban through the details of the villager’s dispute with the plantation company.

The fact seems to be that neither side should be harvesting the land at this particular time, because of an injunction laid by the courts pending a resolution of the case. However, that injunction has laid idle for a decade, during which time the company has infuriated the local people by conducting business as usual in defiance of the order – using the third party workers to distance their involvement, the villagers claim. 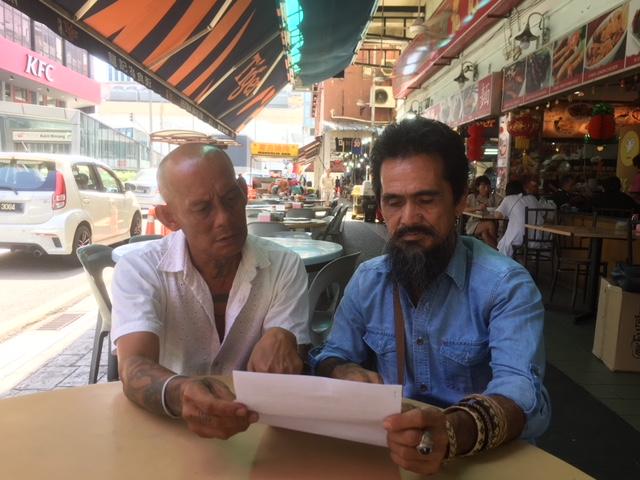 The land, says Senabong had originally belonged to the village people under Native Customary Rights, but had been secretly appropriated behind their backs by a few locals working together with the plantation company. 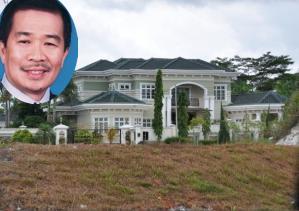 The NCR territory then ended up as part of a vast landbank under the control of one of a duo of mirror plantation companies in the land register originally registered to Naroden Majais, an assistant minister and former civil servant known to be close to Governor Taib Mahmud.

The extent of the lands acquired by Naroden Majais is truly shocking and was first exposed by Sarawak Report back in 2012 after we obtained a copy of a document which ought to be transparently available to the public, but which the Sarawak State Government has attempted to keep as a secret document, namely the Land Register.

Challenged over Hydroflow’s appropriations just a short while ago Naroden Majais confirmed that the project had been ordered by Taib Mahmud. It was promoted as part of a supposed small shareholder project to benefit local people, who were given stakes in 30% of the land through two companies, which were none the less fully controlled by the major shareholders.

Much fanfare was made as Taib’s daughter presented those minor shareholders with a ‘dividend’ in 2011, which amounted to a mere RM200 for the entire year in return for the loss of their valuable timber and lands.

Majais has said he merely facilitated the project and he had no vested personal interest in the land appropriation and welcomes a review by the Malaysian Anti Corruption Commission (MACC) to clear up the dispute, following the lodging just last week of a second police report against him alleging corrupt practice.

Meanwhile, he admits most of the native owners have now surrendered their single shares for a derisory sum – so much for a people’s cooperative project.

““Almost everybody (the villagers) decided to sell off their shares to the investor for RM7,600 per share some time before the last Hari Raya Aidilfitri, and after the 14th general election.” [Borneo Post]

However, in the case of the land taken from the villagers harvesting last weekend, the villagers say that an Appeal Court ruling has placed an injuction on the land for some ten years, pending a final decision on their own case.  It has meant that once again justice has been skewed to benefit the company, enabling it to harvest the land as usual in the meantime with the help of a little subterfuge.

As far as the villagers were concerned, their attempt to load up just one small pick up truck with the fruit was their attempt to even out the situation and gain a small benefit from their land after ten years without a final ruling.

Their’s is just one story that exemplifies the way things are managed in Sarawak in favour of business and political interests against the rights of the local land owners and amidst murky secrecy that sees vast wealth acquisition for those around Taib Mahmud and dire poverty for the vast majority of the people of Sarawak.

The new Harapan government may say that responsibility for land management is retained by the state government, however matters of law and order and corruption are under the purview of the federal authorities and this, along with all the other similar outrages, deserve proper investigation as soon as possible.