Wealth Wins Political Favours For The Taibs In Canada.....

When reports emerged of a preliminary finding by the OECD (the international organisation which monitors good economic practice) that threatened to force the Taib family company in Canada to open its accounts to public scrutiny, SAKTO boss Hisham Murray appears to have picked up the phone to an influential friend in politics, according to a devastating article by the Canadian news site Ricochet.

Murray (known by his birth name Sean) is married to Sarawak Governor Taib Mahmud’s eldest daughter, Jamilah and they have managed this branch of the Taib family investments in Canada, the US and Europe since leaving college in Ottawa, where they met in the 1980s.

SAKTO has posed as a Murray family firm, but it is clear that the money that launched it came from Taib himself and the Swiss anti-timber corruption NGO, Bruno Manser Fond (BMF) was pressing for further information on how much more of the cash flowing in to the company was laundered out of kickbacks from Sarawak’s various timber, plantation and construction concessions that have turned Taib Mahmud (a mere salaried public official) into the leader of one of the world’s wealthiest families.

Based on its own definitions of what constitutes an international company the OECD contact point team in Canada initially decided to recommend that SAKTO was indeed under a duty of full public disclosure (the ‘family company’ has closely guarded information about its finances, taking advantage of Canada’s lamentably opaque company information laws).

This is what Sarawak Report wrote back in 2017 on the matter:

This extensive and detailed  11 page document upheld each and every one of BMF’s concerns and denied counter-arguments put forward by Sakto lawyers during the negotiating process.

Its stark recommendation was that the OECD should proceed to a full review of the Sakto Group and the complaints relating to its shortcomings, referring in the process to OECD guidelines supported by the Government of Canada [Canada A Magnet For Dirty Money – Sarawak Report]

The individual to whom Sean then directed his call, as his lawyers have now acknowledged to Ricochet’s reporter Tim Wilson, was the Ottawa MP Andrew Leslie, who has now issued a statement admitting he responded to Sean’s request by seeking to influence the OECD position on the matter.

“Sakto reached out to Andrew Leslie as the Member of Parliament at the time for Ottawa-Vanier to make him aware of the OECD proceedings,” wrote lawyer Duncan Fraser in an email.

In a personal letter to the Murrays dated May 28, 2018, Leslie said that they had asked him for help as the MP “overseeing the Ottawa-Vanier riding office” in November 2016. Leslie recounted that the Murrays had drawn his attention to “the troubling campaign against you and your family by the Swiss activist group Bruno Manser Fonds.”

Leslie apparently started lobbying on SAKTO’s behalf in the matter with the Minister of International Trade. At the same time the company’s lawyers made submissions to Canada’s Deputy Minister of Justice.  The pushback clearly upset the team at the OECD, which revealed at the time to the Bruno Manser Fund that it was dealing with “extensive commentary from Sakto’s legal counsel’ which was causing delay in finalising its draft findings.

In fact, the OECD at the time complained at this very interference:

The first time that Canada’s OECD NCP came to a decision about the Sakto case, it issued a statement that differed in major ways from the one issued in 2018……

The statement also listed problems that had arisen during the NCP process. It was critical of Sakto for mounting an “aggressive challenge of the NCP’s jurisdiction,” noting that Sakto had involved an MP in the confidential process and that Sakto’s legal counsel had made submissions to Canada’s Deputy Minister of Justice. BMF was chastised for breaching confidentiality during the process by publishing an initial draft assessment and for drawing inappropriate media attention to it.

Eight months after the NCP’s decision, Leslie wrote his letter to Champagne. In it, he defended his intervention in the NCP process and told the minister of international trade that BMF had a “vendetta” against Abdul Taib Mahmud, who remains a controversial political leader in Malaysia. [Ricochet]

Leslie’s objectivity in the matter is questioned by Ricochet’s revelation that the MP is a neighbour of the Murrays (who live in Canada’s second largest mansion in Ottawa’s most expensive Rockcliffe area) and admits to being a family friend.  When his daughter came to London she was fortunate enough that the connection enabled her to find a place to stay in one of the Murray’s posh Fitrovia developments in the centre of the capital.

Nevertheless, the zeal with which the MP pursued his aim of protecting his friends from a ‘vendetta’ of public scrutiny by the Bruno Manser Fund (which campaigns for indigenous rights in the face of timber corruption in Sarawak) is surely quite exceptional, in that he even went after staff at the OECD involved in the report.

It seems to have worked a treat:

Leslie then suggested that the minister’s office “conduct an investigation into the conduct of the relevant officials” handling the NCP process. It is unknown if anything came of this proposed investigation.

But the NCP revised its statement and released another final decision — this one several pages shorter than the original.

All references to “multinational” were removed, as was any mention of Sakto involving an MP and making submissions to the Department of Justice. The criticism of BMF for releasing the initial draft document remained.

Whereas the draft OECD report had recommended that SAKTO was an international company involving inter-country transfers of cash and therefore ought to open its finances to scrutiny, the revised version concluded the opposite and did not recommend SAKTO publish its finances.

The Ricochet report draws parallels with another example of what the OECD’s top bribery official has criticised as “interference with prosecutorial autonomy” in Canada where  powerful companies seem to have a record of calling on political allies in government to intervene in ostensibly independent processes. The separate scandal was the SNC-Lavalin affair.

Following this strong-arm slap-down of BMF’s attempts to make the OECD code of conduct apply to SAKTO in Canada (as Canada is comitted by treaty to do) a court ruling also denied BMF’s attempt to get the multi-million dollar international company SAKTO to publish its accounts (in the manner that any small UK company is bound to do).

The MP wrote personally to his friends after their successful operation to get the OECD to completely alter the recommendations in its report:

Writing personally to the Murrays after the committee’s decision, Leslie stated that he was glad to have been “able to assist you in raising this issue with the Minister of International Trade and his department.”
“This entire process must have been extremely difficult,” said Leslie in the letter, dated May 28, 2018, asking the Murrays to “accept my congratulations and my thanks for your community engagement.”

After all, the hugely wealthy Taib-Murrays are well known as major donors to the political parties in Canada and even bigger donors in the local charity world. Jamilah frequently appears at Ottawa’s ‘high society’ events decked in furs and diamonds. The MP seems suitably in awe of what others might call strategic generosity, given the point blank refusal of this family to open up its books. 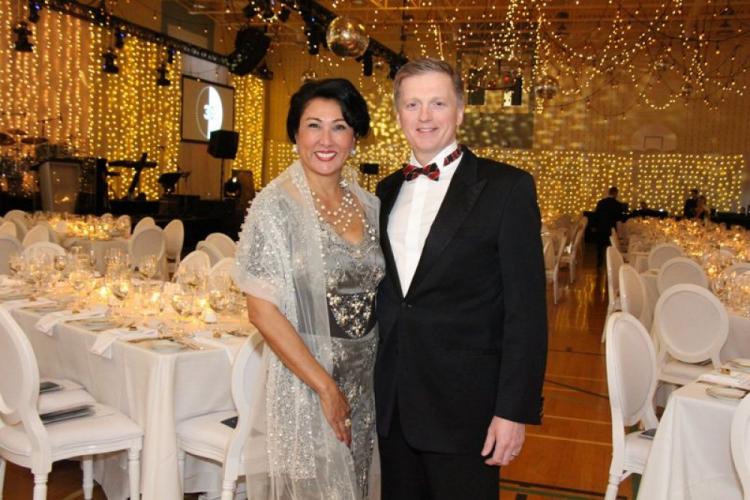 The Murrays have treated these rulings as a ‘vindication’ against criticisms of the Taib family empire and related timber corruption issues and have now retaliated with an aggressive libel case against the Bruno Manser Fond, claiming the NGO had no right to publish any of its concerns over indigenous rights abuse and corruption in Sarawak or Taib Mahmud’s mysterious family wealth in the light of his total economic control of the state for several decades.

The Murrays are appealing against a failed injunction against all articles on the subject produced by BMF (as a prelude to their attempt to get them banned altogether) and are also seeking to ban the long since published book Money Logging via a court case currently underway in Switzerland.

It promises to be a very, very costly legal case. But we all know that Hisham has the money…. somehow.