Sarawak Report has viewed extensive evidence, provided by PRS Party whistleblowers, that indicates the online portal Dayak Daily, which purports to cover news favouring the interests of local people in Sarawak, is secretly a propaganda tool for PRS paid for out of state government grants to PRS politicians that are meant for rural development projects.

The portal, which does not openly declare its backers nor its ownership, is clandestinely controlled by senior PRS officials, according to the information viewed by Sarawak Report.

For example, the company that applies for press passes for reporters on behalf of the portal is called Pantas Sejahtera Sdn Bhd, whose directors are a senior PRS politician, Wilson Nyabong Anak Ijan and Ammelia Trish Anak Umbi, who is understood to be an ally of the Deputy CM James Masing. The latter owns the majority of the shares: 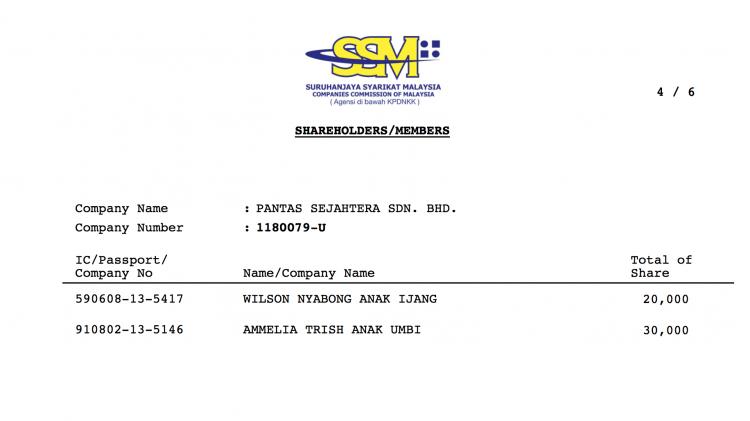 The owners of Dayak Daily

Sources close to PRS have testified that the main people involved in managing the portal are PRS leader and Deputy Chief Minister James Masing, PRS Assemblyman John Sikie Anak Tayai, Wilson Nyabong Anak Ijang, Snowdan Lawan and other members of the PRS Supreme Council. They claim the purpose of the site is to benefit the political fortunes of the party and to run down its political enemies.

Numerous messages circulated within a WhatsApp group that comprises all the party’s YBs have allegedly emphasised the value of Dayak Daily in propagandising PRS amongst voters and asked for payment to support it.  For example, in one WhatsApp message circulated to the group on 6th March 2018, during the run-up to the federal election, PRS assemblyman Snowdan Lawan stated:

“Dear PRS YBs… Dayak Daily or our DD portal news is among the most popular in strong portal news read by most people nowadays… [sic] pls do contribute generously to fund our DD…. pls find ways n means to do so….tqvm for yr attention…will prepare mine soonest” 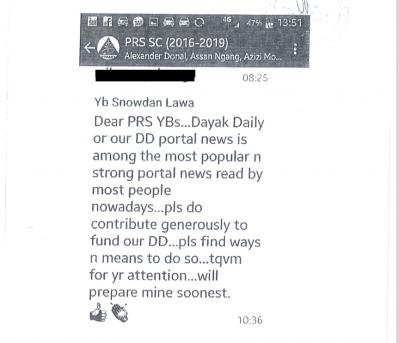 For example, earlier in the day at 07.44am, March 6th 2018, the group chat received this message apparently forwarded from James Masing by John Sikie Anak Tayai clearly requesting that all the 18 YBs in the chat group should aim to donate no less than RM20,000 ringgit from their pusat khimat funds towards the news portal:

Shortly after, on the same day a further message was circulated via the same chat group by Wilson Nyabong Anak Ijang, indicating that the hefty donations should be made to what was described as Dayak Daily’s account at Maybank held in the name of an apparent NGO called Kelab Penulis Dayak Kuching (Kuching Dayak Writers Club). 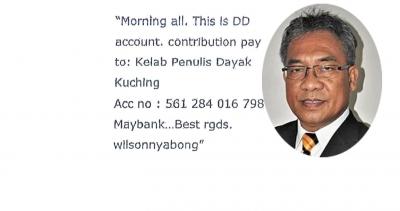 Research has shown that there is no such NGO or society registered under this name or any variation of it, even though it is mandatory that donations to projects by these YBs from their state supported funds must be submitted to the Implementation Coordination Unit (ICU under the Chief Minister’s office) to be approved.  Cheques are then issued directly by the Treasury to the NGOs’ bank accounts (for direct grants) or the implementation agencies and companies (for projects).

Despite the lack of official status and apparent approval of the payments, investigations into the Maybank account show that the account number referred to does exist under the name of ‘Kelab Penulis Dayak’ (minus the word Kuching).  The account accepts payments, although it is unclear whose name supports this unregistered entity.

It is at present entirely unclear, say opposition figures who are now examining the issue, how such an account could have been opened with Maybank in the name of an apparent society or company that does not actually exist.

Nevertheless, it seems clear from further messages that were allegedly circulated by the same WhatsApp chat group that at least RM240,000 transferred into to the portal from these YBs in 2017 alone. This according to one table of payments also seen by Sarawak Report. 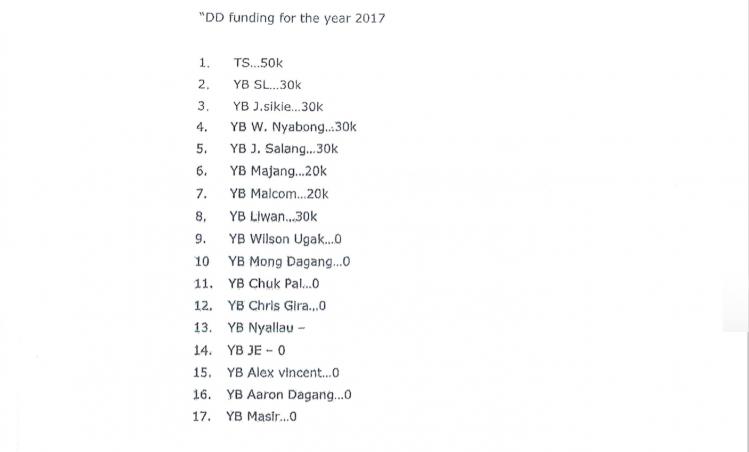 The apparent diversion of such huge sums of public money might provide an explanation to local folk, who may have wondered why so few of the benefits promised to the constituents of the winners of state elections in Sarawak have manifested in ‘projects’ that the state government claims will lift their lives?

Of course, PRS YBs appear to be abusing a system that is already unconstitutional and indefensible in the first place. Under the present system, only the YBs from the winning parties in Sarawak’s ruling coalition get these grants for so-called Minor Rural Development Projects and also Rural Transformation Projects, which are outrageously denied to the representatives of parties from coalitions which obtained less overall seats.

Presently these grants are worth RM2 million and RM5 million respectively per year to representatives of the ruling coalition only. On top of that there is another grant of RM1 million which goes directly to each of these favoured ‘winning’ YBs to help their constituents to “repair” their houses.

Totting up those figures, these beneficiaries achieve an individual extra budget of RM8 million, available to each of the GPS (the current ruling coalition in Sarawak) representatives.

Given there are 19 GPS federal MPs and 70 State Legislative members, these grants alone cost the taxpayer no less than RM712 million each year – available only to representatives of ‘winning’ parties.

Let Sarawak Report assure voters in Sarawak and Malaysia that in a proper, law-abiding democracy each and every voter, along with their elected representative, must be treated equally, whether or not their party is the over-all winner in any given election.

That basic, constitutional principal outlaws the disgraceful practice of giving multi-million grants to only the YBs from majority parties and these crony payments ought to have been long since challenged in a court of law.

Meanwhile, further evidence brought forward by the whistleblowers from PRS show that these YBs were subjected to constant harassment by their own leading figures to abuse this already abusive system further by diverting this public money into Dayak Daily.

Certain YBs who protested reluctance in the WhatsApp chat group were pushed harder to break the rules.  One YB replied to the requests on 6th March 2018 pointing out the requested payment was not permitted:

texted YB William Nyalau Anak Badak. Wilson Nyabong Anak Ijang soon got back to put him straight, asking him to follow the example of other YBs who had paid up:

“Good morning YB Datuk.  You can use your grant Contribute to: Kelab Penulis Dayak Kuching, Maybank acc. no 561284016798 or you can ask YB Datuk Joseph Salang how he contributed his….rgds. wilsonnyabong”

Sarawak Report has now learnt that one of the alleged political targets of the Dayak Daily has issued legal procedings against the portal. Engkilili assemblyman, Jonichal Rayong, who claims to have been defamed, has named James Masing and a raft of his fellow PRS YBs amongst a slate of defendants whom he accuses of being behind Dayak Daily.

Brought forward as evidence are witness statements from at least two former PRS members relating to the payments being demanded for the news portal, according to information obtained by Sarawak Report.

If there is one good thing to be taken from this sorry tale it is evidence of the abuse that could have already been guessed of resulting from such special funds to favour only the ruling parties.

It is now clear that constituents have been equally cheated by their government in Sarawak, whether or not their chosen representatives are in BN/GPS or not. All voters in Sarawak ought therefore have an equal interest in voting for a reforming agenda in the future.