Cronyism, Kickbacks and An Eco-Catastrophe - The Story Of Murum Dam

Idris Buang, who has himself combined various public and private offices with political roles, complained that the appointee has been a known member of PKR and would therefore be biased.

Perhaps the assemblyman, who has been linked to a number of high profile controversies is fearful of more active investigations into the Sarawak scene?  For example, Sarawak Report  has received details of one report to the MACC last year, which has yet to be acted on, relating to the clearing of timber worth a billion ringgit from the Murum Dam basin through a contract granted by Sarawak Energy (SEB) while he was on the board.

The irony is that there was virtually no case in terms of energy supply for SEB to build the Murum Dam, which has destroyed huge areas of virgin forest. Bakun itself was just completed and has yet to be put more than half its use as it struggles to find users for its existing electricity.

But according to one of the earliest contractors on the project, the Dutch logging and timber merchant Roel Seugling the construction of Murum was never about hydro-electricity anyway:

“The reason for Murum was not the electricity.  It was 100% about the wood and the access that building the dam gave to 100,000 hectares of virgin jungle behind on the other side. One survey worker said to my face that they would clear that land within ten years because now they can float the logs across the water of the lake.
The only other purpose was the purchase of huge amounts of cement, which was being charged to the project at an outrageous premium by the monopoly holding company CMS [owned by the family of the Sarawak Governor, then chief minister, Taib Mahmud] “

It was Roel Seugling who received the first contract to clear the timber from the dam basin itself, initially an area of 6,500 hectares of prime virgin jungle. In the case of mega-projects like a dam the logging can be described as ‘clearing of biomass and debris” for an infrastructure project rather than ordinary logging, which requires more regulations, Seugling explained as he passed a dossier of documentation to Sarawak Report, including the contract for the logging.

A Billion Ringgit Worth Of Timber

The Dutchman, who has worked some 25 years in East Malaysia, confesses that he was extremely excited by the project, which presented the prospect of enormous riches for his company and backers who raised 5 million euros (RM23m) to equip a full scale operation to take out what was officially calculated would amount to 150,000 tons of logs with a conservative value of RM90 million. In fact, with virgin forest being up to 6 times more abundant than normal logging, he was looking at far greater profits.

Under the contract he agreed that 40% of these projected profits would go to local Penan: needless to say even these conservative amounts were never passed to the native people and he does not believe the tribespeople were informed about the proposed deal: 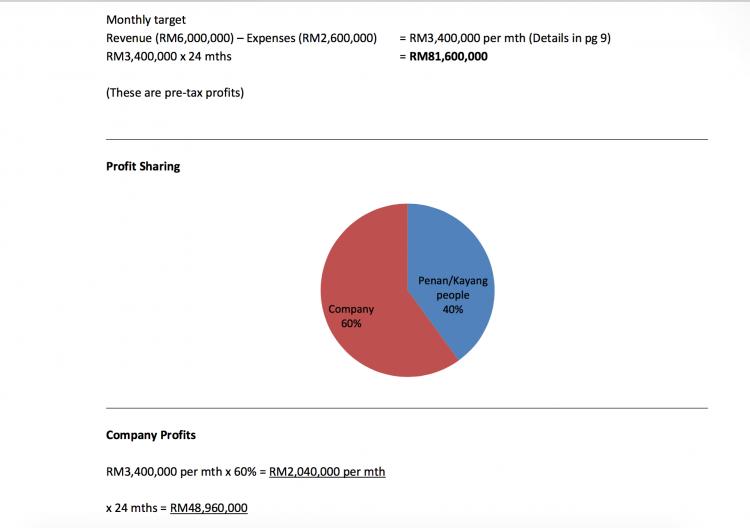 The figures Roel Suegling used to target investors for the project

However, in a later letter of complaint to subsequent chief minister Adenan Satem, Seugling calculated that the wider contract, which involved the logging of 25,000 hectares of pristine virgin jungle, should have netted him a staggering profit of RM891,000,000 – nearly a billion ringgit:

Seugling had also written several earlier emails to Taib Mahmud’s office complaining he had been unfairly forced out of the project and describing how he had spent the outlay of over 5 million euros, which he now says he is owed in compensation as bigger fish came in to strong arm him out of the profits:

Seugling has openly acknowledged to Sarawak Report that the above mentioned ‘Signing money’ and ‘Entry fee’ were cash bribes for obtaining the contract and he has named who he claims were the key political persons involved.

Seugling wrote Taib several emails, as he considered him as the CM to be the ‘big boss’ behind the Murum project

As Sarawak Report has often had reason to report, sub-contracting is the name of the game in Sarawak, enabling political ‘rent-seekers’ (often in the guise of their wives, children or other relatives) to get a fat slice of the public money before the actual work is given to someone else.

The case of the SEB contract for ‘Clearing Biomass’ for the Murum Dam would appear to be a typical case in point. Idris Buang and his fellow board members apparently signed off the contract to a crony company already identified by Sarawak Report, as a regular recipient of Sarawak projects, namely Sarabrand Sdn Bhd, which was half owned by none other than the local PRS MP for the Murum area at the time, Billy Abit Joo. 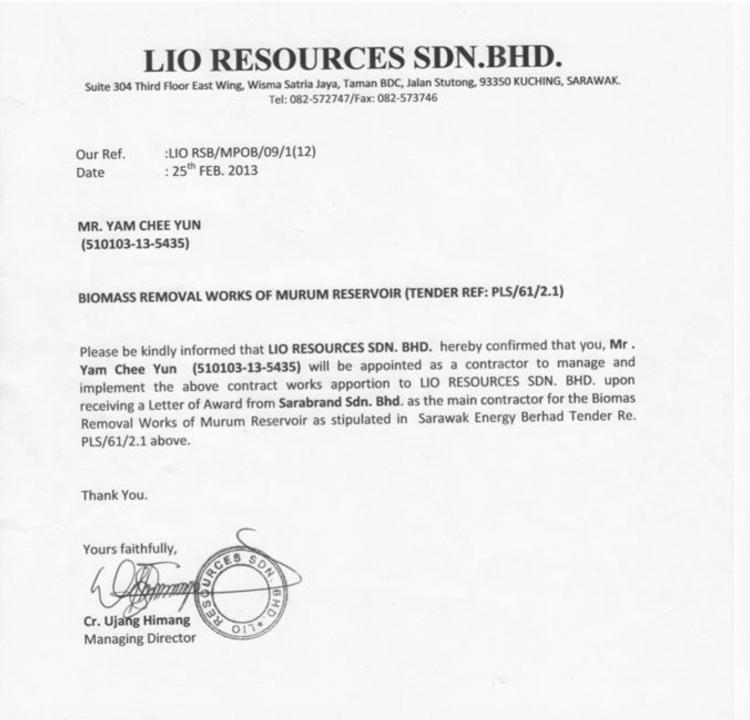 However, the MP was plainly too busy to do the actual work of clearing the area belonging to his constituents, so documents indicate the work was then sub-contracted to a second company named Lio Resources Sdn Bhd.

Company information shows that Lio Resources is in turn owned by the local PRS Assemblyman for the area Liwan Lagang, plus the second shareholder of Sarabrand (local businessman Henry Opang Luhat) and a Kuching councillor named Ujang Himang, who Sarawak Report is informed just happens to be the son of Billy Abit Joo. 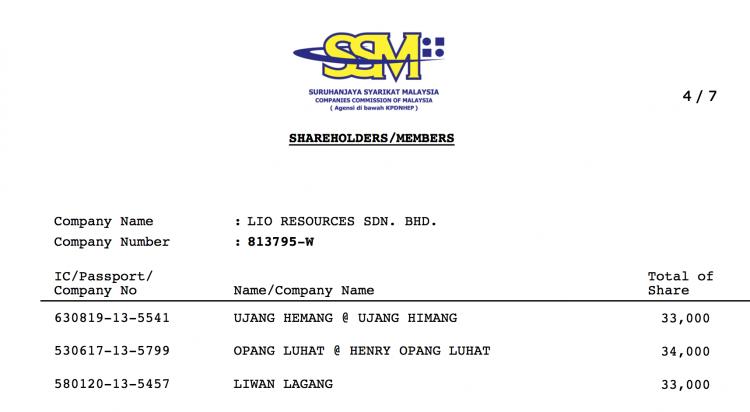 Like the MP, it appears the Assemblyman was also too busy or unskilled to get down o the business of performing the actual contract, which is where Dutchman Roel Seugling and his long-term business partner in the logging business Yam Chee Yun got their opportunity.

Seugling has explained to Sarawak Report that he and Yam had previously cut down a valuable belian tree concession (logging of belian is of course supposed to be banned) granted to the Assemblyman’s brother in the area, Semut Lagang. The whys and wherefores of timber concessions in Sarawak have, like other public contracts been kept closely under wraps from the public eye, forcing ordinary unconnected folk to rely on leaks such as this one: 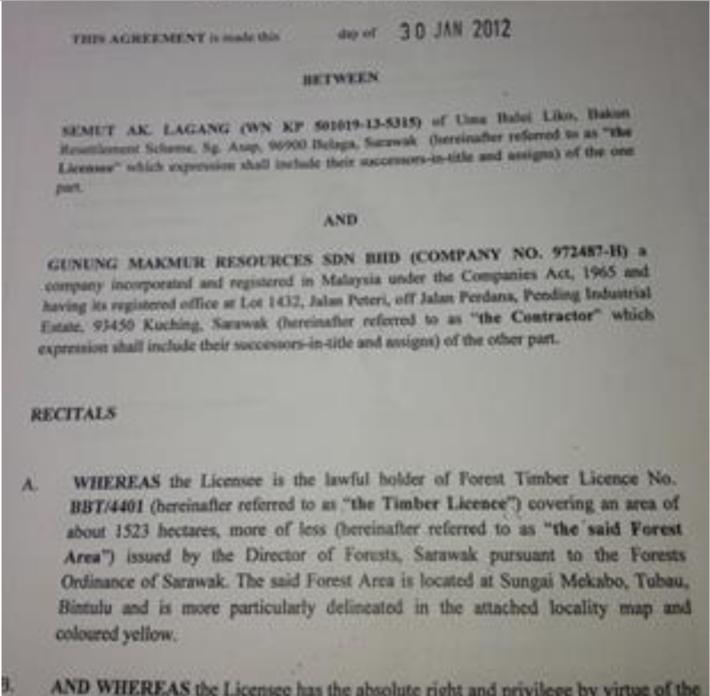 The belian project had ended unhappily however, since the company’s equipment was stolen. As a ‘reward’ Seugling says the logging specialists were told that Yam’s contact in the matter, the well-connected ‘VIP’ Liwan Lagang, would arrange the Murum clearing project to come over to them, in return for an “signing fee” payable in cash of RM780,000.00 plus 20% of final profits.

Raol Seugling has acknowledged to Sarawak Report that he paid the upfront fee (translating to 190,000 euros) through his Dutch ING bank account into a local bank account in Kuching held by his company Asia Ace Resources.  This was removed in cash by his local business partner and then allegedly handed in three amounts to Mr Yam, who claimed that he had passed the cash to the assemblyman. Sarawak Report has sought a response to this claim from Liwan Lagang, but not yet received an immediate reply. 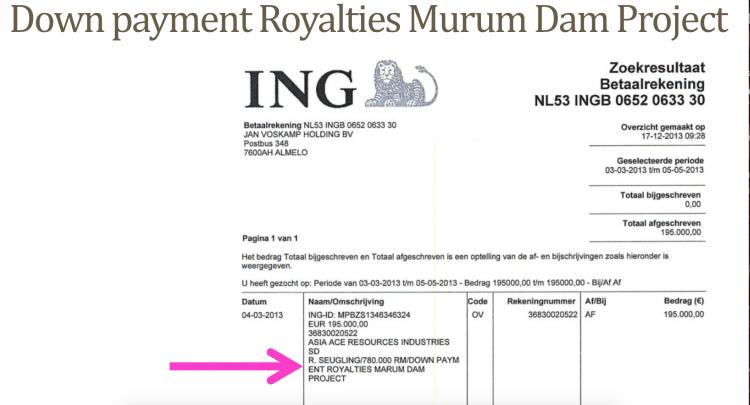 The bank was informed that the money was for ‘payment of royalties for the Murum Dam Project’ at the time of the transfer in December 2013, as is detailed in the statement.  A second payment was made of just over 23,000 euros which Seugling acknowledges was to pay off “certain officials’ to the tune of RM100,000 as well. He described this to the bank as “Murum Dam Signing Money”: 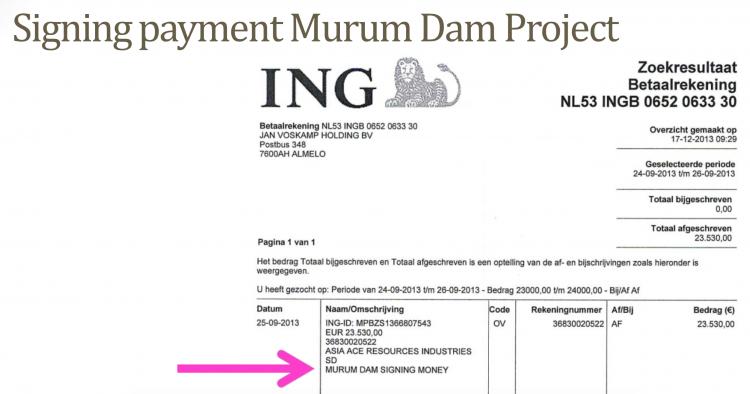 “Problem is Shin Yang is under CM – we can’t argue with them!”

At this point the Dutchman says matters started to go wrong. Logs were soon being ripped out and great quantities had been floated across the rising waters of the dam (eventually the camp belonging to protesting native Penan people was also washed away along with their homes as well).  However, the loggers found they could not remove them from the area because the 70 mile road leading from the dam to Belaga belonged to the logging company Shin Yang.

The Shin Yang managers had viewed the vast piles of lucrative timber and decided to flex their muscles, putting in ‘a complaint’ Seugling was told, to the Forest Department. Until the matter was resolved the logs could not be transported and Shin Yang, whose owners are known to be extremely close to then chief minister Taib Mahmud, was demanding extortionate charges for Lio Resources to be allowed to use the road.

Having received huge sums from their foreign investor it turned out that Lio Resources were not too bothered about defending their position. Seugling at first begged Yam to tell their ‘VIP’ contact Liwan Lagang to use his supposed influence with his ‘big boss’ the chief minister to at least repay the huge outlays by Seugling as the financier of the project.  However Yam replied that he and Lio Resources had decided to ‘surrender’ the project.

A series of desperate texts recorded by the Dutchman explain the reasons why Yam and his political contacts were no longer fighting for the contract: “problem is Shin Yang is under CM – we can’t argue with them” ran one of the texts, “VP [Lagang] also suggest to me to give up on this project”:

I have too much information

The Dutchman protested that the Assemblyman and Chief Minister must meet to deal with the situation, threatening he had too much information for them to ignore his plight. However, Yam and his other associates melted away he says and he never heard from them again.

Likewise, several emails to Taib Mahmud were merely passed to the Forestry Department, where they were not answered and Liwan Lagang also failed to respond to emails. Seugling says he has a dossier of documented evidence and recordings to substantiate his claim and the project, including numerous film and photographs of the logging his company conducted.

However, he received no support and his Kuching lawyers refused to continue the case once they saw the letters he had writen to Taib Mahmud complaining about Shin Yang’s strong-arm tactics in taking over the timber from the concession.  He has lost his 5 million euros and equipment, as well as the ‘upfront royalty payments’ without compensation.

However, according to Roel Seugling, this billion ringgit project was just the start of the logging made possible by Murum.

“The Shin Yang manager, who pointed a pistol at my colleague across his desk, flew up to the site in a company helicopter to view the situation and that is when I think they decided they would take the timber.

I have one of them on record saying to me that once the water is up on the lake they could float the logs across to their logging road without difficulty. There is 100,000 hectares of virgin forest there and he told me they can clear it within ten years easily. The Murum Dam is 100% about the timber” 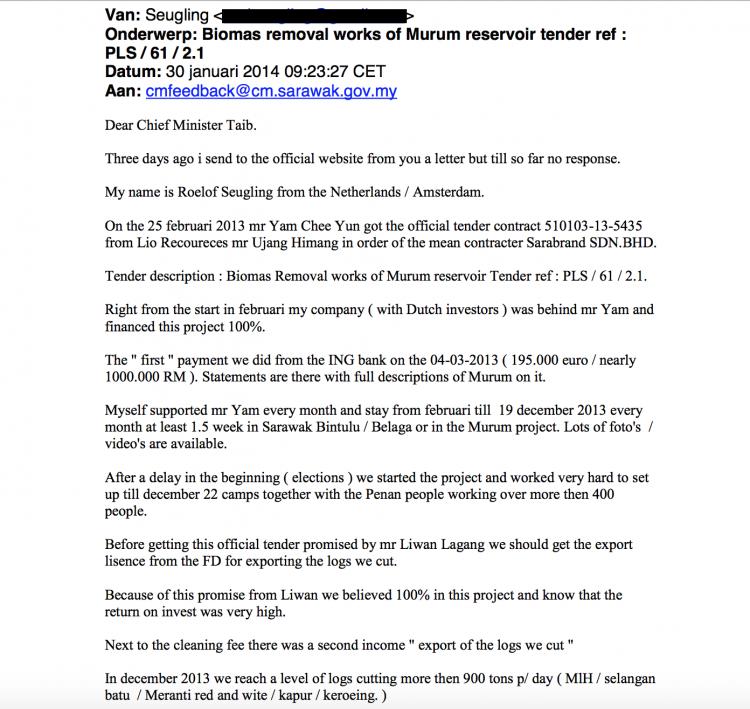 Following the election Mr Seugling says he made a full report on this matter to the MACC headquarters in KL, but so far he has received no response on the matter. He hopes the scandal of the Murum Dam timber grab will now receive the attention of KL anti-corruption officials that it deserves.