Sarawak is home to some of the world’s biggest timber companies, all of them family businesses and closely entwined with the ruling figure in the state, Governor Taib Mahmud.

Given the apparently unrewarding nature of their activities, according to the notoriously low profits and even losses so consistently recorded in official returns, one wonders why these companies bother to continue to ply their trade?

Sarawak’s people have been elbowed out of their lands, threatened with gangsters if they dare protest and left with a monstrous eco-disaster to contend with.  Yet, in return they have received precisely nothing, since owing to the dreadful low profits declared there has been little to give back in taxes to the state.

Yet, despite this tragic ‘lose lose’ situation, these self same companies have doggedly continued over the past decades to rip out every tree they can lay their hands on in Sarawak, whilst  resolutely exporting their signature style of havoc and destruction into every other forested region on the planet.

And news this week reminds us, it is not just ‘third world’ areas that have proved vulnerable to the loss making extraction of the earth’s living resources by armies of Caterpillar bulldozers owned by these apparently hopeless Sarawakian business ventures.

Take Tasmania, a country of supposedly advanced governance, where the authorities have outraged local environmentalists by investing millions of taxpayers’ dollars in order to subsidise logging by Taib’s family company Ta Ann.  A relative handful of local jobs have thereby been preserved in a sunset industry that is wiping out the island’s remaining unique forests at enormous cost to the public purse.

Neither Tasmanians nor Sarawakians nor Malaysians should hold their breath in hope that somehow all this wreakage will fund the promised ‘development’ that is always used to justify the logging in the first place. It never does.

Yet, despite their failure to turn a taxable income or produce progress, all these Sarawakian logging companies still keep somehow finding the resources to keep on acquiring concessions in just about any corner of the planet that still has standing trees.

Another ‘advanced’ antipodean nation to have fallen for the plague is of course the 1MDB trust haven of New Zealand.  Just this week it has been reported that a company that originally pleaded innocent to careless practices and mass logging that caused a huge log jam after rains last year has now admitted guilt.

How many New Zealanders realised their remaining wild woods are being ripped out by low grade loggers using dirty and careless practices?  Are they receiving major tax benefits in return?

Sarawak Report understands that as in Tasmania the logging that caused last year’s eco-catastrophe, conducted by two companies, Hikurangi Forest Farms and Ernslaw One, has been criticised as unnecessary, secretive and sub-standard – phenomena folk over in Sarawak are only too familiar with.

When the rains came therefore, vast quantities of felled logs slid into the river causing appalling environmental damage, which is just the sort thing that goes on in Sarawak all the time.

So, perhaps it will come of little surprise to Sarawakians to discover that the ultimate owners of these NZ companies were none other than two more of the big six crony timber companies that dominate the state, Samling owned by the billionaire Yaw family and Rimbunan Hijau owned by another of Taib’s close business partners the Tiong family of Sibu (pillars of the local Methodist Church by all accounts).

According to the NZ investigative portal Pacific Scoop Tiong was:

“..granted 24 consents to buy sensitive land between 2005 and 2017, even though another of his companies has faced accusations of environmental and human rights abuses overseas since 2004.
The Tiong family has been investing in New Zealand for more than 20 years, with more than 90 approved consents to the companies controlled by the family, OIO’s Vanessa Horne said…..Both Samling and the Tiong family’s Rimbunan Hijau were yesterday named as irresponsible palm oil producers in a report published by Greenpeace.” [Pacific Scoop – 18th Sept 2018]

Veteran Sarawak watchers will perhaps be scratching their heads and wondering how the Tiong family set about getting all those sensitive licences over in the remoter areas of New Zealand and likewise how Samling managed to keep its right to log in the region despite having been fined twice for illegal practices.  Maybe Sarawakians who know these companies all too well can offer suggestions as to how these companies found their way around the normal hurdles and regulations?

Meanwhile, countries across the world should be wary of the Sarawakian logging menace that owes its protection to its special Godfather, the Governor of Sarawak. Read the news story below: 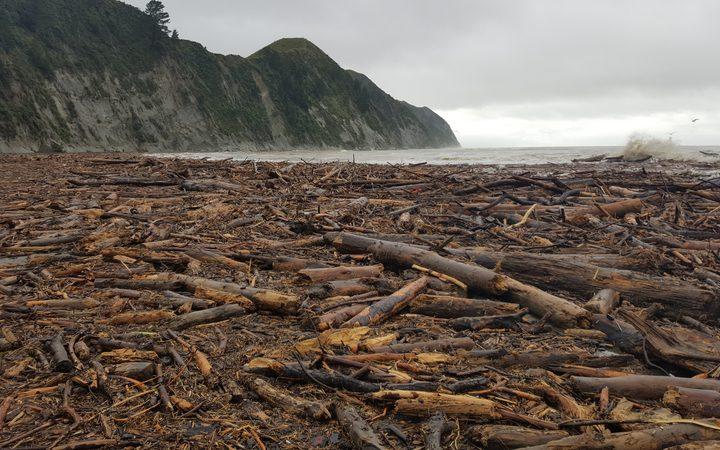 Gisborne District Council prosecuted 10 companies after after heavy rain washed piles of logs and debris on to roads and farmland during two storms in June 2018 causing millions of dollars in damage.

Hikurangi Forest Farms entered a not guilty plea in March to discharging contaminants into the environment in breach of its resource consent.

But at an Environment Court hearing in Auckland this morning it changed its plea to guilty.

Two further charges on land use restrictions have been withdrawn.

The company will be sentenced in Gisborne District Court on 1 October.

The remaining nine forestry companies will reappear in court in a few months time.