Alliance Of The White Rajahs?

Last week, Sarawak’s press outlets were full of dutiful coverage of a surprise public visit conducted by an elderly couple, who had so far never set foot in Sarawak – or so it was being reported.

In fact, Sarawak Report was informed by more than one source that Roberta Simpson, an 82 year old grand daughter of the last ‘White Rajah’ Vyner Brooke, had arrived earlier on an informal visit together with her billionaire oil baron husband from Barbados, Kyffin Simpson CBE the previous month.

Apparently, the couple had flown in quietly from Singapore by private jet courtesy of Governor Taib Mahmud’s second son, Rahman Sulaiman Taib, before returning to gush more publicly to the media a few weeks later as they conducted an official tour that included the usual sights and also a visit to Sibu and the Sanyan Tower, part-owned by Taib’s brother Tufail. * 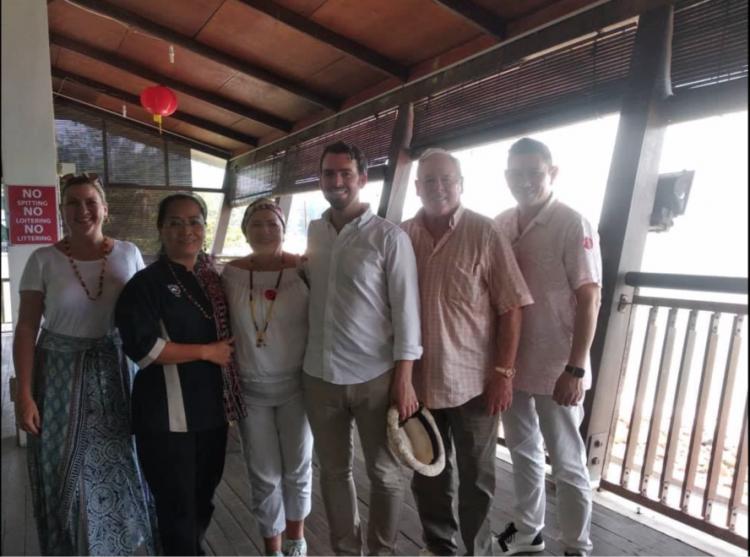 Sulaiman, who is rarely seen in Sarawak these days since crashing out of business and politics in 2010, was certainly prominent in accompanying the couple on that public tour. 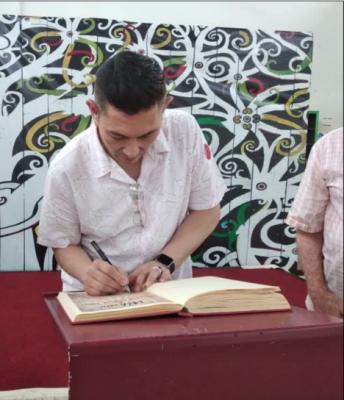 Usually absent – Rahman Sulaiman signs in at the Cultural Village

He was photographed with them at Sarawak Cultural Village and is understood to have brought the couple to meet his father the Governor (dubbed the White Haired Rajah due to his own four decades of autocratic rule).

One wonders what sparked this rare visit and rare initiative by the somewhat estranged young Taib and why Lady Roberta, who says she fears cobras, decided this late in life to satisfy her own curiosity about her ancestral connections?

Also playing a prominent role in this apparent courting of the Barbados billionaire businessman was the young Jason Brooke, a younger grandson of the disinherited heir to the former White Rajah dynasty, Anthony Brooke, now deceased.

Brooke has spent the past few years getting stuck into Sarawak since dumping a job at the British Museum and picking up a post as an advisor to a planned movie about Sarawak and his historic family, which the Sarawak State Government has seen fit to commission to the tune of RM46 million from a little known production company, which has ruminated over the project since 2013 but now indicates it finally plans to do something with the cash and promises to start filming soon. 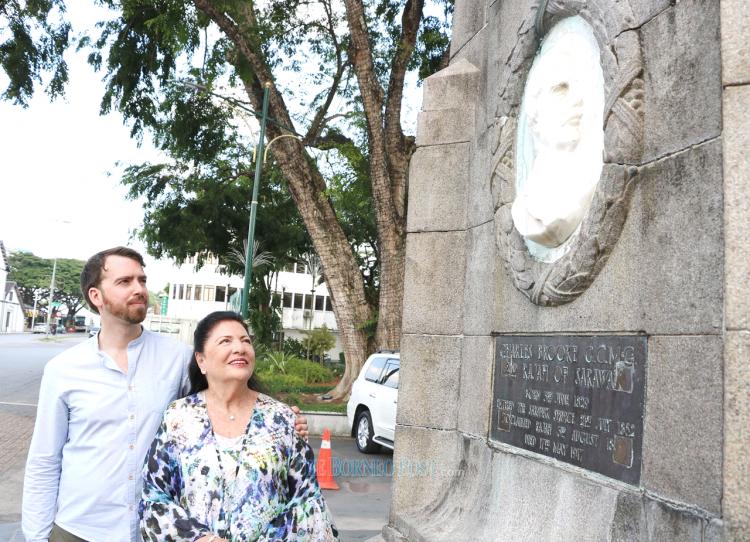 The 34 year old has also set up a Brooke Heritage Trust and joined the board of the Sarawak Association, after first visiting in 2008 and later 2013 to attend the memorial of his exiled grandfather, a nephew who would have succeeded as Rajah had Sylvia’s grandfather not decided to sell his kingdom to the British Government for £1 million instead. 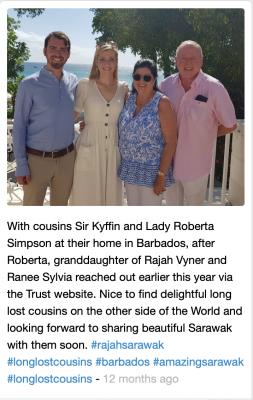 ‘Long Lost’ but now very much found. The Brooks who are sh.owing a revived interest in Sarawak

Relations are believed to have been estranged between the two sides of the family ever since.

Jason describes his second cousin Roberta in various Facebook postings as ‘long lost’, but he appears to have been making up for the sad rift in recent months.

The visit to Sarawak was preceded by a visit by himself and his wife to see the Kyffin Simpsons in their palatial residence in Barbados, according to Jason’s public postings.

Another Taib family member understood to have been actively involved in this circle of reconciliation and rapprochment between the descendants of the White Rajas and the present Governor is Taib’s Canada based daughter, Jamilah Taib, who has managed a considerable slice of the family fortune together with her Canadian husband Sean Murray through their Sakto group of companies.

Sir Kyffin Simpson, who is understood to have made his own original fortune out of a network of luxury car dealerships based in the off-shore tax haven of Barbados, subsequently moved into other enterprises, including oil. 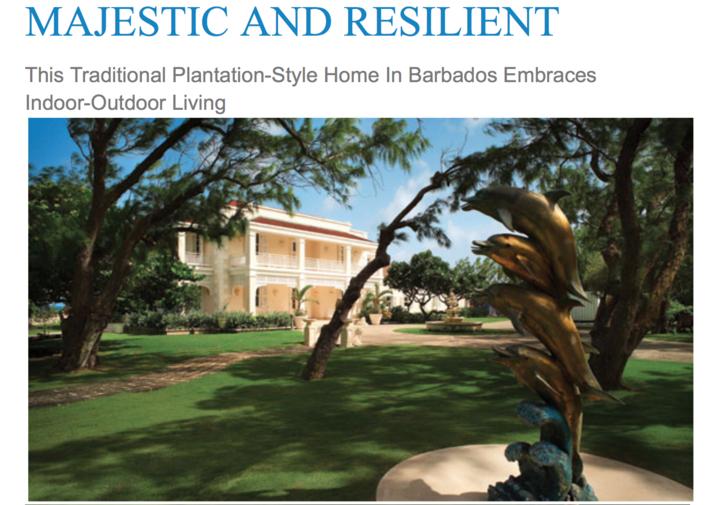 He reportedly sold off a 75% stake in his substantial private oil and gas group, Simpson Oil (the largest fuel marketer in the Caribbean) in October last year for a healthy C$1.5 billion to none other than a Canadian concern, Parkland Fuel Corporation.

Could the Canadian connection have possibly provided the link that brought all these couples together, since little goes on in Ottawa that the capital’s richest entrepreneur couple, the Murray Taibs, are not aware of? 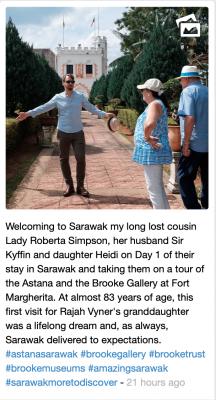 Welcome to where I am back working – Jason greets the Simpsons

Since the Barbados entrepreneur plainly has money to invest and plenty of nouse when it comes to the oil business, one wonders also if that might have played a part in his sudden new interest in distant Sarawak – or at least an interest amongst certain Sarawakians in getting to know Sir Kyffin?

However, if oil has indeed lubricated these new relations or formed part of the holiday discussions involving the extended Taib family interests and their visiting dignatories, Sarawak Report suggests a word of warning for the the Bajan billionaire and his eager young second cousin twice removed, which is that doing business with Taib Mahmud rarely adds lustre to any CV.

The Taibs have raped Sarawak’s timber and creamed billions from contracts and concessions corruptly acquired through the Governor’s notorious kleptocracy, which seems likely to finally catch up with the family sooner rather than later.

Just last year Sarawak Report also exposed how the Governor and his elder son Abu Bekir were caught in a naked attempt to move in on Sarawak’s petroleum reserves, setting up a joint venture between a company clearly connected to themselves, namely South Sea Energy, with Petros a state oil company set up by the state government ostensibly to replace Petronas as Sarawak’s main contractor. 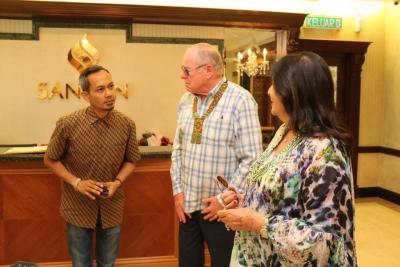 The plan crashed when former prime minister Najib, who had agreed to hand over operations to Petros in return for promised support at the gneral election, lost anyway in 2018.

The incomming PM Dr Mahathir cracked the whip and there has been little more public talk of Petros.

However, once the Taibs have their eye on an economic opportunity their track record rather speaks for itself. This family is clearly looking for ways to cash in on Sarawak’s oil fields, which are believed to be far more extensive than openly admitted to and have already attracted renewed interest in the state from the likes of Shell.

Those the Taibs may seek to do business with would do well to know that the climate is no longer conducive to the conduct of secretive deals in Sarawak that deprive the public purse and the national interest.  Happy holidays are another matter.

*Update: Jason Brooke has contacted Sarawak Report to assert that our sources were incorrect about earlier contacts between the Brookes and Rahman Sulaiman Taib. He has explained that the couple just happened to meet Sulaiman whilst in Singapore and he invited them to Sarawak to be the guest of his father the Governor. The party then flew over in Kyffin Simpson’s own private plane and not one of the Taib family fleet of aircraft.

By email he confirmed the couple had a meeting with Governor Taib on the Friday before they left.

Jason Brooke also complains he is not paid for his role as advisor to the film about the White Rajahs as suggested originally in the article, but has promoted the Margate House Films project with the Sarawak Government only to shine a light on Sarawak’s special history. He believes that the state government has paid 20% rather than the full the cost of the movie amounting he says to RM12 million, but that this should be confirmed. In 2016 he said in an interview that the film was fully funded and secure and had the backing of the state government ‘Ministry of Tourism, Arts and Culture and support from ‘local bodies and businessmen’.

Margate Films stated in 2017 that the film had been fully funded to the tune of its projected $15 costing and received the ‘green light':

White Rajah also has official backing from the Sarawak Government. During a signing ceremony in September 2016, Chief Minister Datuk Amar Abang Johari said: “White Rajah is an initiative by the State Government to promote Sarawak as a natural studio and a result of negotiations between the Brooke Heritage Trust, the film producers and the State Government through Sarawak Tourism Board.”
[The Star]

Jason Brooke says he has no knowledge of any connections between the Simpson family and Jamilah Taib and says our information is incorrect that Jamilah was connected to the trip. We have asked for comment from the Brookes as to whether they believe it was appropriate to visit Sarawak as the guests of Taib Mahmud, who is internationally notorious for his kleptocracy in the state? 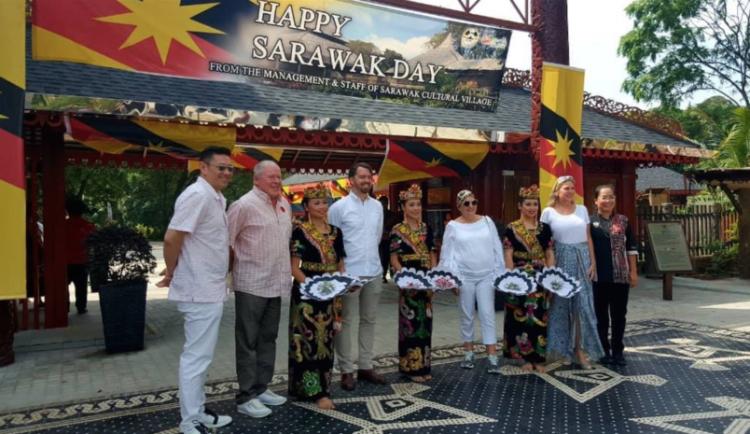