Sarawak Report has accessed a publicly gazetted request for the re-issue of a swathe of land title certificates in the Sibu area to none other than Governor Abdul Taib Mahmud, who has apparently claimed his original ownership documents have been lost.

The titles relate to no less than 68 separate lots totalling an astonishing 260 hectares of what is believed to be good quality land suitable for development in the outlying areas of Sibu.

Developers from Kuching are understood to have recently visited and expressed interest in the land, according to local professionals linked to the construction business. The same professionals have also calculated the land to be potentially worth at least RM150,000 per acre (RM370,000 per hectare) providing an assesment for the total value of these titles in the region of at least a hundred million ringgit.

Some of the land is on the Oya Road, which is highly accessible and near Sibu airport, making it extremely desirable property. 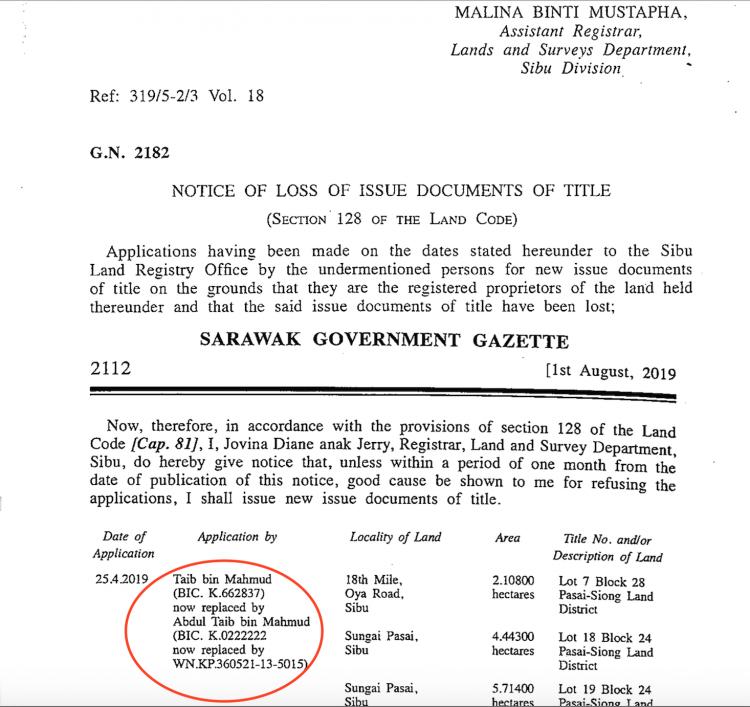 The notice in the latest August edition of the Sarawak Government Gazette details how Taib requested the re-issuing of the land titles back in April, because the originals had apparently become lost.

The lack of transparency over the issuing of provisional leases and land titles has been of long-running concern under the Taib regime, not least because of the mass misappropriation of native customary lands to favoured individuals without any notification being given.

Much of the land listed over to Taib in this notice is in the Pasai-Siong district, where his brother Ibrahim also obtained land before immediately selling it on for millions of ringgit in profits to the Tradewinds plantation company.

As Sarawak Report has earlier reported, the area was the subject of an NCR land dispute which the native Iban community lost because they did not find out to complain about the landgrab until after the time limit had expired for legal action – so the court ruled against them.

Although the purpose of gazetting the application (which is demanded under law) is to publicise the matter, in reality very few in Sarawak have access to this now prohibitively expensive government document. The Gazette is traditionally supposed to be placed in all libraries and accessible to the public, however when Sarawak Report researched the online public library service it found that no copies of the Gazette have been uploaded since 1993!

It is therefore highly likely there was an assumption that if this matter had been spotted by the limited readership it would not have been reported.

On a Chief Minister’s salary?

The matter raises questions that need to be answered as to how the former Chief Minister and present Governor obtained the resources to obtain such valuable tranches of land, registered here as being in his very own name?

During his decades in office the Governor of Sarawak, Abdul Taib Mahmud (born on 21st May 1936 as indicated by the gazetted ID number) never publicised any direct ownership of lands, concessions or company shares that he could never have afforded on his official salary. 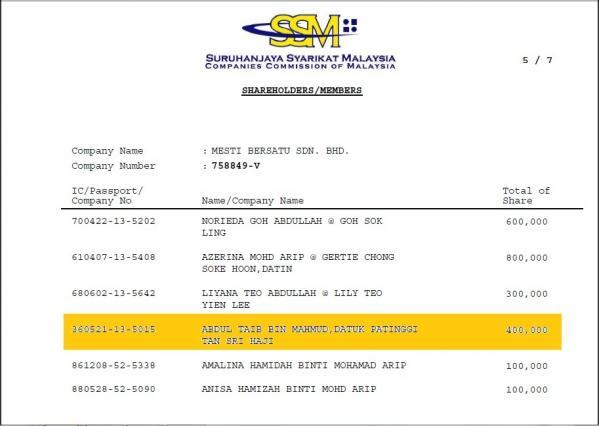 The same ID number for Taib was listed for the shares he holds in the family property company Mesti Bersatu, also exposed by Sarawak Report

Despite the fleets of Rolls Royce’s, the flash jewellery, lavish lifestyle and the haute couture touted by his wife he has always maintained there were no illegitimate sources of income and that he held no substantial personal assets. Little has been detected in his name.

On the other hand, his extensive family all have considerable assets and shares in Sarawak land and companies thanks to secretive handouts (as exposed by Sarawak Report) and through  ‘negotiated’ contracts.  When challenged, Taib has claimed that it was owing to their superior intellect that they have all become extremely wealthy and not through his patronage.

Moreover, in a filmed interview Taib further stated that he and his family ‘do not do business in Sarawak but outside’ in order to prevent accusations of conflicts of interest favoured treatment. In fact, the Taib family controls most of the business in the state although almost never publicly in the direct name of the Governor himself.

So, it is relevant to ask when these land titles were first granted to the Governor and who granted them and how much he paid? It is also relevant to ask whether these titles involved the alienation of native customary land and if so whether the local communities were indeed advised and warned that their land was being granted provisionally or otherwise?

Since the Governor is now seeking to obtain new documents of title it also would be of public interest to know if this is because his government intends to bestow development licences on the land, given the reports of Kuching developers having investigated the lots concerned?

If so, who has sanctioned such development plans and how have they been publicised so far?

The public of Sarawak are entitled to know exactly how much this land is worth, how and when it was obtained and whether any recent (or not so recent) government decisions have increased the value of the land? This is basic accountability which every public official, including the appointed Governor of the state, must be subject to and a duty to report.

Sarawakians are entitled to suspect there may very well be other, similarly unreported land titles that have come into the possession of this former, long-standing elected official and it is high time for a full and comprehensive investigation into all land titles handed out by the state along with the history of all contracts and concessions.

The secrecy and semi-secrecy needs to end.