Dayak landowners of Sarawak will take no pleasure but experience little surprise in hearing how the people of Papua New Guinea (PNG) have related their ill-treatment by the logging and oil palm plantation conglomerates based in East Malaysia.  These are companies who first robbed Sarawakians of their landrights before extending operations into virtually all the remaining timber reserves on the planet.

East Malaysia’s timber tycoons are a destructive force in the Congo, Amazon, Indonesia, The Solomon Islands, Tasmania, New Zealand, Siberia, PNG and beyond. Their practices rate amongst the worst in the world in terms of trashing the environment and the rights of indigenous people.

Now, as profits from the earlier palm oil boom have slumped, Sarawak Report has learned first-hand how these same Malaysian companies have been simply telling local workers in PNG that their jobs are finished and to find their way home, without compensation or support. All we spoke to were being paid illegally low salaries in the first place.

In one case Gilford Limited, a subsidiary of the multi-billion dollar company Rimbunan Hijau which continues to extract billions of dollars worth of valuable timber from PNG (without recording a single year of taxable profits over decades) axed an estimated 90% of its workers in part of a 50,000 hectare plantation in the West Pomio region just last month, without warning or any indication when they might offer future work. The ex-employees told Sarawak Report that their Malaysian managers simply informed these local people there was ‘no money left’ to run the company.

Sarawak Report toured and filmed the massive tropical timber island extensively last month.  The landscape has been decimated by Malaysian logging companies much like East Malaysia itself.

Alongside this latest abuse of sacking without notice, which follows the present downturn in the palm oil market, we recorded numerous instances of blatant exploitation, plunder and corrupt practice all conducted by the same handful of companies which first made their fortunes back home in East Malaysia under the protection of the Taib Mahmud regime.

Some of the most shocking examples of callous disregard for workers viewed by SR included forcing female workers to routinely spray dangerous pesticides that are banned in most countries, without even gloves, masks or protective clothing. We also found families of plantation workers living without access to basic services (water, sewerage or electricity), schools or medicines amid disgraceful living conditions in workers’ camps. 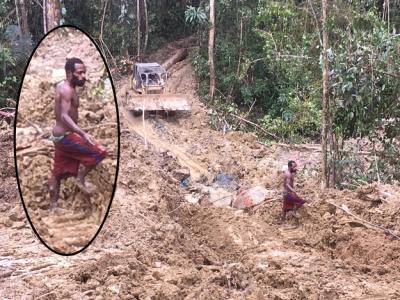 PNG workers slide barefoot in the mud around dangerous tools, whilst Malaysian managers drive in protected cabs in protective gear

Their Malaysian managers remained safe with protective clothing inside their cabins.

Tree fellers themselves explained they have asked numerous times for boots, protective garments and gloves whilst using chainsaws, but again these immensely wealthy Malaysian companies have denied the local workers (the actual owners of the land) such basic equipment, even though they are being employed to fell the valuable timber from their own property, corruptly sequestered by the Sarawak tycoons.

Companies like Rimbunan Hijau, Samling and WTK (along with newer West Malaysian players who are now investing in plantations) have destroyed millions of hectares of tropical rainforest on this the world’s second largest island (Borneo is the third largest) by ruthlessly undermining laws designed to protect native customary land rights and by currying favour with local legislators, as Sarawak Report was able to document in several instances.

Public commissions of enquiry have further exposed the shocking extent of scandal that has recently resulted in a change of government in Papua New Guinea.

“They are exterminating us”

A handful of Sarawak based Malaysian companies are responsible for nearly all logging of this nature in PNG and they have expanded the vast wealth obtained from that ruthless exploitation into a virtual capture of the economy of the country.

These timber, palm oil and petroleum conglomerates have employed their deep pockets, thanks to their earlier plunder of Sarawak, and have used the same tactics in targeting and corrupting key local decision makers to gain control of native territories.

Most ordinary Malaysians, of course, have little idea of what has been carried out in their name in PNG, but as we discovered their name is dirt as a result of these activities amongst most ordinary people in that country.

Numerous people told us they want the Malaysians to “go back home”. When Sarawak Report asked one community campaigner if the process should be described as ‘colonialism’ by Malaysians of PNG, he replied it was “far worse”. He said it is more a case of “extermination and genocide”, such is the strength of feeling amongst people now deprived of their homelands. Many Sarawak communities are in a mind to agree.

The sad state of PNG’s down-trodden capital Port Moresby, which is largely now controlled by the same East Malaysian companies, is a testimony to the false promises that lie behind the logging invasion that has been underway since the 1990s.

As Sarawakians are only too familiar with, these logging companies promise wealth, modernisation and ‘development’ to the communities they seek to exploit for their lucrative natural resources, but in fact they have merely plundered for themselves.

Port Moresby, like PNG’s other main towns, is poorly developed and ridden with potholes.  This despite the fact that the country’s ports are thick with ships exporting raw logs worth tens of millions per load.

A clue to how the plunder is being sanctioned is how so many local politicians have also ended up rich shareholders in the landgrabbing enterprises that have left ancient local tribal communities struggling to survive.

As with Sarawak, a ‘second stage of development’ in the form of mass agriculture – namely palm oil plantations – has been rolled out across many of the former logging concessions in PNG by subsidiaries of the same Sarawakian conglomerates, doubling the burden on native landowners (tied up in 99 year leases handed to the likes of Rimbunan Hijau).

The terms of the concessions are highly questionable in most cases, given that they have been carried out in the name of local tribespeople, most of whom never actually signed up to the proposals in their name (Sarawak folk know the process).

Talking to plantation workers we learnt that despite promises of prosperity (likewise made during the earlier logging) they have all been illegally under-waged and received none of the promised benefits which had included roads, infrastructure, schools, hospitals and basic development.

Conditions in camps we visited were dangerously unhygienic. Children are not provided for. Monthly wage slips we saw averaged between 300-400 Kina, which is equivalent in value to Ringgit. Yet prices are far higher in Papua New Guinea than Malaysia, particularly in the camp shops run by the companies themselves in distant plantations, and workers complained their pay runs out almost immediately, leaving them trapped from home. 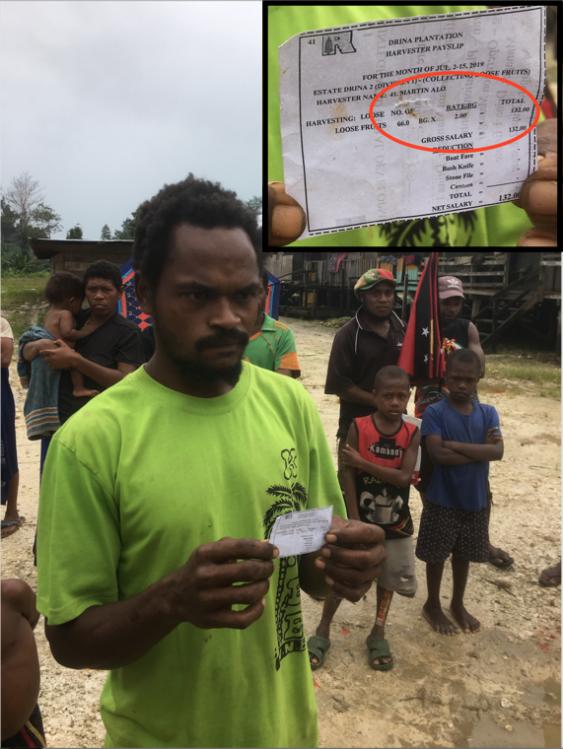 Last month workers at Gilford Limited were confronted by notices at the camp which listed the names of who were to be laid off. We understand that the number amounted to up to 90% of he workforce and the dismissals were instant and without compensation.

We asked one of the laid off workers if he was anxious over the loss of this job. His reply was that nothing could be worse than what he had endured for the past two years and so he felt liberated and plans to join campaigners in PNG who are challenging the role of the Sarawak based logging conglomerates in their country.

Sarawak Report will seek to enquire from Rimbunan Hijau and the Malaysian Oil Palm Board how many of its subsidiaries have laid off workers and what its response to accusations of illegal practices in the acquisition of licences (described in a law suit brought by the local Catholic Archbishop in Pomio as “unconscionable”), in the management of the environment and the treatment of workers in PNG might be?

Huge sums of money have been spent promoting Malaysian palm oil in recent months. Sarawak Report suggests that money would have been better spent on doing the right thing by such ordinary workers struggling in PNG rather than permitting this callous treatment by super-wealthy Sarawak companies who have made billions from their country. 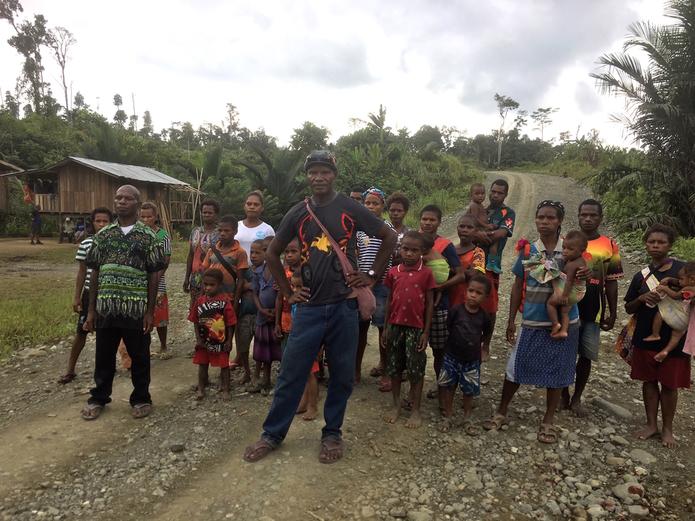 [Sarawak Report will be reporting in further detail soon on its research into the scandal of East Malaysia’s timber giants and their actions in PNG].