Between allegedly immersing himself in the major crisis that is Covid 19; reporting personally to the supportive Johor Sultan at his palace; playing golf and celebrating ‘victory’ with family and friends, ‘PM8′ (the Coup Coalition leader has yet to prove his legitimacy in numbers) somehow found time this week to send out a letter to ‘sack’ the Secretary General of his own party. 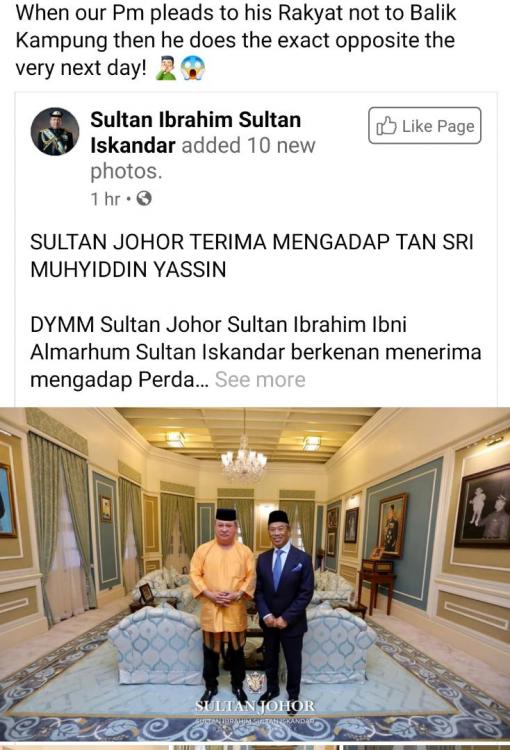 Not everyone has been impressed by ‘PM8”s attention to the crisis on his hands – including taking time out to travel to visit the Johor Sultan (who has been close to the action through this coup crisis) back at his palace, the day after imposing a lockdown on everybody else.

It is another sign that politicking and securing his, as yet still unconfirmed position as ‘PM8′, remains at the top of the ‘To Do List’ for this backdoor prime minister, even while his country tops the list of Covid 19 cases in South East Asia and 15 medical staff are now reported as having contracted the disease.

The reason ‘PM8′ wants the Secretary General of Bersatu sacked is clear. There is a drive to prevent the party’s April elections scheduled to confirm its official positions. Those elections could threaten Muhyiddin’s position in the party he claims to continue to be the leader of as the present President.

The Chairman is Dr Mahathir (PM7), whom ‘PM8′ plotted to usurp. No one has dared challenge his position, however in light of his defection the ex-PM’s son has declared he will challenge Muhyiddin for President and angry grass roots members may well decide to support that move.

That could leave ‘PM8′, who has already been exposed for misrepresenting his level of support within the party, not only as an unconfirmed prime minister but a leader without a party – possibly ejected from his party altogether. The situation would highlight the fact that new applicants to the party, namely the plotting ex-PKR defectors Azmin and Zuraida, are also not yet confirmed in the party although they claim to have joined.

‘PM8′ therefore needs to appoint a new compliant Secretary General to bend the rules in his favour and preferably ‘postpone’ the April reckoning with the members he betrayed – perhaps indefinitely. Without doubt the Covid 19 crisis, that his government has been so inattentive in handling, will be used as the prime excuse.

For now, as the Chairman of Bersatu has pointed out, the President cannot execute such a move without his consent. It is a battle that will doubtless consume plenty more working days that would be better spent on helping a bewildered Rakyat face a medical emergency during a time of totally unexpected and unnecessary political upheaval.

From the start of all this upheaval, while Azmin Ali set up camp in the Sheraton Hotel and organised mass gatherings of rebel MPs, Sarawak Report and others highlighted the folly of such politicking just as Covid 19 began its spread out of China.

Thanks to these plotters and deserters from Bersatu and PKR, Malaysia spent a full ten days without a government at all just as the world was waking up to the danger of the Coronavirus.

Prior to the Sheraton move, Malaysia boasted the rare advantage of both a PM and DPM who were qualified doctors fully attuned and aware of the dangers of infection. Yet by the time ‘PM8′ belatedly appointed his own administration, after some two weeks of decision-making hiatus, the country found itself led by a bloated cabinet liberally packed with extremist preachers, who know and care nothing for modern science.

During the two weeks hiatus, as many warned, the plotters mingled with each other and infected parties in large groups and gatherings and failed to pay any attention to the real pressing matter that faced the people. The priority was not their own positioning and politicking nor the racial issues they had complained of, but a desperate sickness spreading through the nation.

Indeed it still appears the plotters who put together this backdoor coup (a term certain senior royals apparently would like branded as ‘seditious’) have their minds so full of their plans for power, patronage and racial dominance that even now they have yet to comprehend that they managed to seize power in the middle of the worst global crisis since World War II. They are simply failing to pay sufficient attention to the issue.

The frame of mind of all these selfish careerists is perhaps best illustrated by the chief aide and organiser to the clueless Sarawak bumpkins who joined the coup from PKR. Vernon Kedit, a die hard Azmin loyalist who drove the Sarawak break-up, has seen fit to focus his social media efforts at this sombre time on a new profile shot of  himself together with the leader of this Muslim Malay supremacist coup coalition, plus smugly circulating the photos of his new office and grand (empty) desk achieved through this betrayal of his constituents. 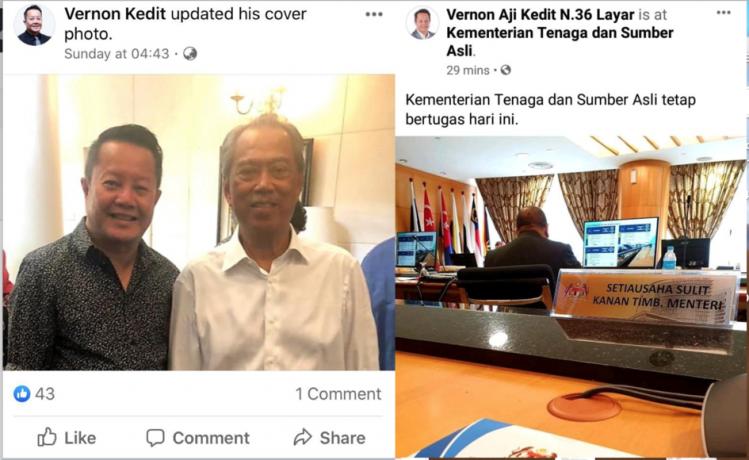 More important things to worry about than boasting about betrayal?

Meanwhile, back in Sarawak people are left wondering why they are now facing infection thanks to the madness that allowed a gathering to take place of 14,000 people together in a crowded mosque for three days just the past week, before attendees returned virus-ridden, to spread sickness throughout the land?

People are likewise wondering what sort of government makes a ‘decisive’ call to shut down universities full of student lodgers, who were then turfed out of their accommodation to crowd their way into the KL bus station where 45,000 people then mingled for hours to try to find buses that could take them home (along with any virus caught in town) to their country kampungs?

Alerted by public outrage the government then turned the closure order on its head – but they might have stopped to think things through, if not otherwise preoccupied with their power games and numbers building.

Likewise, as ‘PM8′ finally and belatedly ordered the closure of sporting and other events, it didn’t stop him playing golf with all his friends the very next day over the weekend or Zuraida from holding a grand party on Monday night to celebrate her ministerial reward for defecting in the coup, just as the government banned gatherings altogether.

So, it is clear to everyone who has paid attention that this ragtag coalition of essentially disunited political pygmies had given a barely a second’s thought as to the actual responsibilities of the power they craved before they upturned an elected government to achieve it.

They are yet to focus on what leadership actually means in terms of duty or on the horrifying present reality, which is that they seized this role on the very cusp of a massive crisis.  They are clearly not minded to have to deal with any such responsibilities when they still have positions to secure and parties to attend.

What about the economy?

In particular, as world markets implode, to what extent have these Sarawak bumpkins, Malay prelates and royalist hangers-on worked out the implications for Malaysia? The fact is that the level of economic crisis that threatens the country has just been made ten times worse by their own disruption.

The return of pillaging UMNO warlords into the government has not only resulted in a confirmation from the United States that no more 1MDB assets will be returned, it has terrified outside investors. The ringgit has free-fallen since the coup from RM4 to the dollar in January to nearly RM4.5 – at which point margin calls could wreak havoc causing the loss of jobs and wealth.

None of this seems to occupy the minds of the clowns who only see their ethnic domination of the government and control of contracts as being important.

Is Covid 19 really on the minds of PM8’s competing Cabinet?

The backdoor coup that turfed out a competent administration elected by the people claims it had the public interest at heart of course. But let’s examine whether the various players’ motives might have instead owed to individual self interests as follows:

–  In the case of Azmin Ali (who had fallen out with his previous PKR party leadership and craved to be the next PM): did he not respond to overtures from PAS, UMNO and the palace of Selangor because he imagined that ascending to a position of DPM (eventually PM) of the federal government would represent even bigger, grander opportunities for wealth and self-aggrandisement than he had enjoyed as CM of Selangor?

– In the case of his UMNO collaborators, Najib, Zahid, Hishamuddin and a string of ex-BN cronies and assorted pampered aristocrats: was not their key objective to get off the hook over their various criminal trials and get back into the driving seat to reset the klepto-clock to April 2018?

– In the case of the half-educated clerics, filled with bile from PAS: was not their aim to finally occupy a seat in government and exert their bigotry against everyone not part of their particular form of ideology, even though it involved an alliance with a bunch of crooks and liars?

– With regard to the frogs from Bersatu: was not their their main concern to restore ‘Malay Supremacy’, which meant a totally privileged and corrupted system that benefited themselves, despite promising a goal of ‘clean government’ and ‘rule of law’?

If the above reasons were the actual and conflicting preoccupations of the plotters who came together in the coup coalition, can it be any surprise that none of them appear to have paid more than passing attention to the real job in hand of protecting their country against a deadly virus that has rapidly moved out of control to top numbers in the region, thanks to their failure to pay attention to anything beyond plotting and protecting their political positions?

In fact, now the ‘PM8′ has sought fit to declare that the military will be drafted onto the streets to ‘enforce stern measures’ against those who ‘defy’ the up till now nonsense and conflicting directives of this government, he can hardly be surprised at the chill of public suspicion over the real reasons behind his moves.