Najib Threatens To Sue Sarawak Report 'When His Cases Are Settled'

Former prime minister, Najib Razak, has joined a defamation campaign against Sarawak Report, citing a libellous media attack in order to declare the editor a “liar“.

In this Facebook post he expresses confidence that his own multiple corruption charges will be “settled”, after which he plans to sue Sarawak Report over various articles it has written citing various corrupt practices.

This means that he is of the opinion that the “settlement” he expects in the Malaysian courts will include full exoneration over 1MDB, otherwise Najib would not be able to claim to have a reputation to protect. Notwithstanding, Sarawak Report stands by the articles it produced which are supported by credible witnesses and confirmed documentary evidence  (notably the articles Najib cites do not include those about 1MDB).

What better evidence, therefore, that this UMNO warlord believes he has cut an arrangement with the new ‘PM8′ and his backdoor government, which depends on UMNO support as the largest constituent party, that he will be let off the hook on all the charges over 1MDB and other matters before the courts? 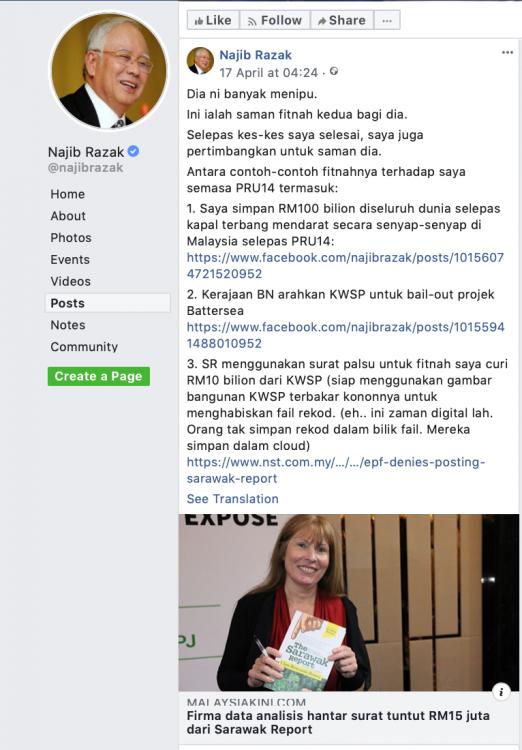 Najib’s Facebook attack on SR – “She lies a lot. This is the second case she’s being sued for. After all my cases are settled I am also contemplating suing her”

‘Prime Minister’ Muhyiddin campaigned and won his seat at the last election under the banner of opposing corruption and particularly the corruption and cover-ups by Najib Razak’s UMNO party over the thefts from 1MDB.

Having gone on to betray his party leader, prime minister and coalition allies in order to set up the PN backdoor administration with UMNO/PAS, he has continued to claim that he opposes all such corruption and that the likes of Najib will hold no influence over the government they are a crucial part of.

‘PM8′ seems to believe that if these powerful figures charged with gross theft are kept out of the cabinet and the trials are allowed to continue into a third year then he will have shown his coup is not about getting the crooks off the hook.

However, there are already concerns about pressure being placed on the judiciary to exonerate the two men on all charges, despite the fact that the country has witnessed months of overwhelming evidence. Why blatantly drop the trials when you can just put on a show?

Unfortunately, there exists weighty evidence to back up such concerns, including past political pressure placed by UMNO and Najib himself on the judiciary to influence the outcomes of trials.

After all, the present parliament’s majority party leader, Anwar Ibrahim, was himself unjustly found guilty of charges cooked up by Najib himself (the so-called Sodomy II trial) as verified by the Agong in 2018, who proclaimed Anwar innocent and abolished the charges brought against him.

And now we have Najib’s own cocksure comments to back up the conclusion that whilst ‘PM8′ may think he can conduct a coalition that is dependent on Najib, but still oversee a clean judicial process, these powerful political allies are publicly confident they can extract their price – and walk away from punishment.

After that, there will be other demands.

Najib has now made clear that he next plans to bring a slew of years libel claims against Sarawak Report relating to old articles prior to GE14, which for reasons he has yet to share he failed to bring when he was an all powerful prime minister at the time.

Clearly, these cases would have to be brought in KL, which is somewhere the editor of Sarawak Report is no longer safe to visit following the establishment of the backdoor administration containing figures who issued a slew of charges and and an Interpol alert during the last government. The UK statute of limitations for libel is just one year, so these cases are expired in the jurisdictions where they can be fairly heard.

As Sarawak Report will not be in a position to defend itself in court against cases that are out of date by many years, Najib clearly believes that the new balances of power in KL will enable him to start bringing a slew of actions and be sure of the courts finding in his favour.

A number of others, notably with past links to Najib and the previous administration, have also started to bring actions over years old matters against Sarawak Report (all expired for action in the UK) which for reasons they have failed to explain they did not pursue at the time of publication, as is normal for such complaints.

This is despite the fact that the ‘PM8′ government has just in the past week accepted US$300 million of returned assets stolen from 1MDB – assets which Najib has denied were ever stolen ever since the scandal was first exposed by Sarawak Report. The thefts were later confirmed in detail by the US Department of Justice law suits detailing the money trails from 1MDB and Najib’s involvement in them.

These folk may believe the purchase of ‘frog’ MPs is sufficient to return Malaysia to a corrupted madhouse, where the courts likewise jump to their demands. However, the outside world will continue to see the matter differently and it is in the outside world that Sarawak Report will be defending itself.

Malaysiakini has published a retraction of its original story featured by Najib.