Azmin's Gas Tank Is Showing Red On The Dial And Starting To Flicker.....

The constitution demands that a new prime minister, once nominated by the Agong, must seal his legitimacy by proving his majority in Parliament (the supreme ruling body of Malaysia in its capacity as the representative of the will of the people).

The constitution assumes that this would be an immediate process following nomination, but, just in case, it rules that there must be no gap of more than six months between sessions and that date comes up on May 18th. Having postponed this reckoning for as long as he constitutionally can ‘PM8′ called the sitting on the last day possible under the law.

Even so, he has used the excuse of Covid 19 to attempt to turn the event into a sham showcase rather than a genuine sitting.

Parliament is needed to legitimise the massive increases in the public budget and to legitimise the proposed ‘PM8′. All over the world parliaments have sat and debated such emergency packages during the Covid 19 crisis in order to give legitimacy to the further borrowing being authorised by governments to get countries through the pandemic.

Except Malaysia, where the increasingly panicked coup coalition have realised they still can’t make up their numbers and have been postponing parliament to avoid the danger of being voted out on their ears before they ever legally take up their ministerial positions and fancy self-awarded GLC jobs.

What this crucially means is that ‘PM8′ has failed to legitimise Malaysia’s increased borrowing plans, which means the country’s coffers are running out of juice to pay for all the expenses of Covid 19. And in parallel the desperado Azmin Ali, who hiked ‘PM8′ along with him into the front seat of his runaway political coup is starting to hear his own engine splutter.

The strategy for the May 18th showcase sitting had been to achieve the bogus legitimacy these chancers craved by producing the full shoulder-rubbing pomp and ceremony of a royal opening of Parliament, which could then be showcased on TV as if to confirm the position of ‘PM8′ before (they hoped) budget was raced through without debate and parliament could then be shut for another six months – as if that stuck to the constitutional rules, which it doesn’t. It was a blatant hoax intended to fool enough people for them to continue to pretend to be the government and dig into what money there was to share.

Naturally, the majority ‘opposition’ parties (that status is yet to be confirmed in the absence of a vote) have pushed back. Quite rightly, they have tabled a vote of No Confidence in ‘PM8′ and quite rightly the Speaker complied. With out much doubt any budget would have been treated with the same respect, had ‘PM8′ failed to rally a majority,  – i.e. it would be voted down until matters were arranged to the satisfaction of most MPs.

Once the Speaker made his ruling, the coup conspirators and their leader Azmin, realised they were staring calamity in the face. The plan wasn’t going to work now the temporarily divided opposition, earlier shocked by the treachery of Azmin and of ‘PM8′, had rallied their ranks.

The further unmasking of Muhyiddin’s duplicity with an audio released in the past few hours proving how he had pledged his loyalty to Mahathir at the Bersatu Supreme Council meeting only to within hours hitch himself to Azmin’s ‘Sheraton Move’ in return for the top job, has cemented the situation.

No one can any longer in doubt as to who betrayed who along with their voters.

Muhyiddin has likewise in the past couple of days been caught out attempting a secret  convening of Bersatu further back-stabbing exercise, by voting out his former boss and allies in their absence. Party rank and file have responded by demanding he and his fellow conspirator MPs should themselves be voted out of the party for betraying its stated principles and swapping sides without consulting the membership itself.

This same divided and treacherous crew are likewise resented by the bigger parties in the PN coalition, which they have demanded to lead as their reward for betraying their own side. That resentment is heightened by the hard reality that neither ‘Moo’ nor Azmin himself, the architect of all these moves, have actually succeeded in bringing with them enough promised MPs to make a majority, let alone win this No Confidence motion or get through a budget.

one source who has been in the thick of the carpet-bagging of the past few weeks has confided to Sarawak Report, and that is after weeks of attempting to bribe MPs over and seduce the rag tag of rivalling PN parties with jobs and bribes.

So, today a panic reaction, once again in the name of Covid 19, which would cause laughter if the situation were not so grave. The Puppet ‘PM8′ has issued an order that for ‘safety reasons’ only the opening ceremony can be held for this Parliamentary sitting demanded under the constitution – absolutely no actual business whatsoever in terms of votes or budgets. 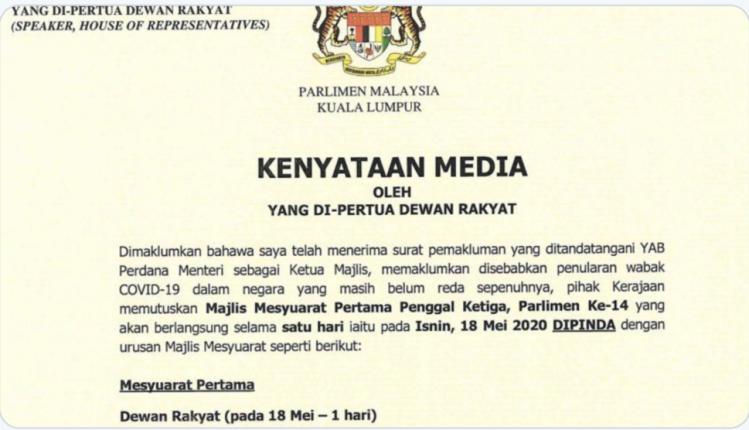 We can’t allow a vote because we would lose it!

This from a leader whose deputy Azmin Ali has spent the past week threatening states with legal action if they delay in sending people back to work immediately. People must get to work and MPs must come to Parliament, but the MPs must not work, says Azmin.

The Azmin/Muhyiddin credibility graph has taken a fatal blow from such blatant cowardliness today and for using such a pathetic worn excuse just as the rest of the country is being told to get to work.

However, as SR has earlier pointed out, this is a coalition led and supported by desperate fellows who are living from day to day following an ill-founded attempt to snatch power as a last resort to to attempt to bludgeon a way out of their own political difficulties and tussles with the law.

They may hang on to live another day at the wheel of the runaway truck that is the PN Government, by avoiding the issues and defying the constitution and refusing to let Parliament vote on an excuse the entire world can see as a nonsense last minute change of mind, after themselves relaxing the rules on Covid, to save their necks.

However, if they do survive Monday and start to claim their bogus opening ceremony has somehow ‘legitimised’ their government, no one knows better than the man in the driving seat of this runaway cab and his hapless passenger PM, that the dial has run dangerously low on that flickering fuel gauge and they are on borrowed time with the engine starting to splutter and slow.

They know that Malaysia’ finances are running out and borrowing is a problem when you have no cred. It is why they earlier tried to risk abiding by the law and voting through the budget, before they realised the opposition had re-grouped, and it is why Azmin is threatening people to risk their safety by going back to work (except MPs).

For Malaysia Inc to continue to be able to pay the bills it needs to be able to extend its deficit, which means persuading the finance folk to lend them money. This the ‘PM8′ government will not be able to do, whatever blandishments Azmin seeks to bring, if ‘PM8′ has proven himself too scaredy cat to call a legitimising vote.

Who lends to an illegitimate concern? What security will the world of international finance and analysis decide pertains to a country with an unstable transition government following a minority coup?

It hardly helps that the country’s greatest asset, the value of its oil, has just fallen through the floor or that senior members of the coup coalition are world famous financial criminals. Petronas’s ability to contribute to the government’s revenue has just roughly halved this year and any money there is in vulnerable to proven kleptocrats once more.

At some point, therefore (one suggests very soon) the fuel is simply going to run out on Azmin’s runaway truck. The money to bail out Malaysia will only become available when it can be legitimately lent and borrowed and that takes proof of a Parliamentary majority.

Azmin and Moo have simply failed to pull that one together. Others have it, not them.