Malaysians are currently being treated to a lesson in hardened criminal behaviour by their most powerful political leaders – people who like nothing more than to lecture ordinary folk on good morals. Currently, they are also ticking their opponents off for ‘criticising during a health crisis’ and ‘politicking when everyone has had enough’ (of their own politicking).

Calling the shots behind the scenes, former prime minister Najib Razak is presently challenging the courts to counter his laughable defence that tens of millions looted from the public SRC fund into his own account and then spent on holidays and luxuries was something he didn’t know about. He sent some of the money back and signed off on it, but still says he doesn’t know where he took it from.

For Najib it’s a high stakes gamble involving no less than joining with ambitious rebels to overturn an elected government, all thanks to a few hefty payments of stolen public money to strategic party traitors and a massive deal to surrender Petronas assets over to GPS. To hell with the national interest, this is his latest bid to get what he wants out of Malaysia’s court system, as he has done so many times before even in the matter of murder.

Next, according to the same playbook, he and his allies can claim ‘precedent’ on all the dozens of other charges for stealing even more billions that are still going through the courts and say they simply didn’t realise that they were enriching themselves and were merely innocent recipients of what they were led to understand were ‘donations’ by the manipulative Jho Low.

Najib’s allies within PN reckon that experience and cynicism have taught them he is right. Power brings wealth and wealth brings power to rise above the law. Meanwhile the majority of Malaysians, who generally live blameless lives, are being shown a lesson in bribery, hypocrisy and how to wreck the rule of law for everybody else.

To display his hubris and double standards all the more, even as he faces judgement over these most serious crimes against the state, Najib has put up his son for elected office and is demanding there be no competition against this first step towards cementing what he fully intends to be a dynasty.  Why? because of the threat of Covid 19, of course.

Yet at the very same time, as he has seen the backing slip for this fragile coup, Najib has started calling for a snap general election, which he plainly hopes he can do better in than the last. Health issues, what health issues?

This same Najib (whom Sarawak Report has just identified as having funnelled yet more of Malaysia’s stolen billions through Kuwait) has moreover come out trenchantly to claim that his PH opponents have been ‘buying’ up MPs, even though the whole country has been treated to three months of blatant hawking of emoluments by puppet ‘PM8′ and his chauffeur Azmin.

Running into the buffers

The problem with criminal activity is that whilst it can succeed spectacularly for a while, sooner or later it generally falls into disarray unless backed by overwhelming force which PN doesn’t have. The handouts have turned into a chaos of competing demands as the fractured PN rank and file have squabbled over their spoils and positions.

All last week Bersatu deserters like Redzuan Yusof treacherously moaned discontent over their new allies in PN. Press conferences were threatened and meetings held with PH leaders (whom they were elected to support) until, of course, the gratification was provided. A double traitor reverted to traitor only.

Likewise, another Sarawak MP has again snubbed his voters for a second time and flogged on his asset (namely the trust and support they laid in him) to PN. The game in every Malaysian household at the moment is to judge the price these ‘representatives of the people’ charged to desert their voters. Like a spouse who married you for your money, how much trust can PN have in such alliances?

At least the divide is now clear for all Malaysians. On the UMNO/PN side of the house of Malaysia’s parliament it is evident that the whole point of going into politics is to abuse the trust of those you seek to represent for your own financial and business interests and above all to sell your support to the highest bidder.

PAS is another PN party that right up until and after GE14 assured its voters they were an ‘opposition party’, when all along they were scheming with Najib and taking UMNO money. Having misled their constituents to gain their seats they are now openly joined to UMNO having cemented the alliance they kept secret from their voters.

Najib and his ilk cannot complain that Sarawak Report accuses them of buying their supporters. He has openly claimed just this week, without the slightest evidence, that this is exactly what his opponents have been doing and referred to “bought MPs”, thereby admitting to the practice. It is another established characteristic of the hardened criminal that they always accuse others of what they do themselves. 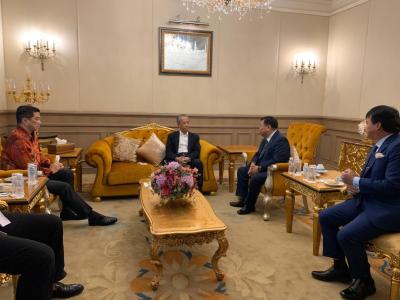 Another tough catch landed by Azmin for ‘PM8′, but what was the bait? Sarawak’s Jugah Muyang (Lubok Antu) came over to PN yesterday

So, if Malaysians have one positive to take away from this unseemly squabbling and continuing larceny of public funds, it is that the honourable like the dishonourable have been better identified amongst the ranks of MPs. Despite the desperate angling in all directions by PN as they have tried to build something resembling a majority, most of PH have remained intact and refused the blandishments they offered.

The ranks of PH have remained far more solid than the leaders of this ‘PM8′ coup expected.  Meanwhile, the squabbling in PN, as rows of MPs have shown themselves ready for treachery should they not get better rewarded, has exposed the fatal weakness of a coalition held together not out of principles, loyalty and an honest desire for public service but purely by cash or other bribes.

One disillusioned cabinet minister stood down last week, admitting he should not have betrayed the expectations of his constituents by moving to the opposite party they voted for. He reflects the dilemma and fatal weakness of a coalition with no option but to sink lower and lower to satisfy its more unprincipled MPs.

The truly devastating and serious consequences of this approach to governing a country has started to emerge with growing clarity as the shocking implosion at the country’s biggest earner, Petronas has started to leak out.

Last week, Sarawak Report was informed that amidst plunging revenues staff have been privately warned of a devastating 30% budget cut across the company. It follows PN’s promised transfer of assets to Sarawak, which is rumoured to have sparked today’s sudden departure of the company’s long-standing CEO.  After all, this represents the biggest bribe of all, which ‘PM8″ made to GPS in order to finally scrape together a pathetic 113 in the count for MPs.

Predictably, there has been no provision whatsoever for any of that promised Petronas loot to be ring-fenced for the ordinary folk who need it in Sarawak. Under the present agreement, should it be implemented, the state government will be able to channel all such revenues to where revenues went before, leaving both East and West Malaysians equally deprived of what has been the mainstay of the country’s economy for decades.

In return, Sarawak’s GPS leaders have now allied their Dayak parties to a Malay, Muslim supremacist coalition that excludes minorities from office. That is a high political price to pay in return for the cash received.

The consequences of having a man like Najib Razak in charge, ready to pay out whatever it takes to fulfil his ultimate agenda of Malaysia as a dynastic fiefdom controlled by him, became clear as the looting from 1MDB shocked the entire world.

Despite the GE14 rejection of those plans, this man and his gang of political marauders are back doing the same damage as before and someone needs to stop them.