Following Sarawak Report’s coverage of developments (or rather the lack of them) in Malaysia’s London court action against IPIC the Attorney General’s department has today clarified the situation further for Malaysians.

Answering an oral question in Parliament from DAP’s Tony Pua today the government spokesman (PAS law minister, Takiyuddin Hassan) acknowledged that the appeal by IPIC to the Supreme Court (to overturn an Appeal Court ruling favourable to Malaysia) is being held up by “various queries and interlocution requests that have been filed by both parties at the Supreme Court”.

What is Malaysia doing getting involved in such delaying tactics, one might ask, given it is in Malaysia’s interest to get this in an open court and put maximum pressure on Abu Dhabi to reach a generous settlement to avoid the shenanigans of their top fund officers and collusion with Najib being made public?

The answer is, of course, that there are plenty in PN (like Najib himself) who want the matter kept under wraps and Abu Dhabi bushes spared. They exercised their coup to stop the prosecutions over 1MDB and are keen to get a cheap settlement quickly and quietly.

In the same way Najib’s son Riza has avoided open trial and proper punishment and in the same way 17 Goldman Sachs bankers are likewise off the hook and Malaysia has lost billions in the process.

The parliamentary answer provided to Tony Pua also strengthened the various hints earlier given by the newly appointed AG that these settlement negotiations are advanced and that Sarawak Report had pre-empted what was doubtless planned to be another surprise announcement to be spun as a ‘victory’ for Malaysia:

“At present, the Malaysian Government is in the midst of cancelling this agreement [the ‘fraudulent’ Consent Order agreed by Najib in 2017] in the UK law courts in London. The proceedings are taking time as there are various queries and interlocution requests that have been filed by both parties at the Supreme Court.

Again it can been seen from his earlier press release that, as with the Riza settlement, this AG is attempting to pass on the buck to the previous PH government by suggesting these negotiations were already ‘underway’. 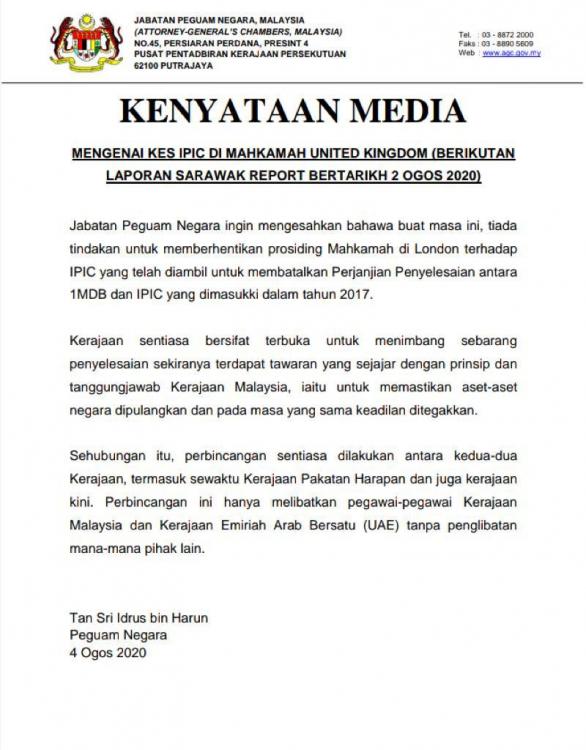 However, those close to the former AG have confirmed that no realistic offers of substance or proper negotiations had been achieved and that the strategy of the previous administration had been to put maximum pressure on the IPIC side by exposing their wrongdoings and collusion with Najib’s fraud in open court.

Alerted by these exposures the DAP MP Tony Pua has now issued a demand that an emergency Select Committee be set up to gain oversight of these secretive negotiations by the PN government, which have seen Malaysia short-changed by secret back door deals time and again since the back door coalition seized power.

All to save PN’s blushes?