Just Where Have Malaysia's Billion Dollar Vaccine Payments Ended Up?

In the animal fable we learn not to trust a scorpion because it is hardwired to sting us. Malaysians have every reason to feel the same way about the majority of practitioners of what is colloquially known as ‘money politics’ who are presently running the country (despite being voted out at the election).

Members of UMNO are disarmingly frank about the main reason why they go into politics since is it has long been regarded as the easiest and laziest way to make money in Malaysia.

The concepts of public service and upholding the sacred trust of the people have for years been limited to campaigners from the opposition, who were kept securely out of the picture thanks to the proceeds of plenty of easily available natural resources that could be scattered where necessary for as long as they lasted.

Meanwhile, the ruling politicians got down to the business of the gold rush around timber, oil, minerals, public contracts and the like, mainly through crony contracts, backhanders and blatant self serving of various forms.

The public are therefore rightly suspicious that even at this moment of national emergency, when the life and health of millions of people are at stake and depend on the honesty and efficiency of the leadership to prioritise the pandemic, opportunism and graft remain in the forefront of the minds of decision makers.

Think of the enormous sums of public money that need to be raised and spent on this pandemic after all. The reflex instinct, hardwired over decades of UMNO/BN rule for so many of Malaysia’s leading politicians, is sadly to dive into the potential for hijacking, plundering and ultimately undermining the purpose of all the cash.

After all, these backdoor coup mongers know they have a limited window of opportunity with their fragile hold on power. Many have only just started to taste the fruits of federal office and to pile up their private bank accounts.

The public can only observe how this coalition of rebels and party-hoppers have so conveniently and deliberately ridded themselves of all forms of accountability and come to an obvious conclusion about where a considerable chunk of the vaccine money may have disappeared.

The issuing of angry denials and hurling of counter-accusations, at the same time as avoiding scrutiny and refusing to provide proof, are telling signs that most adults recognise.

An avalanche of statements, claims and pledges do not match up to transparency and sober, consistent purpose either. Malaysians have been deluged with confusing and conflicting information and ever changing figures, their Parliament has been suspended and requests for detailed information on how much of the huge emergency budget has actually been spent on paying the cost of vaccines have been met with claims about commercial secrecy.

Who believes that ‘leakage’, as it is politely termed, has not been an issue?

So, in the absence of openness let’s look at the figures available. Despite promises dating back to last year about the mass procurement of vaccines at an enormous cost of some RM5 billion raised in emergency funds very little has yet to be rolled out. What vaccines that have been distributed have largely gone into the arms of Malaysia’s political elite and their various agents, of whom pretty much 100% are now protected.

In December the main politician put in charge of this programme, Khairy Jamaluddin, (who admittedly is one of the few PN ministers who appears to be capable of more than simply grabbing cash and making ridiculous remarks) promised a target of having 80% of the population vaccinated this year. As we approach July less than 5% of the wider population have been immunised.

The ‘direct procurement’ costs cited by Khairy at that time pitched that the purchase cost for this exercise would total RM2.05 billion as most folk will recall. Other sums have been bandied about and raised since amounting to the present tally of RM5 billion now said by the government to have been spent so far on its minimal impact vaccine rollout.

However, even the original sum has raised concerns. 80% of Malaysia’s population is some 25 million people, meaning that on average the procurement cost of these vaccines (which Khairy pledged were being obtained through direct procurement at factory price and not middlemen) amounts to RM78 per person or €16/$19.

Khairy also specified where these vaccines were being bought, although not the individual prices: 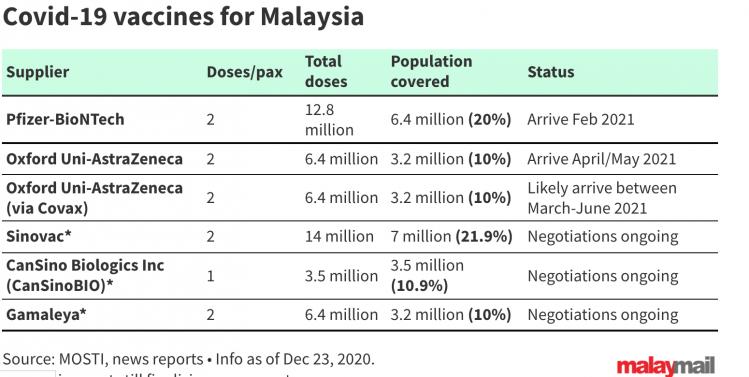 How the RM2.05 billion was announced as being distributed through various purchases of different brands

Thanks to information that has emerged despite much talk of non-disclosure, especially in Malaysia, it is possible to deduce where much of the money went. The Belgium health minister helpfully revealed, for example what the EU was paying per brand at around the same time that Khairy made his RM2.05 billion pledge:

From this Malaysians can deduce that for the 12.8 million vaccines they bought from Pfizer the cost ought to have been RM766.37 million

For the same number of far cheaper Astra Zeneca doses (provided at cost thanks to the British government subsidising its development) the cost ought to have been RM113,7million amounting to a total of RM880 million for 25.6 million vaccines (a little more than half of the total procurement designed to vaccinate 80% of Malaysia’s population).

This leaves one to conclude that the other less than half of the procurement of 23.9 million doses from two Chinese manufactured and one Russian (Gamileya/Sputnik) source absorbed the rest of the considerably greater cost of RM 1.170 billion. That would amount to an average cost of RM 48.9 [€9.79/US$ 11.87] each dose for the three brands.*

This would rate the value of the Chinese and Russian drugs near the top of the market, despite them not having completed their trials at the time of purchase or been yet certified and licensed either by Malaysia or the WHO. The only alternative conclusion is that Malaysia was paying well over the going rate for Pfizer and Astra Zeneca, which would plainly be a scandal for the manufacturers in their own countries and ought therefore be called out by Malaysia.

The pricing information available on the Russian and Chinese drugs indicates otherwise however. The Russians announced in November that they would market Sputnik for less than $10 (RM41/€8.25) whereas it has been indicated CanSinoBio will market Covax even more competitively at around $5. That would total expenditure for Malaysia of only $64 million (RM263m/€53m) for the Russian vaccine plus $17 (RM70m/€14m) for the CanSinoVio vaccine.

Sinovac’s Coronavac on the other hand has been the subject of various accusations of enormous pricing differences. This week one Philippines senator claimed that whilst a dose was being marketed in Thailand for just $5, the cost in Manila he complains is far higher.

Continuing with the calculations based on the available data and presumed pricing above it would appear that more than RM834 million would have remained in the kitty to cover the that final order in November time of 14 million Sinovac doses – this would pitch the price of Sinovac to Malaysia at roughly RM60 (US$14.6/ €12) which is a high price indeed by comparison.

In short, there is considerable room for ‘leakage’ in these figures, as all Malaysians can see, and since no oversight has been permitted from either the mothballed Public Accounts Committee or any other independent body the country is entitled to fear that this has been the case.

That was November. Since that time there have been waves of further expenditure announced for the purchase of vaccines that have barely been distributed. With almost the entire population already accounted for in terms of procurement by November the costs have now more than doubled to a proclaimed RM5 billion.

By April Khairy was out explaining why the original RM2.05 billion plus an allocated further RM1 billion for distribution was not enough – he was further inflating the Covid immunisation budget by RM2 billion to RM5 billion citing increased procurement costs and storage and administration costs. Over RM350 million was cited as being for ‘gifts to volunteers’,

Intriguingly, the minister has expanded the vaccines purchased from the 80% initially considered sufficient to ‘achieve herd immunity’ for the nation to 110%. The procurement  overkill is all the more galling given the deficiencies in delivery as the country wallows in extended lockdowns and continuing spikes despite the spending of such enormous sums.

Meanwhile, despite the claims there have been no middlemen involved, evidence is emerging of the role of intermediaries after all, most particularly with the politically connected Pharmaniaga which has been announced as the ‘sole distributor’ of Sinovac (at what would appear to be an uncompetitive price).

It is known that Pharmaniaga has already failed on the efficiency stakes having offered to take the role of re-packaging the doses which it was not properly equipped to do. There are unconfirmed reports that some 300,000 early doses were not only delayed but were spoilt completely owing to problems with unfinished production lines in Malaysia.

The cut for Pharmaniaga has not been disclosed for these dubious services. Meanwhile, private clinics and hospitals who have stepped forward to offer their expertise for free to help roll out the vaccination programme as a service to their country were for weeks rebuffed. What are Malaysians to make of that?

This week the Sarawak PKR MP Dr Michael Teo spoke out about his concerns that leakage was becoming as much the objective of Malaysia’s eye-wateringly expensive vaccination programme as immunising the population. Indeed, many have pointed out the strong element of conflict of interest involved altogether with a government that remains in power solely thanks to the emergency situation on the grounds of the pandemic.

With the population safely vaccinated the various arguments for the continuing suspension of Parliament and the cancelling of elections (already thin) would become non-existent. So, the slower matters progress and the more money raised and spent the longer the present PN government calculates it can stay in place.

That is what most Malaysians certainly suspect, given the history and given the evidence. Only transparency could change most minds.

*these figures have been slightly altered owing to currency issues.