The two Covid crackdown years following the overthrow of Malaysia’s elected government by the very corrupt forces that voters had removed from office have seen the disastrous return of many of the abuses of the BN regime.

Once again corruption, cronyism and kleptocracy are dominating the political mismanagement of the country whilst those who draw attention to such problems are being harassed and intimidated by the abuse of oppressive laws.

Bellweather developments for all to see include, once again, the harassment, arrest and prosecution of Malaysia’s political cartoonist Fahmi Reza, formerly a top target of the now convicted Najib Razak.

The satirist has now been ludicrously charged (under the oppressive Communications and Multimedia Act) with posting “offensive content with intention to annoy others” after mocking government double standards in tackling Covid 19. According to the international NGO, Article 19:

The graphic, which was posted on Fahmi’s social media accounts on 10 February 2021, calls out the Minister’s decision to shorten the COVID-19 quarantine period for Cabinet ministers returning from abroad on official visits; the graphic reads as follows: ‘Get a 70% discount from your quarantine duration if you travel overseas.’

For this wry observation in the public interest the Malay cartoonist is facing a possible RM50,000 fine and a year in prison.

However, it is not just thin skinned legal bullying of critics and campaigners that is characterising the return to abusive practices by Malaysia’s leaders, it is the fundamental violation of human rights in the form of people trafficking and abuse of migrant labour.

Malaysia’s lamentable record in the eyes of the world in this regard has again taken a turn for the worse thanks to the same political perpetrators who have forced their way back into office.

Last night it was left to a flagship UK News programme to highlight a scandalous situation in one factory in Malaysia where the British electrical goods manufacturer Dyson has now pulled its contracts owing to labour abuses.

It goes without saying that no Malaysian news show could have produced a similar expose without a host of ‘multimedia’ laws being invoked to drag producers into police cells to be faced with charges for ‘bring the country into disrepute’ or versions of.  For two short years things were different under the reforming PH government, which voters had elected, now matters are if anything worse as the hyenas scrap over the return of potential prizes.

According to the expose on Channel 4 News migrant workers from Nepal were denounced by their bosses to the Johor police following complaints about labour and working conditions at ATA Industrial (contractors for Dyson) and beaten up by the forces of law and order.

Following their torture the whistleblowers were forced to sign a false confession saying they had made up their complaints. How typical of the Malaysia everyone got to know under Najib and which has now returned with his colleagues back in office and him still at their side (waiting his moment, apparently, to seize back power).

Having originally suggested in June last year that the complaints of worker abuse at ATA were”false and defamatory”, says the Channel 4 report, Dyson later terminated its contract following its own audit:

In November last year, following the completion of Dyson’s independent audit carried out by Elevate, the company terminated its contract with ATA Industrial.
The report had identified major forced labour issues at ATA – including excessive working hours, the non repayment of recruitment fees and the employment of workers without valid visas.
Channel 4 News understands that Dyson’s investigation into Mr Limbu’s claims was one factor prompting their decision to terminate its relationship with ATA. [Ch4News]

The TV news report also claims Dyson later paid the costs of the Nepalese whistleblower’s journey home. However, Dyson’s lawyers have now complained to Sarawak Report that this claim is untrue. The company has denied (according to Ch4 News) that they failed to act when concerns were raised and says that the legal case reportedly planned against Dyson by workers at the factory “is groundless”.

Meanwhile, as everybody knows, cruel and abusive practices remain rampant against migrant workers in Malaysia, with effective human trafficking/indentured labour remaining as a mainstay of Malaysia’s industrial model.

This thanks to a government that prefers to turn a blind eye whilst decision makers appear to become unaccountably richer by the day. 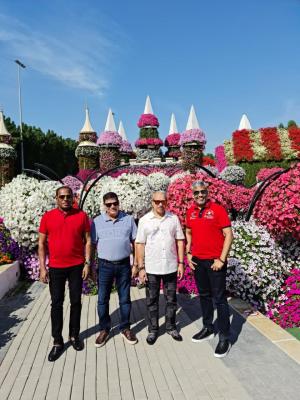 The optics can be lamentable as international criticism grows. Circulating widely on WhatsApp in recent days, for example, is an awkward picture captioned from Abu Dhabi in December 2021 showing the Minister for Human Resources, the MIC leader Saravanan Murugan (who has adopted a reforming stance) caught in an apparent holiday pose together with the president of the controversial foreign manpower supplier, Bestinet, and the CEO of the Human Resources Development Corporation (himself appointed by Saravanan)

The question asked is is it appropriate for a government minister to be hobnobbing in short sleeves in a foreign business capital with entities he is tasked with overseeing and if so could he explain why?

After all, Saravanan served previously in a BN government under UMNO president Zahid Hamidi who is now facing multiple kickback charges and faces open criticism in Nepal for alleged graft and exploitation related to the issuing of work permits whilst Home Minister.

Those criticisms were linked to Bestinet which was suspended by the previous PH government from operating its foreign workers management system and in which Zahid’s brother is a shareholder. Like with so much else under this coup regime there is a weary sense of deja vu to everything that is presently going on within Malaysia – a re-set to Corruption 2.0.

It is consequently of no surprise that international condemnation of Malaysia’s treatment of migrant workers has once more escalated, together with reprisals and enforcement measures from partner countries. Globally, international anti-slavery laws have started to bite but Malaysia’s BN 2.0 coup regime is carrying on as ever leaving the country’s record over the corrupt mistreatment of human beings (just another commodity in the world of graft) to shock the world.

Just this week the UK and US Ambassadors issued a sharp joint statement admonishing Malaysia on its record on workers’ rights and warning of the impact on the country’s economy from this abuse, which like most of Malaysia’s problems stems from corrupted governance.

The sanctions have escalated as the shameful record has increasingly come to light. In November Canada terminated its contract to source latex gloves from Malaysia owing to evidence of f worker mistreatment and in February it was the turn of the United States. There will be a growing flight from Malaysian manufacturing unless tough action is now taken the Ambassadors warned.

“Police and labour inspectors can identify those who exploit victims for forced labour, and root out any attendant corruption, without prejudice, to prosecute perpetrators and protect victims,” they advised in their letter, which ironically came just hours before the Channel 4 report detailing how in fact police have been employed in beating up whistleblowers to make them retract their allegations.

Human Resources Minister Saravanan has come back with a commitment to ‘work with’ its foreign trade partners to clean up Malaysia’s toxic image and enforce good practice. Perhaps he could begin by explaining what exactly he was up to last year in Dubai?

Update: the article has now clarified Dyson’s position following complaints by its lawyers who assert the company has behaved without fault.