Disturbing facts have started to emerge as campaigners against the planned destruction of much of the remaining area of Bukit Lagong Forest Reserve in Selangor today took their concerns to the Malaysian Anti-Corruption Commission.

After a moratorium had been passed on the relentless destruction of the region’s natural forests by the then new PKR state government in 2010, it was acknowledged in a statement at the end of last month that in the period 2018 and 2019 a total of 19 quarrying areas with an area of ​​800.50 hectares were approved in the Bukit Lagong Forest Reserve, on the grounds that they would provide materials for a new stadium and other projects in Selangor and the Klang Valley.

These concessions had not been publicised nor tendered, say protestors, who have found out about them only after logging destruction had begun. There are also complaints that the due consultation necessary with the local Orang Asli inhabitants of the area has not taken place, which is all in total contravention of the proclaimed values of the reforming, transparency and open tender platforms espoused by the PKR party in government.

Indeed, the view is that the handing out of no less than 19 ‘Small License’ concessions in such a manner, in several cases with more than one plot going to the same consortium, is a blatant attempt to get round the government’s own 25 Year Moratorium Policy preventing any logging activity in Forest Reserves from 2010 to 2035.

These covert little concessions have been parcelled out to an undisclosed slate of licencees without tender, without publicity or consultation and yet together they form a major block of Reserve Forest which is now assigned to destruction without notification.

Why such deviousness if the alleged objectives are so deserving (and insoluble in other ways) and why has it taken three years to acknowledge the process, only after being challenged by protestors? 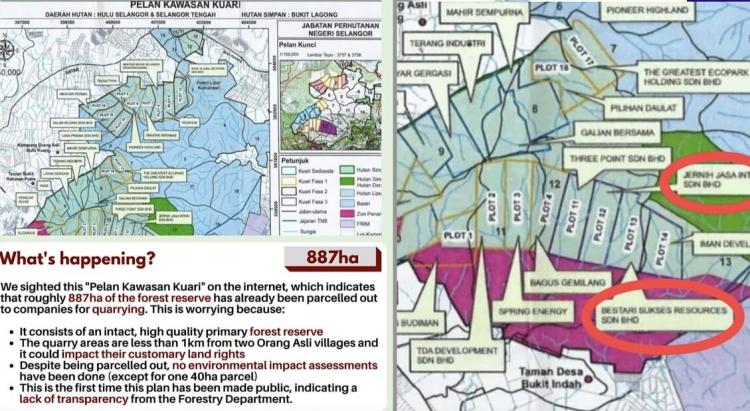 Lots of little plots side by side add up to a major project!

According to information, the individual who signed off on the original decision to licence these side by side quarries was the former chief minister of Selangor, Azmin Ali.

Azmin resigned the post following PH’s election win in June 2018 to be replaced by his deputy Amirudin Shari. Moving to become the deputy leader of PKR’s national party in the federal parliament Azmin was still considered to hold considerable influence over the management of the state

It is then well known that Azmin abandoned his party in February 2020 having failed to seize control and following a period of deteriorating relations that included allegations of misconduct and the emergence of indications of unexplained wealth.

He became a key component of the so-called Sheraton Coup that brought down his own government and installed a coalition of losing parties, where his dissident faction made up the numbers.

Amirudin remained with the PKR party and has continued to run the state amidst strained relations as he seeks to balance his continuing perceived alliances with his former boss with the views of many of his colleagues and much of the electorate, who now regard Azmin as a corrupted traitor to their party. It would appear that the plan for the secret ‘mini’ quarries has continued to evolve under Amirudin’s watch.

So, now the matter is in the open and the names of 24 companies who have received these concessions have emerged. Complainants have observed that no less than three of the companies are related to the Selangor State Government itself, therefore coming directly under the chief minister’s purview, so he can hardly have not known about the plans.

More troubling still are the profiles of the other companies who have been secretly endowed with these lucrative mini licences to tear down virgin forest and dig up rock. They include a number of shell companies with paid-up capital as low as RM2.00, RM3.00, RM25.00 and RM100.00, raising valid questions as to what investment and experience they will bring in terms of logging and quarrying the land? 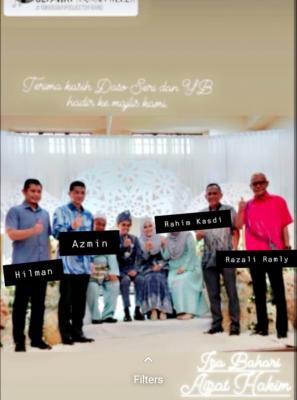 With vehicles such as these appearing as merely middlemen opportunists favoured by the state it is equally troubling that there are likewise several instances of the same individual directors gaining more than one ‘small plot’ side by side under different companies.

Then, there is the issue of the ‘politically connected’ director shareholders of a number of these companies as well, individuals whose knowledge and work experience relates to state politics and not to logging or quarrying at all but who have somehow emerged as partners in companies which have received concessions.

These are Razali bin Ramly (appointed January 2017) and Khairul Afiq Bin A Rahim (appointed November 2020) who both left their PKR posts in Gombak division to follow Azmin and Hilman into the Bersatu faction of the present ruling coalition in the federal government.

Ought not such apparent conflicts have been acknowledged and explained?

One question that deserves an answer is to what extent these two political figures put up the capital to buy their substantial portion of the shares of this particular RM300,000 company of which the long standing directors are Lim Teck Keng and Aminuddin Bin Ramli, are presented as lesser shareholders?

It can hardly escape notice that Mr Lim Teck Keng is also the shareholder and director of the company Three Points Sdn Bhd which was awarded the contiguous Plot 11 in the quarry map.

Three Points Sdn Bhd is no shell or paper company. It is a solid company with a strong business record, namely a Johor based sawmill and logging operator with markets in Europe and North America, meaning that it is without doubt always on the hunt for the raw materials it needs as the forests of Malaysia dramatically decline. 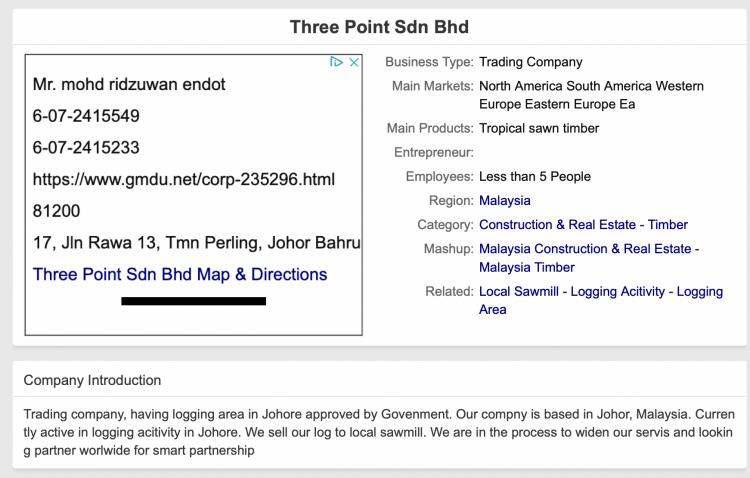 Logging and construction interest that has linked up with Azmin’s men?

Another company that appears linked to a larger entity with powerful political connections is Genius Force, the beneficiary of Plot 5. This RM100 company is itself 95% owned by Blueprint Projects Sdn Bhd, which is a quarrying and construction company of which the 70% owner is the son of the Sultan of Selangor, a family that has interests in other controversial logging of reserve forest in the state.

How and why were these particular individuals awarded such concessions without public scrutiny and tender?

Selangor’s delicate balance between the present leadership of PKR, now consigned to the federal opposition, and its relations with its former leader who abandoned the party under a cloud would appear likely to be sorely strained by such revelations.

Voters in Selangor deserve the fullest explanation on the project to destroy Bukit Lagong Forest Reserve. Sarawak Report is seeking contact for a response from the political parties concerned.