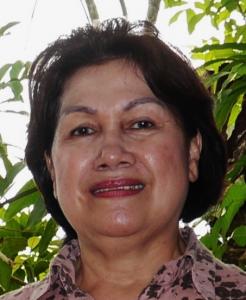 Theresa Ping Tingang photographed in Kuching where she was interviewed

Miri: There is a resounding response from the people of Baram to the comment by Penghulu Paul Kalang published in the Utusan Borneo in its Saturday 29th November issue. Besides those who are actually residing in Baram, the dissenting comments are from Baram people who are working in various places in Malaysia and elsewhere. In the article, the penghulu and his group claimed that the silent majority of the Baram people support the Baram dam. Responding to that, there are many comments from Barammites in the social media and phone calls to SAVE Rivers from those who are working in other parts of Malaysia who want their dissenting voices to be heard.

Met in Kuching, Theresa Ping Tingang, residing in the state capital and a close relative of Penghulu Paul said, “Paul is a penghulu who is well known for making contentious decision without proper consultation and courtesies. One example is my father’s share of the family land in Long San where we had a long dispute because Paul chopped off all our rubber trees on the land and asked his sibling to build a house on it while the court case was still on going. Before that he was also forbidden from using the land by our Ketua Kampung of Long San but he ignored all that. The house was built and ignored the court’s ruling where he lost the case and was fined. He has no respect for others, including elders, authority and even the court’s decision. He is greedy and self-centred.”

Dorothy Luhung Ding a retired medical officer from Baram commented on Penghulu Paul Kalang said, “Our leaders should do a good long-term understanding on the impact of mega dams on the people. They should not simply believe in all the empty promises made by promoters of the dams.”

Commenting on the statements made by the Baram politicians and community leaders, Peter Kallang, the chairman of SAVE Rivers said, “These lot, the politicians and the so called leaders have the audacity of criticising those who are against the proposed Baram dam. But they turndown invitation from the people for an open dialogue.” Mr. Peter Kallang was referring to a conference named, “The Baram People’s Conference” organised by the civil society in Long San recently. “I do not have any respect for leaders who refuse to meet their own people to discuss urgent and critical issues pertaining to their livelihood.” Mr. Kallang continued.