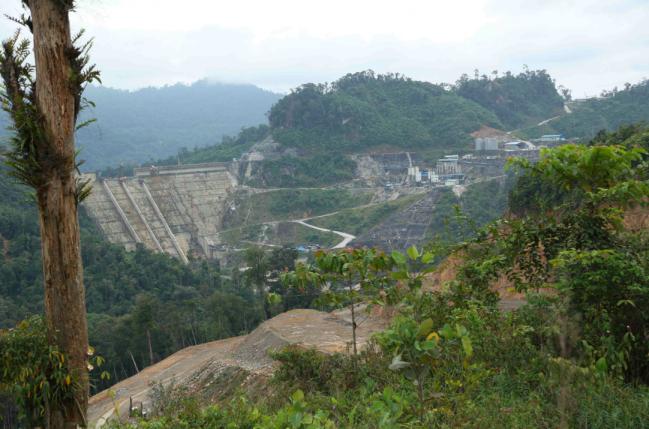 The Murum Dam has swallowed up 250 km2 of rainforest and forced 1400 indigenous inhabitants to resettle. Copyright: Linus Chung

(SARAWAK / MALAYSIA) Late last week, the whistleblower website Sarawak Report uncovered severe security issues at the controversial Murum Dam in Sarawak, Malaysia. A leaked assessment of the turbines of the dam concluded that the “turbine runners are not suitable for installation and operation”.

Norwegian consultancy company Norconsult was asked by Sarawak Energy to assess the turbine runners of the Murum Dam. A ‘runner’ turns the turbine as the blades of the turbine are pushed by the flowing water. The turbine runners at the Murum Dam have cracks and pores and the quality of the welding and grinding is judged as poor according to the assessment. As the defects are located in “high stress areas”, the “defects could likely be the starting point for fatigue cracks”. These cracks in turn could lead to small or catastrophic break downs. Flooding of the power-house and fires are described as possible worst case scenarios in the assessment.

Instead of communicating these security issues after the completion of the assessment in March, Sarawak Energy decided to perform highly unusual repair works at the already installed turbines to cover up the risks. Sarawak Energy’s dam building contractor Three Gorges Development Company is asked to do the repair at the site in order to keep the commissioning schedule on track to the expense of the workers’ safety. Professor Daniel Kammen from the Berkeley University had a look at Norconsult’s findings and Sarawak Energy’s intention to handle the problem at the dam: “I would be totally amazed if it was possible to do a proper alignment in situ. This looks clumsy, I have not seen this type of repair done in such a way before”.

Confronted with the leaked assessment of Norconsult, Sarawak Energy decided to downplay the current security risks at the Murum Dam. Sarawak Energy’s CEO Torstein Dale Sjotveit claimed: “The problems found on the turbine runner are rectifiable” and the Murum Dam “will be completely safe”. This wording clearly confirms that there are serious security issues at the moment.

These problems at the Murum Dam do not only shed a bad light on Sarawak Energy, but also on its engineer adviser Norconsult: In May this year, the anti-dam network SAVE Rivers from Sarawak visited Norconsult’s headquarters in Norway, but were kicked out. Norconsult’s CEO John Nyheim did not want to meet with the dam-affected representatives. He rather helps Sarawak Energy to cover up severe security issues at one of the dams.

4) to explain how the discovered problems will affect the long-term performance of the Murum Dam as well as their potential effects on the downstream Bakun Dam.

Read the full story on Sarawak Report and see the leaked assessment: https://sr-wp.london.goodcaesar.org/2014/07/murum-turbines-not-suitable-for-installation-and-operation-massive-seb-cover-up-over-danger-of-catastrophic-breakdowns-exclusive/