Conservationists call for swift action by Australian university and politicians to dissociate with Sarawak’s Taib Mahmud. 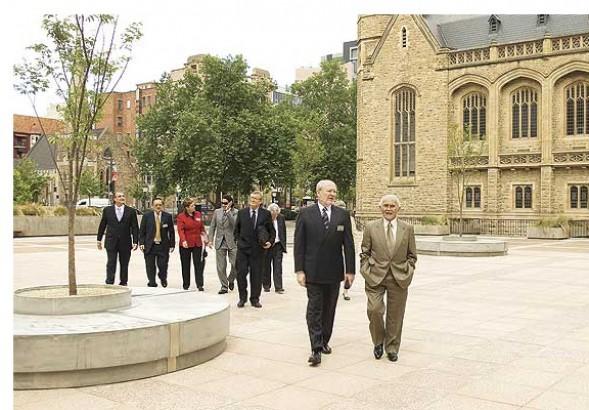 Five years after Sarawak Report first exposed Taib Mahmud’s questionable links with Adelaide University, the university’s Vice-Chancellor has recognised that there are problems with association with Sarawak’s ruling elite. Australian and International campaigners in solidarity with the indigenous people of Sarawak are calling for swift action from the University and Australian and Tasmanian Governments.

Switzerland-based advocacy group, Bruno Manser Fund had forwarded a copy of the book Money Logging: On the Trail of the Asian Timber Mafia by Lukas Straumann to Vice-Chancello Professor Bebbington and it was this that had prompted his response.

Professor Bebbington also revealed that the university had refused a request made by Taib to attend its 140th Anniversary Gala Dinner last year.

“Adelaide University needs to take real action and take Taib Mahmud’s name off the University’s court. Lukas Staumanns book ‘Money Logging’ has provided compelling evidence condemning Mahmud’s ruling elite and their corrupt behaviour. It is further proof that Mahmud is not an individual that an Australian university should associate with. Now to save further embarrassment from tainted association with Taib and endorsement of his appalling practices, drop Taib Court from the university grounds.”

“Since Adelaide University’s Vice Chancellor found Straumann’s book to cause ‘considerable alarm’, so too should the Australian politicians in Federal and the Tasmanian Parliament, who have provided public monies of $50M to one of the six baddest logging companies named in Straumann’s book, Ta Ann,” Jenny Weber said.

Clare Rewcastle, investigative journalist and founder of Sarawak Report, stated, “Sarawak Report are hugely encouraged that Adelaide University is now recognising the problems with this major donor and are prepared to take appropriate action.  We have worked hard to bring a serious wrong-doing to public attention and sometimes it takes time to get a response, but we believe that wheels are beginning to turn and other institutions in Australia ought to follow this example.

A priority must be the Tasmanian government, which has been prepared to do business with Taib connected companies for far too long, both in the Tasmanian logging industry and in the Sarawak energy industry. It is time to stop turning a blind eye to the corrupt and highly damaging environmental and human rights situation in Sarawak, before Tasmania is tarnished by association.”

Lizzie Taylor, campaigner for the students group Say No To Taib Court at Adelaide University said, “I am so pleased that the University is standing up and doing what is right. No learning institution should be funded in any way by the suffering of others and the destruction of the environment.”

Money Logging: On the Trail of the Asian Timber Mafia, is authored by historian and campaigner Lukas Straumann. Straumann is the executive director at the Bruno Manser Fund, a Switzerland-based advocacy group that champions the rights of Malaysia’s indigenous peoples.

“One of the book’s aims is to expose the environmental crimes committed by Abdul Taib Mahmud, the long-term chief minister and current governor of Sarawak, a Malaysian state of Borneo.

The book is a wake-up call to the international community to treat the Taib family as what they are: politically-connected criminals who have stolen vast assets from the people of Sarawak in a carefully-planned effort,” author Lukas Straumann said.

The book shows how Taib Mahmud managed to dominate politics in Sarawak for over three decades and how he abused his public office to exploit Sarawak’s natural resources and turn his family into billionaires. Sarawak, a Malaysian state in Borneo, has long been the world’s largest exporter of tropical timber but log production has fallen significantly in recent years.