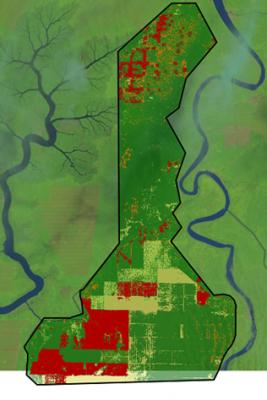 In June this year Malaysian palm oil company BLD Plantation Berhad announced its plans to clear 14,000 ha (hectares) of carbon-rich peatland in its Sarawak landbank in the next two years as reported by The Star. The company’s plan however has been criticized by Malaysian environmental group Friends of the Orangutans (FOTO). According to the NGO unless stopped BLD Plantation will cause serious environmental impact particularly on the climate, emitting around 37 million tons of CO2 into the atmosphere in the process.

According to FOTO director, Upreshpal Singh, BLD Plantations must immediately halt all clearing activities and adopt a strong policy to protect forests. “Palm oil development must not be at the cost of the environment, it can and must be planted sustainably. We urge BLD Plantations to stop clearing at once and announce a moratorium on any further development. A robust No Deforestation, No Peat, No Exploitation policy which also covers its suppliers and subsidiaries should also be adopted.”

The NGO is also asking the company to restore an area of forest and peatland it has already cleared and to resolve complaints by the local community.

Less than a week after the announcement US-based agricultural trader Bunge suspended indefinitely any new commercial activity with Kirana Palm Oil Refinery Sdn. Bhd. (Kirana), a wholly-owned subsidiary of BLD Plantations, after a formal complaint by American environmental group Forest Heroes. BLD Plantations is also a supplier to Kirana. In October 2014, Bunge announced a No Deforestation, No Peat, No Exploitation policy, which extends to the company’s subsidiaries and third party suppliers.

Singh added, “In one of BLD Plantations’ concession in Sibu rampant peatland clearing is ongoing and the company is now focusing on the northern part of the concession while the southern part is already cleared and planted. We’re talking very deep peat here and it must stop immediately”.