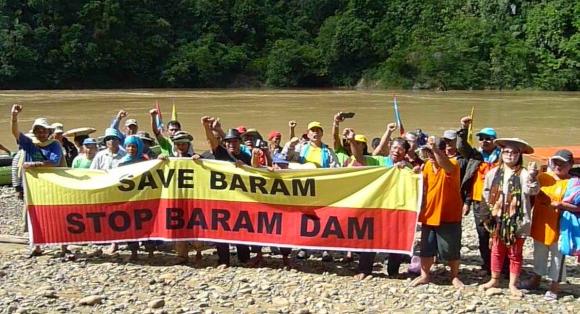 Miri – Save Rivers and Jaringan Orang Asal SeMalaysia (Indigenous Peoples’ Network of Malaysia) assert the rights of local people to oppose the proposed Baram Dam and to self-determined development. They urge Chief Minister Adenan to immediately withdraw his statement, granting Sarawak Energy Berhad permission to proceed with the Baram Dam, consult with affected landowners and other stakeholders, and take heed of academic studies showing that Sarawak’s future energy demands can be met by innovative technologies that do not have a destructive toll on forests, the climate and communities.

According to Thomas Jalong, President of the Jaringan Orang Asal SeMalaysia, “First and foremost, the residents of the affected longhouses have never given their free, prior and informed consent for the Baram Dam. If this project is built as proposed, it will go against the will of the affected landowners of Ulu Baram, all logical evidence of demand-side energy needs, and the law of the land –  our national constitution. It is a shameful attempt to intimidate people who have been standing strong to defend their rights to livelihood, maintaining road blockades for more than a year and a half. The Chief Minister’s recent speech in London about the preservation of forests is meaningless in the face of today’s statement. Now he is evidently willing to back the narrow interests of Sarawak Energy Berhad over the rights of thousands of people and at the expense of vast forested areas that serve as the very lungs of our land.”

As Peter Kallang, Chairperson of Save Rivers, explained, “We question who exactly are the leaders that CM Adenan has consulted and for whose interests do they really speak? Why did they have a ‘closed door’ meeting? No one can speak on behalf of others, especially without consultation. We invite the Chief Minister himself, to come to Baram, to the site of our blockades and hear directly from those affected. We will continue to protect our land, following the path of justice through the court system and calling for our rights under the constitution to be respected.”

Caroline Nyurang, co-chair of the Save Rivers Youth Committee, expressed her perspective by saying that: “We can see for ourselves Sarawak Energy’s track record at Murum Dam, where the displaced people have yet to receive their promised land allotments, have substandard housing, and face severe food insecurity. The youth of Baram want a brighter future for ourselves and upcoming generations.” She continued, “That is why we assert our rights to land and life together, across the generations. We, as residents of Baram, are taking a stand with our legitimate community leaders and remain steadfast in refusing to negotiate away our future.”