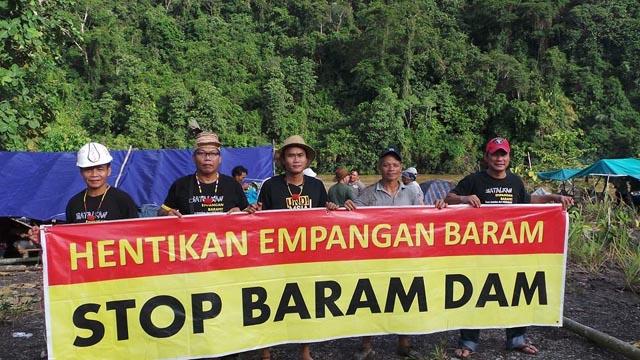 While the people of Baram welcome the announcement by Chief Minister Adenan Hj. Satem, that the proposed “Baram dam project is halted indefinitely”, the majority of them still demand a total stop of the project before they are convinced that the government is honestly listening to their plea.

A number of feedback-meetings had been organized for the villagers after the first announcement on the moratorium by the Chief Minister in Long Lama on the on 30th July this year. At all these gatherings, the general opinion is that the government needs to revoke the gazette for the land proposed for the Baram dam and its reservoir. The other request is for all loggings at those areas to be stopped immediately. Only after such actions are taken would the Baram folks accept it as a significant gesture. The resistance against the Baram HEP dam is indisputable. This is proven by their continuous protest actions including the blockades to the dam site and the construction of its access road.

Regarding the government’s constant promise of development and improved living standard which could be brought by the dam’s construction, the people are unconvinced. They have seen examples of broken promises by the government to those resettled by the Batang Ai, Bakun and Murum dams and some of them have also seen foreign resettlement areas. They know for a fact that forced resettlement is hardly ever fair and fulfilling for those affected.

Commenting on development, Mr. Peter Kallang of SAVE Rivers said, “Building infrastructures and ensuring public amenities is a government’s essential function. So those must be built with or without the Baram dam. If the government neglects this duty, it just proves they failed their basic role as a government. So dangling the development carrot to lure support for the Baram dam is mischievous and contemptuous. If the Sarawak government is able to bring a lot of development project to Bario, which is so remote in the highlands and further from any big town than any village in Baram, what is it that stops them from developing Baram? Must the Baram basin be flooded with water from the dam before the government figure out how to develop it?”