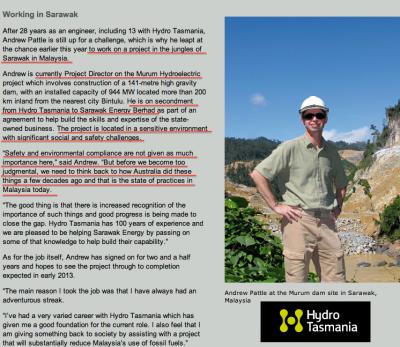 MIRI – The habitual refusal by Datuk Torstein Dale Sjotveit’s in accepting professional opinions and recommendations regarding the hydroelectric mega dams, is alarming. As a person who should be making vitally important decision in this critical matter, his attitude can mean a looming disaster to Sarawak and the people.

In a statement published by the Borneo Post on the 11 July 2015, under the headline “No time for nonsense”, SEB ignores university’s study on dam construction, dismisses it as “unfounded”. From this statement, it is clear that Datuk Dale Sjotveit’s obsession in building mega dams obscures reasons and farsightedness.  The study carried out by Prof Daniel Kammen and Dr Rebekah Shirley from the University of California, Berkeley on Sarawak was brushed aside by Torstein where he stated that that many of the findings in the study are invalid and dismissed the study as “nonsense” as such and SEB would not entertain the findings.

Based on the study by the two professionals from the University of California, Berkeley, the clearing and flooding of forest lands to prepare for the state’s three mega hydroelectric dams in Bakun, Murum and the proposed Baram had or could impacted on an estimated two-thirds of all tree and arthropod species in Borneo, which is one of the most bio diverse rainforest in the world. The list includes those on the International Union for Conservation of Nature (IUCN) Red List of critical and endangered species.  The study also concluded that besides being destructive, mega dams are expensive and not sustainable. It recommends alternative and sustainable source of energy.

Previously, Torstein also dismissed the professional opinion of Alexander Yan, former director of Mineral and Geoscience Department on the dangers of building mega-dams on fault lines.

The attitude shown by Datuk Dale Sjotveit just goes to prove the truth of what SEB’s former project director for the Murum Hydroelectric project, Andrew Pattle wrote. Mr. Pattle who was seconded to SEB from Hydro Tasmania,  wrote on Hydro Tasmania’s website and said that “Safety and environmental compliance are not given as much importance here, in Malaysia.”

Torstein is being very unprofessional when SEB itself has yet to release its own studies on their planned mega-dam projects in the state for public scrutiny and subject it to professional scientific criticisms from other parties.

We, in SAVE Rivers, in solidarity with all those who are victims of mega dams in Sarawak, , challenge SEB to come out publicly with all their studies and subject it to professional critique by other parties and let the public decide who is actually talking nonsense.

SEB’s rhetoric about engaging communities and getting opinions from other parties are mere hogwash as it is clear that Torstein is only interested to listen to his paymaster and bulldoze the state government’s megalomaniac plans to proceed with their dam building spree.
This is not the first time that Datuk Dale Sjotveit’s have dismissed professional opinions on mega-dams development in the state.

We wish to remind Datuk Dale Sjotveit’s that by flooding large forested areas and native customary lands is no laughing matter and should not be brushed aside as nonsense. We are dead serious in defending our customary lands and preserving the environment and to putting an end to this nonsensical dam building spree by SEB and the State Government.