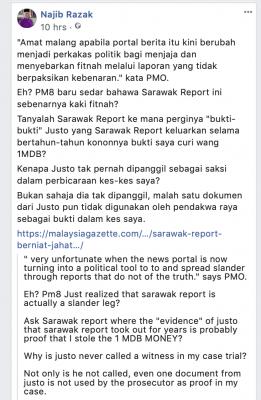 Thousands of comments condemning the messenger!

“Very unfortunate when the news portal is now turning into a political tool to spread slander through reports that do not tell the truth.” says PMO.

Ask Sarawak report where the “evidence” of Justo that Sarawak Report took out for years is probably proof that I stole the 1MDB MONEY?

Why is Justo never called a witness in my case trial?

Not only is he not called, even one document from Justo is not used by the prosecutor as proof in my case.

It appears that the self-exculpating Najib simply cannot resist going on about beastly Sarawak Report. We are his regular Facebook topic and perhaps we should be flattered.

If it were not for the ‘lies’ of this journalist, he tells gullible people who want to believe (and/or his paid cyber-army) none of the global investigative agencies would have frozen 1MDB money and a slew of his family assets and he would not be facing a list of charges and several court cases.

True, but on the other hand if Sarawak Report had been delivering “lies’, as he says, of course the rest would not have followed.

His favourite but utterly empty and ridiculous claim is that because Sarawak Report has not been called to give evidence at the trial, nor Xavier Justo, who obtained a copy of some 1MDB documents, it somehow means we lied.

So, to explain to those he is seeking to mislead, a journalist and even a whistleblower in a case like this is merely an indirect witness – we sounded the alarm.

Official investigators and prosecutors have now obtained the source evidence and have lined up the witnesses who were actually in the room along with the original documents, so who cares what we have to say or about our copies of those documents? Why waste court time like Najib’s defence?

Najib knows this, but he hopes impressionable people will think he is making sense. He cannot find answers for the facts before him, so he continues to deflect by blaming journalists and whistleblowers whose job in this matter was completed years ago.

While he delays and deflects he plots… to upturn an elected government to save his skin.