"Not Ready"? So Why Seek Power?

“The court has dismissed the case against the respondents, no leave granted.” [the Sabah AG] told reporters on Friday (Aug 21) morning.

Soh said that the court was careful in delivering its grounds that the first and second respondents [the Governor and Chief Minister] had acted within their constitutional powers and limits.

“There was nothing to suggest there was a breach in the state constitution and therefore the decision to grant a dissolution [of the state parliament], is not justiciable.”

“It was done properly in accordance to the law and the dissolution is therefore valid and constitutional, there should not be any uncertainty whether a state election should continue or not, ” he said, adding that the court decision should be respected by all.

Meanwhile, Tengku Fuad Ahmad, who represented the group of 33 assemblymen led by Musa, said the matter would be taken to the Court of Appeals…

“We are not ready for this. We have not given up. We will fight on, ”

So, what happened to all the brave words about wanting an election because the ‘people’ were ‘sick of PH’?

Musa and his gang have been hell bent the past months on bribing over YBs in order to grab power in Sabah and yet when they get their chance to win the actual people’s mandate they seem to panic and protest.

Why not embrace the opportunity? These folk are doing the same thing over their criminal charges, of course. They pretend to seek their chance to prove their innocence in court, but then do their best to get the charges dropped.

Speaking of Musa Aman: while he continues to fight the election through the courts his colleague Bung Moktar (also facing criminal corruption charges) who is put in charge of the election for PN has promised ‘fresh young faces‘ in the line up of well-known ageing crooks Sabah UMNO have on offer and dismissed the idea that the native people want the titles to their land that the Chief Minister has been handing out. 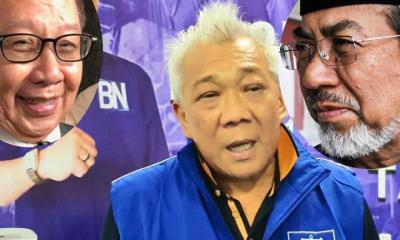