The police found no element of “vote-buying” in a food and cash handout event for the elderly people that is being aired in a viral video.

In a statement today, Malacca Criminal Investigation Department chief Azlan Abu said the event has nothing to do with the forthcoming Malacca state election.

“The image was uploaded yesterday by several Facebook accounts, showing food packages together with RM50 cash (being handed out to the elderly people).

“Image caption alleged that it happened in Malacca while some commented that there was a political element in the programme, which was meant to gain votes,” Azlan said.

“The investigation by Malacca police showed that the event was not meant to affect the ballots. No party symbol nor element was found in the video,” he said….

The two-minute-17-seconds video clip that made the rounds on social media shows dozens of elderly people queuing up for their share of food packages and an RM50 cash handout. 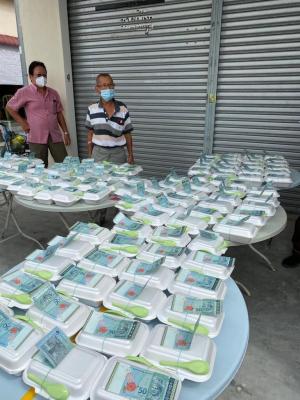 “I have checked with many activists and were told that this is an annual charity event in Pudu, in which food and cash are handed out on the road,” Leong was quoted as saying.

So, the Malacca police have investigated this shocking incident and have done little to explain what people can see with their own eyes. This is because their denials and assurances leave so much unsaid.

If the event had nothing to do with the Malacca election then where did the event take place and who is it that is handing out money to ‘elderly residents’? The speculation of a community voice in Malacca is inadequate on this matter.

If there is some regular charitable event where money is handed out to random folk on a regular basis then surely people would know about it?

What people do know about is the pernicious endemic practice of electoral bribery in Malaysia where money is handed out for votes before elections!

More to the point why are these ‘beneficiaries of charity’ plainly handing over their IC cards on receipt of their goodies? We can see what is going on with our own eyes in this video. This is of concern because of the practice of taking IC cards to prevent people voting or worse, to enable others to vote on their behalf.

Will the same folk have been told that after the election they will be able to collect back their IC card and another RM50?  If so, it will be a practice that everyone in Malaysia is aware of.

So, if this is not the case will the Malacca police now provide more details about where this  charitable incident took place, who was responsible for it and where their money came from so that Malaysians can find out more about what is going on with this highly peculiar set of circumstances?

It seems the forces of law in Malaysia would prefer distractions like issuing ‘Wanted’ posters for innocent foreign observers of the mess Malaysia now is in instead!