Muhyiddin: All gatherings postponed until April 30 or to be cancelled due to Covid-19: [Friday 13th March] 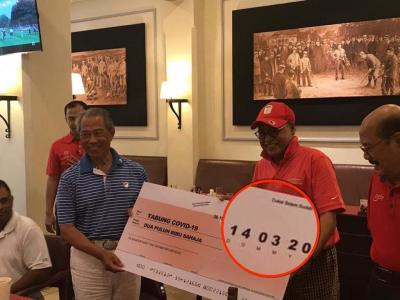 Golfing for Covid! The day after he banned sports?

All gatherings – including international meetings, sports, social and religious events – will be postponed until April 30 or cancelled, says Tan Sri Muhyiddin Yassin.

The Prime Minister, however, added that the decision will be revisited if the situation improves.

He added that he hoped that Islamic bodies in the states would come up with guidelines similar to the one issued by Zulkifli by taking into the advice and instructions from the relevant authorities, especially the Health Ministry.

“The religious events of other religions that are at a mass scale must also take into account advice and instructions from the Health Ministry from time to time,” said Muhyiddin in a special televised address to the nation on Friday (March 13) night.

Thus spoke Malaysia’s unconfirmed ‘PM8′ on Friday night (he must be kicking himself the Covid 19 panic did not quite arrive in time to excuse his legally dubious proroguing of parliament).

Yet, having banned everybody else, the very next Saturday morning he was out on the golf course – rubbing shoulders with a crowd of pals at least one of whom has been in contact with a known Coronavirus carrier. 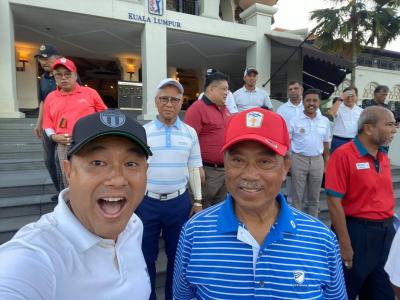 This was of course Malaysia’s top TPC golf course, which one assumes ought to have been shut (like golf courses all over the world have been) to normal folk?

Never mind, in a crowning irony the ‘PM8′ saw fit to recognise the crisis by displaying a not so whopping RM20k donation raised by the event to ‘help Malaysians suffering from the virus’. The cheque is dated 14th March, so we can all be sure ‘PM8′ was breaking his own sanctions.

So, clearly this ‘PM8′ has the crisis ‘well under control’ and equally clearly, Malaysia is back to one set of rules for ordinary people and no rules at all for those in charge – the good old ways that ‘PM8′ was so anxious to restore: 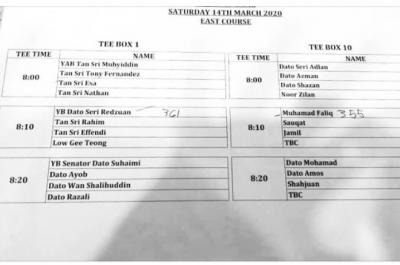 And just look whom he chose to play his banned game of golf with – none other than Air Asia boss, Tony Fernandez.

This ‘PM8′ has excused his backdoor coup on the basis that he will run a ‘clean government’, dependent though it is on the vital votes of some of the dirtiest politicians on the planet.

So, how appropriate that his golfing partner is none other than a longstanding UMNO crony who has just been caught out by a UK court for masterminding $50 million in backhanders on Airbus deals. Thanks to ‘PM8′ Malaysia has restored its old position in the world.

Mr Muhyiddin this weekend proclaimed that he has asked his predecessor for ‘forgiveness’ for his treachery – plotting that sadly was not deterred by his visit to the palace in Johor three weeks before the coup.

Malaysia is a democracy and it is from the people whom such characters should ask forgiveness – and they ought not to expect to receive it so easily.