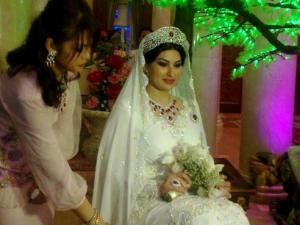 Did she marry for his money or his morals? All we know of the bride is she is around 29 and from Lebanon

We have an exclusive picture of Sarawak Chief Minister, Taib Mahmud’s, new young bride.  Kuching has been aflame with interest and amusement at the leaked information that the 74 year old has found himself a second wife who is apparently still in her 20s.

However, the government has refused to issue official confirmation of the wedding ceremony, which was celebrated at the weekend in the Chief Minister’s vast mansion (the financing of which remains a mystery, like the rest of his properties).  Even senior Government Ministers have been scouring the web for details of the new “Thief Lady”, who has yet even to be announced by name. In desperation calls were even going out to Sarawak Report.  We feel honoured to oblige.

Sarawak’s wealth around her neck

Sarawakians will not fail to notice that several thousand hectares of irreplaceable jungle must have been felled and turned to oil palm to adorn this lady’s neck. 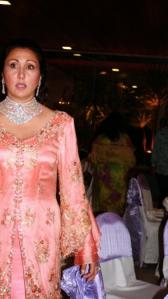 One top London jeweller today gave the opinion that the rubies in her diamond tiara, necklace, ring and broach are “likely to be fake glass”.  His reason was that if they were genuine cabochon rubies, like they appear to be, then they would be “priceless at such a size as that”.  When pressed the jeweller hazarded that they would be worth at least RM150 million.

Christmas is a time for sharing

As they depart for their Christmas honeymoon, doubtless utilising one of the Hornbill jets funded by Sarawak’s hard-pressed taxpayers, we hope the happy couple spare a thought for the many hungry children in the longhouses who are hoping for a nice present this year.

However, times are hard because more and more land has been snatched away from these communities by the Chief Minister’s BN government, so their parents will have already told them not to expect too much. 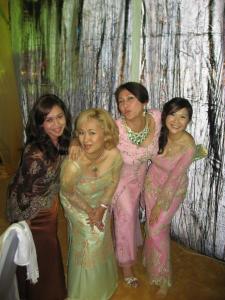 As ever, these parents will have to remind their children that the Chief Minister’s favourite advice to the rural folks is that they “must learn to wait”.  Apparently, Taib is promising that at some stage he will begin to share his wealth with the people he took it from! 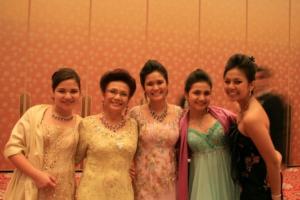