More Questions In Switzerland Turn Up The Heat On UBS AG Bank - And On Musa Aman! 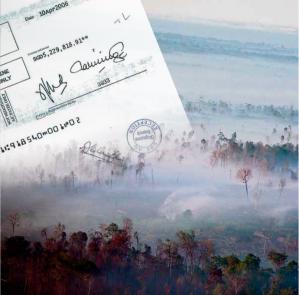 The question being asked in Switzerland is did these money orders, which were accepted by UBS, represent illegal profits from Sabah's forest destruction? Our answer is certainly yes.

The complaint in Switzerland against UBS AG, for banking timber kickbacks on behalf Sabah Chief Minister Musa Aman, has been transferred from the Zurich public prosecutor to the office of the Attorney General.

This raises the matter to a federal level, indicating the potential seriousness of the case.

It has prompted the country’s weekly business magazine “Handelszeitung” to reveal further details on the scandal, which is starting to prove highly embarrassing for Switzerland’s leading bank and extremely dangerous for Musa Aman.

Cashier orders worth millions of dollars

One of the key matters now raising eyebrows is the revelation that Michael Chia (Chia Tien Foh) used a series of cashier orders worth millions of dollars each to open his various bank accounts with the UBS branch in Singapore back in 2006.

Altogether, he deposited over $20million in mixed Singapore and US dollar cashier orders, all made out on the same day, April 10th 2006.  The orders, some of which were worth over $5 million, were all issued by HSBC in Singapore and then signed for and accepted by UBS AG’s new ‘Wealth Management Advisor’, Denis Chua, who supervised Chia’s new accounts. 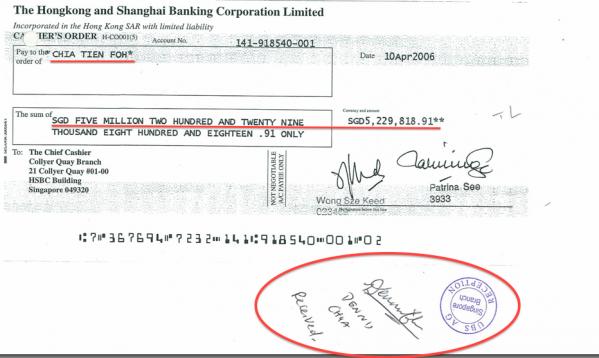 Accepted by UBS advisor Denis Chua - made out by HSBC

Experts have expressed astonishment to Handelszeitung writers that a major bank would have accepted these sorts of cash transfers in such a fashion, without questioning their origin.

“To accept cash cheques in such amounts is highly suspicious and calls for an explanation in every case.”

“If this is true, it’s an incredible story. Within UBS, the same standards should have been applied worldwide. In 2006, this should never have been possible.”

Meanwhile, Monika Roth, the professor of law who is prosecuting the case of behalf of the Bruno Manser Fund, is adamant that in doing so UBS:

“accepted a money-laundering risk, which is unacceptable and sheds a bad light both on HSBC and UBS as members of the Wolfsberg group”.

The reference to the bank HSBC opens a new line of enquiry in this matter that threatens to drag another major international bank into the heart of this scandal.

The series of Cashier’s Orders referred to by the Swiss publication were all signed off by the Chief Cashier of HSBC Singapore on 10th April 2006.

We have established that this was the day that Michael Chia closed down a series of accounts at the bank, some held in Singapore dollars and others in Australian and American dollars.

We hold copies of numerous bank statements relating to these accounts up until this date and those statements bear evidence of substantial payments from Sabah timber interests amounting to millions of dollars. They also show several payments being made from these accounts to Musa Aman’s sons, who were studying in Australia.

In fact, the activity in the HSBC accounts prior to 2006 is very similar to the activity that is then recorded in the UBS accounts opened after 2006.

Both sets of accounts received large sums of money from companies related to logging concerns in Sabah and paid out money to  Musa’s sons and transferred millions into further accounts that eventually led to Musa Aman himself.

The chart drawn up by Hong Kong investigators - layers of accounts leading from Michael Chia and his associates, to the lawyer Richard Barnes and eventually to Musa

Sarawak Report has established that the same Manager, Denis Chua, worked at both banks.  We understand that after Chua left HSBC for UBS AG in 2006, HSBC examined the Michael Chia accounts and subsequently requested that he remove them!

It was at this point we have been told that Chia received the cash orders, which he then brought to Chua, who signed and stamped their acceptance on behalf of UBS.

HSBC have so far stone-walled questions about their unconventional behaviour in this matter.  The bank merely told Handelszeitung:

“We cannot comment on cases relating to our customers and their accounts”.

However, they also claimed prevention of money-laundering was a key priority and that they have installed “comprehensive world wide risk management processes” for that reason.

This fails to answer why HSBC apparently closed down a suspect account, but nevertheless allowed the account holder to remove the millions of dollars concerned in a series of massive money orders, signed off on the same day for different amounts by their chief cashier.

One financial expert, speaking to Sarawak Report, has commented:

“This very unusual.  Normally, an account would be closed and the funds simply transferred to another regulated or accredited financial institution.  This method could be said to circumnavigate any traceability of these accounts or their closure and you have to ask why?  Issuing these cashier orders is the equivalent to simply giving cash.  Questions could certainly be raised with regards to issues of money-laundering” 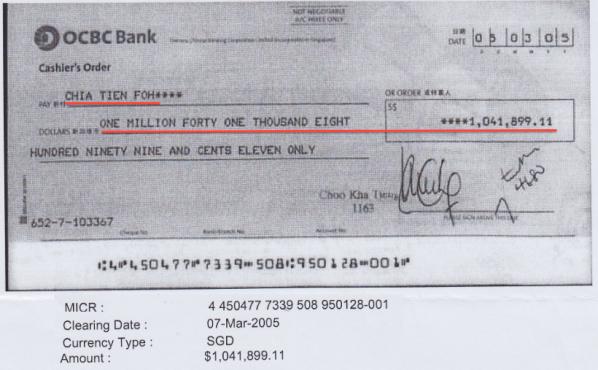 Exclusive! - A third bank, Oversea-Chinese Banking Corporation (OCBC), was also caught up in Michael Chia's money-web - this million dollar money order was one of several processed by the bank

UBS are also resorting to minimum comment in response to the growing questions about the conduct of their Singapore branch, managed out of Hong Kong by Denis Chua.

However, while insisting that they operate in all markets in line with the regulatory framework, Switzerland’s largest bank did concede to the magazine Handelszeitung:

“Should it turn out that employees have breached the law, UBS will sanction that and will clear the matter in cooperation with the authorities.”

If UBS do finally concede wrong-doing in their dealings with Michael Chia and his web of financial activities it will be time for them to offer full cooperation with the authorities with regard to what these bank accounts were up to.

Client confidentiality should not be allowed to operate as a crooks charter when it comes to the destruction of Sabah’s Borneo Rainforest. 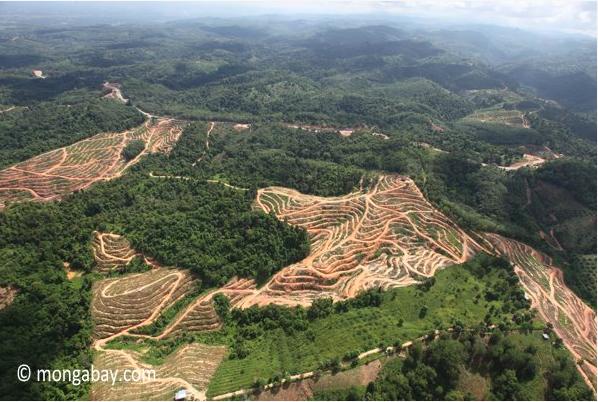