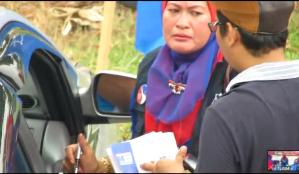 Election foul! – This hatchet faced BN organiser was filmed paying for votes at a car parked up by this polling station in Perak

We warned the vote buyers of BN that they were in danger of exposure this year like never before.

We said that an army of young Malaysians holding cameras, mobile phones and recorders as their weapons would be patrolling the streets ready to catch them in the act and post it on the Worldwide Web.

But, it seems they took no notice and carried out the instructions of their BN masters to try and cheat and buy up this election.

What greater crime can there be than to attempt to steal the liberty of your own people?  This crime is treachery.

Sarawak Report, like so many of the internet eyes on this election, has been watching and we present a round up of the cheating captured by the busy eyes of our team of supporters.  We will be updating it during the next hours. 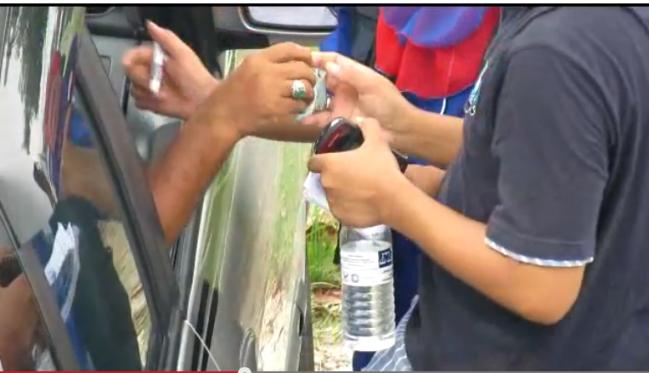 The woman at this polling station in Perak was then clearly filmed walking back to the BN polling centre with the bought ballot form to join her flag-waving party colleagues.

Handily, the camera was able to catch the number plate of the car she walked past as well… it was the car from which the money in the transaction was handed from. 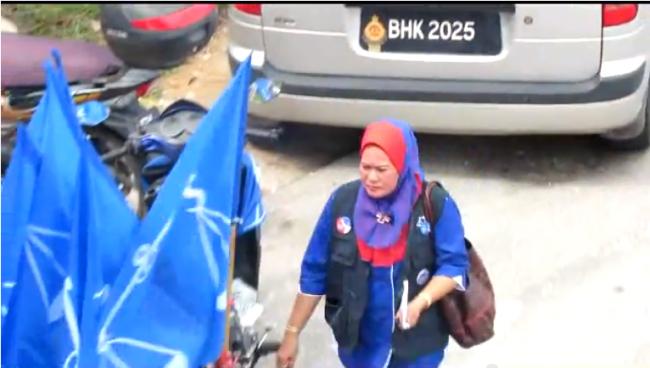 The car, the woman and the BN flags…. time to call the police?

There have been numerous incidents caught on camera of BN agents up to untoward activities in this election.  This is how they have always won in the past.  Take a look at our vote buyer as she returns to base. 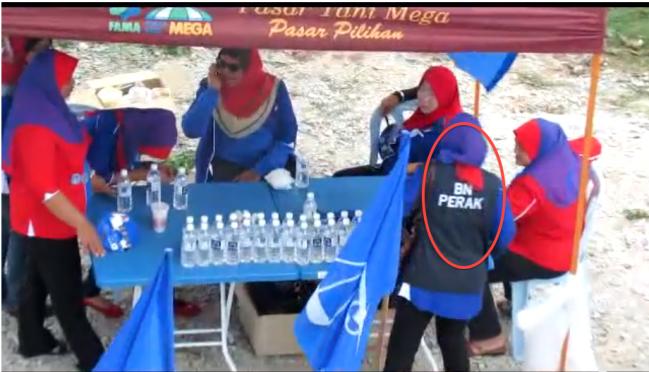 Back to her BN base…. the toad in her hole

Meanwhile, the citizen camera people were also picking up and posting evidence of other untoward activity in Perak, with helicopters dropping out bags marked for the Election Commission into the middle of a football field during the course of the day! 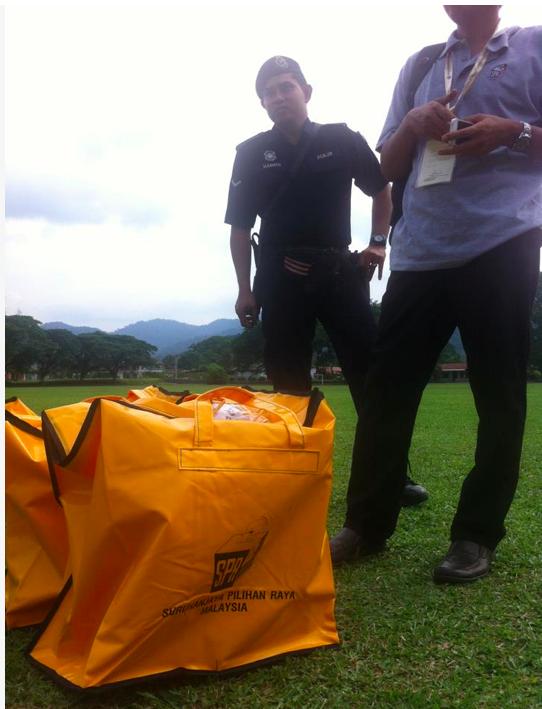 Marked for the election commission!

A horrified onlooker posted the shot on Facebook and said this:

‘”THIS is really going OVERBOARD…I hope we could get an EXPLANATION for this???  Time 3.50pm. Location Sungai siput (u), perak. Sungai buloh football field. A helicopter dropped 2 packages the SPR believed to contain ballot boxes in them. ANYBODY else saw this please CONFIRM here in CCWM Group on the thread…Thank You!”

Soon enough some relevant video footage arrived on the matter.  BN will try to front out this evidence when it comes out in court, hoping they can bludgeon through to yet another ‘victory’ and continue their gangster rule of Malaysia for another 5 years, helped no doubt by a ‘crack down’ on freedom of information about activities like this. 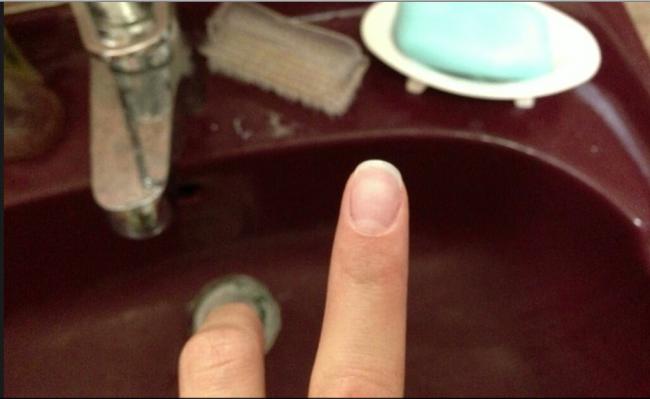 Washed off in a trice with soap and water!

As for indelible ink?  The whole of Malaysia is laughing about that one… and the excuse that has just come out, that the reason was it had to be ‘Halal’!  This on the basis it is ‘Hudud’ for BN not to be allowed to break the law to win? 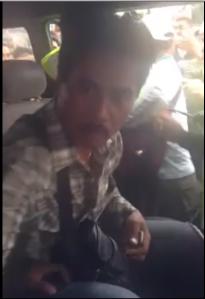 The voters many who can’t sing the national anthem or speak Malay have been filmed arriving at the stations…..

And then there were of course the imported voters. The buses duly drew up at polling stations around the country, protected by obliging police…. but filmed by outraged local people.

These matters will all be filed as reports, but what would a returning BN government, staffed with proven money grabbers do about it? 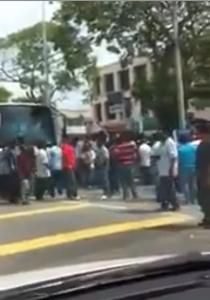 Then of course there was the foreign voter who made the mistake of presenting himself to PKR’s chief crook buster Rafizi Ramli, looking for money to pay for his vote!

The chap was questioned and could not sing the anthem or give a convincing account of why he had come from Sabah to vote in the Peninsular!

His suspicious IC is now up on the internet for all to see.  Maybe he was just trying it on.

With the culture of corruption engendered by BN’s vote buyers you can hardly blame the poorer classes from trying to get rice money out of a process that has been netting ministers billions.

But, they were being identified and caught on camera all over the place.  BN should hang its head in shame for exploiting the people they have kept poor in this way.  But, it seems these vote riggers have no shame, just a sense of entitlement that allows a bunch of 3rd generation under-achievers to think they should continue to run the country. 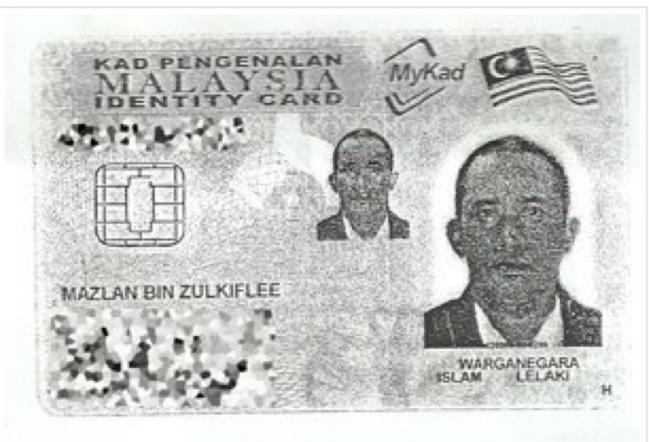 Can you pay me for my vote please? I came over from Sabah!

And of course over in Sarawak, Taib’s money bags (and those of his side-kick Sgn Chee Hwa of the spurious Sarawak Workers Party) started arriving at the longhouses at midnight last night.

Poor rural voters were shown by helicoptered big wigs “who was boss” with piles of money such as they had never imagined could exist.  RM500 to each of them.

If only those people could actually see the money piled up in the bank accounts of Taib Mahmud and his henchmen, then they would realise what a small amount they have received and how short a distance it will go towards repaying the vast natural resources they have thereby allowed Taib’s men to keep their hands on. 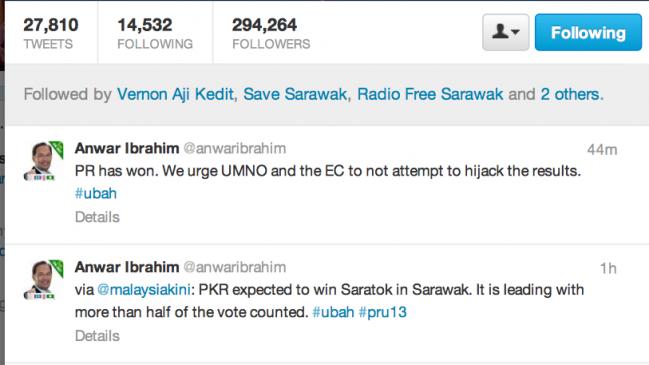 They are hijacking results….

And then of course, when BN really needed to force through a ‘victory’ they had to turn off the lights and shut down the comms!

Perhaps the most brazen attempted rigging at this election was the onslaught on Nurul Izzah’s Lembah Pantai seat.  Not only was the bribery rampant, but as the count was being finalised in her favour this evening the Election Commission officials came up with an extraordinary request.

They needed everyone to clear the count, so that they could take a ‘rest’!

The 15 PKR observers refused to accept the proposal and stayed on.  Shortly after a car drew up outside the count stuffed with ballot boxes inside!  The Election Commission officials attempted to force this late entry of extra mystery votes into the count! 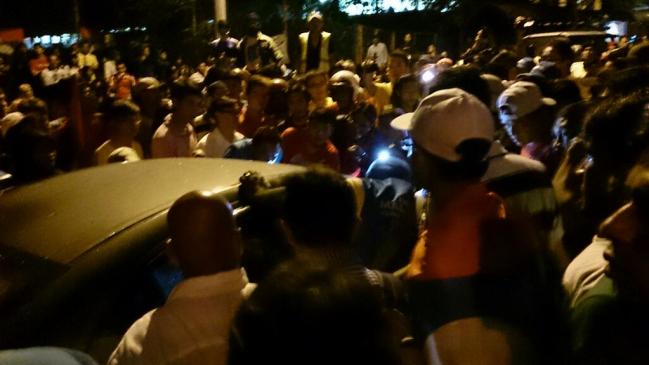 The car full of ballot boxes is stopped by the crowd

A human barricade prevented the ballot boxes from being illegally introduced at this late stage, which Federal Reserve Unit officers attempted to disperse.  The people refused to leave and the ballot boxes are still the in car and were not were not allowed into the count. 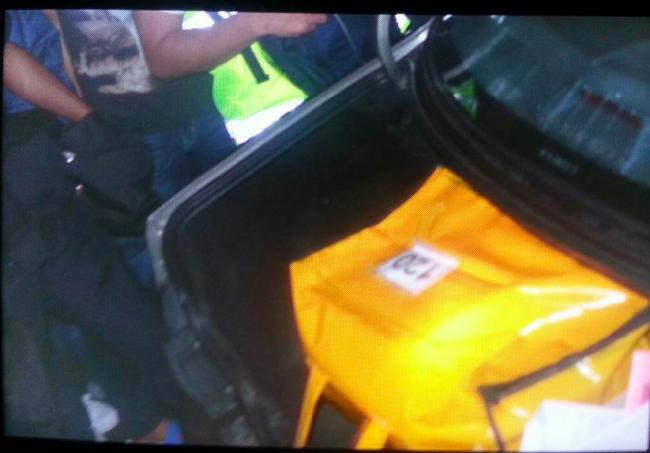 Nurul has been officially declared the winner thanks to the actions of the people who refused to allow their rights to be violated. 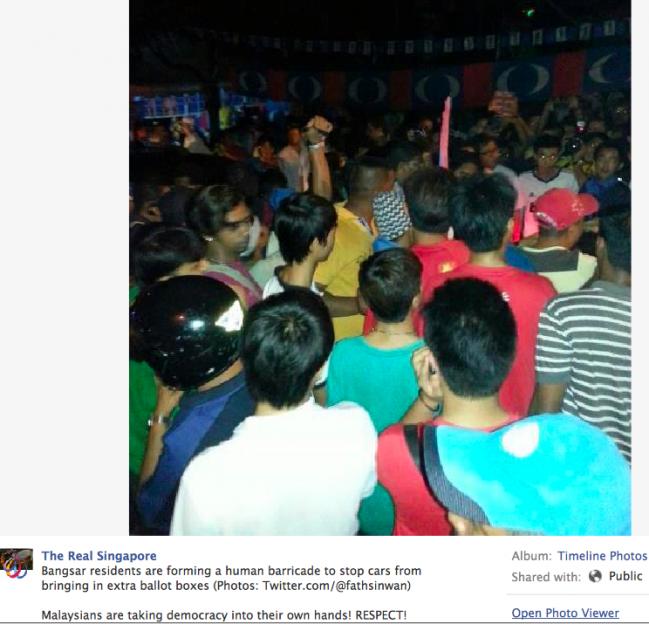 If you want to win an election against BN in Malaysia you have to stay put at the counting station!

How they tricked Wong Tack

The counts were all going the way of DAP through the evening, until suddenly last minute turnarounds went in favour of BN.

Listent to what happened to Wong Tack, who has lead the Lynas protest Bentong.  He was leading by 3,000 towards the end of the count.  When suddenly the lights went out!

During this dark period a new ballot box of ‘postal ballots’ was introduced, which were then counted.  This is against election law for votes to be introduced at the last moment. After these were counted Wong Tack’s majority of 3,000 was turned around to a minority of 300.

Apparently all the postal voters were unanimous for BN, whereas the non- postal votes had been fiercely in favour of Wong Tack.  Where did these postal votes come from ? 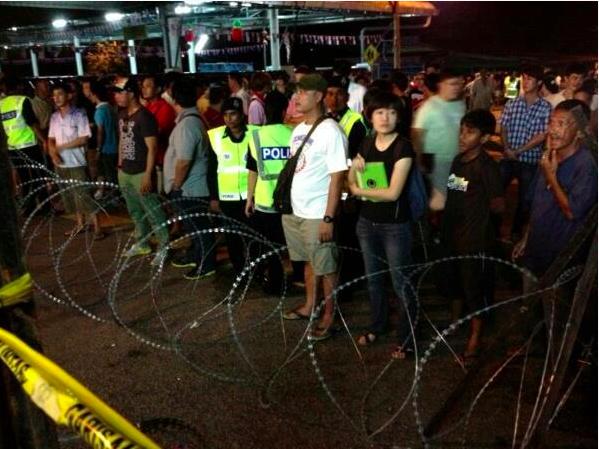 Meanwwhile, the BN controlled TV stations kept up a night of saying that their party had won.  By 1230am they were claiming a win and getting ready to swear themselves in and the TV was reporting the ‘fact’!

Observers of the election started to wonder why the delay on declaring so many counts where PR was leading by thousands?  It soon became clear.  At count after count illegal late arrivals of ballots boxes started being sneaked in under police escort.

Take a look at what happened in Johor. 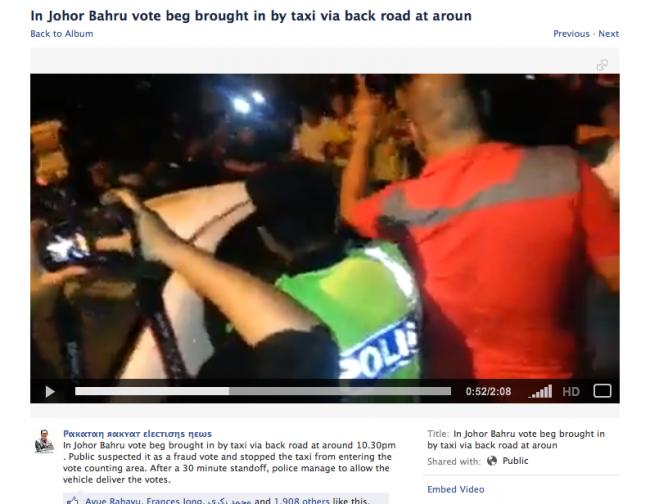 Ballot ‘re-enforcements’ to help out flagging BN in Johor

The strategy had become clear.  The media held off announcing the PR wins, while promoting the BN  wins all evening until the seat where PR had been leading had been ‘sorted’ by the late ballot box arrivals.

Anwar Ibrahim who had announced an earlier victory was forced to announce there had been massive fraud.  As dawn breaks tomorrow Malaysian will have to make up their minds if they are prepared to be fed up another pretend election charade at all this fuss and expense. 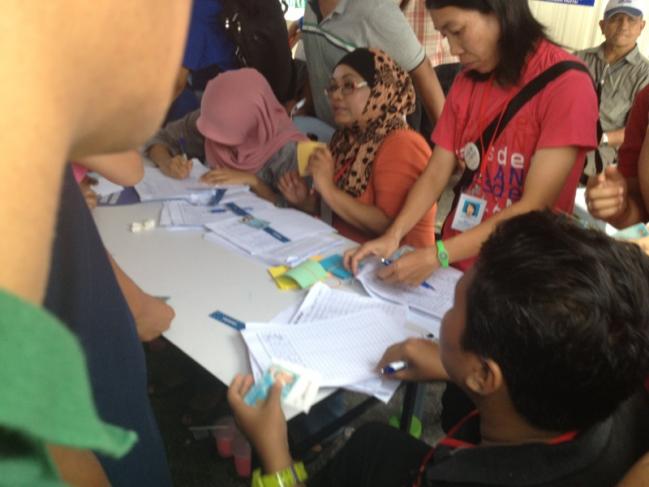 “SK Sri pandan this afternoon around 1.45pm” – more BN workers with no shame, handing out vouchers to voters.

The evening ended with seats bullied and wrested away by a stone faced Najib who could clearly not revel in a victory he clearly had not really won.

Next to him sat Muhyiddin Yassin, who is now wondering in how many days he can take over his job.  The PR coalition parties have not accepted this bludgeoning.  They are collecting their information from an evening of black outs and stray ballots and last minute bus loads of ‘voters’ escorted by police and they will contest Najib’s sour tasting ‘victory’. 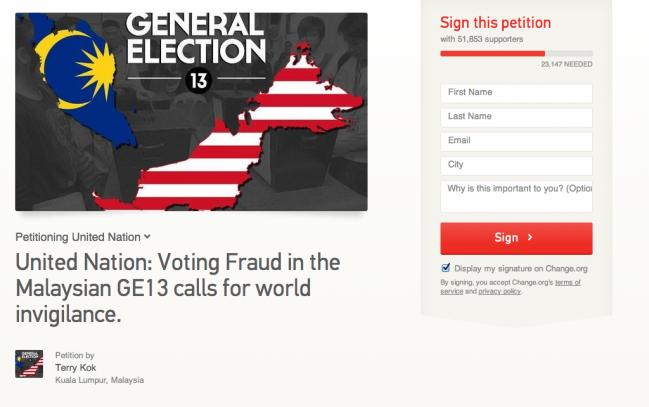 Malays are registering their disgust at the UN…