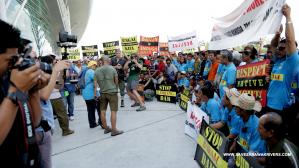 The US$1,700 entrance fee to Taib’s showcase dam building conference, which opened at the Borneo Convention Centre today, is well beyond the means of all the poor folk who stand to be affected by his catastrophic plans to swamp Sarawak.

However, they gathered in protest outside and made their voices heard and their presence felt anyway.

Taib had made provision for a group of selected stooges from Murum and elsewhere to be allowed inside the conference to give an impression of native support.

However, at least 300 demonstrators had made their way to Kuching to protest outside and they claim that it is they who represent the majority of their people and they demanded to know why they too have not been allowed representatives to attend the International Hydropower Conference? 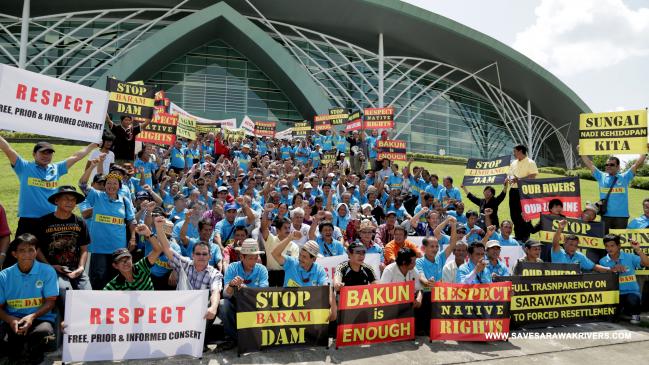 Thanks to today’s protest International delegates from the dam building industry can no longer be in any doubt that if they get involved in SCORE they are betraying the ‘Sustainability Protocol’ they claim to uphold.

This Protocol requires proper information for and consent from native communities affected by dams; proper environmental assessments and an overall consensus that there is no sensible alternative to a dam being built.

None of this has been achieved with any of Sarawak’s dams so far, including the Murum Dam now completing construction.

To the contrary, Taib’s extraordinary SCORE programme is being pushed through against massive native opposition and with no justification other than that the Chief Minister reckons it is a pretty fine way to get even richer than he already is. 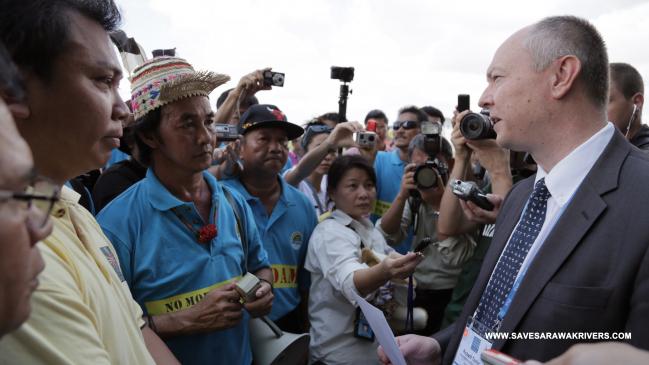 Richard Taylor, the Executive Director of the International Hydropower Association comes out to say he is ‘listening’

The dispute over the results in the Baram seat at the recent election is also a heightened embarrassment.

Taib will want to tell delegates that he won this seat and that this shows the popularity of his projects.  However, everyone in Malaysia knows Baram is the most disputed of the marginal seats that are now coming under scrutiny for blatant rigging earlier this month. 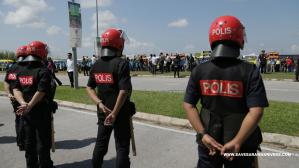 Usual intimidation by riot police, but the occasion passed off peacefully

This rigging concern comes on top of the existing gerrymandering and the refusal to enfranchise well over half the population in key areas and also after the outrageous bribery of impoverished voters.

Despite such disadvantages and the iron control of the media and all government employees by BN, the Baram count was first won by the opposition candidate Roland Engan.

Engan had fought his anti-dam focused campaign against the huge power and wealth of BN in this enormous seat, where government types travel by helicopter while the rest struggle about in longboats or on useless state roads.

But after the initial declaration in favour of Engan, the far too familiar scenario of lights going out in counting centres and disputed counts set in.  Eventually, lo and behold, when the lights came on and the ‘confusion’ cleared, Engan was judged by BN’s tame Election Commission to have lost Baram after all, by Malaysia’s slenderest majority of 198 votes!

Baram is one of the key seats that is due to be contested by PR in court and the full details of this particular scandal and of Taib’s overall handling of elections in his rural seats will come under scrutiny then.

Meanwhile, international delegates should be wary of Taib’s claim that he ‘won’ in Baram or that this signifies that the local people are enthusiastic about his plans to wash away their homes, so that he can generate electricity for aluminium factories in which he has a significant personal stake.

Demonstrators say that many of the conference delegates showed interest in their protest, as they walked into the grandly built Borneo Convention Centre built by Taib’s family company on the Kuching Isthmus and run by his sister Raziah.

“They were coming out to get copies of our leaflets and to talk to us” one of the demonstrators told Sarawak Report.  “We also learnt that the controversies and concerns over the Sarawak Dam projects were frequently raised by delegates during today’s conference session” 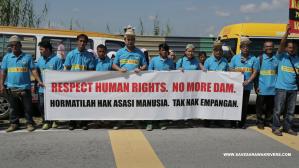 Clear message for all to see

Delegates who read Sarawak Report will learn that the Isthmus development project was launched by confiscating land from rightful owners at pitiful compensation prices, which has then been handed to CMS and other companies linked to the Chief Minister’s family to develop.

They may finally realise (if they did not before) that this is how Sarawak is run and that any company that gets involved in this despotic state will be tainted by the association.

An alternative and completely free conference is being held tomorrow, May 23rd at the Riverside Majestic Hotel to enable people who have not been granted access to the Hydropower Conference, either because they can’t afford it or because they have been refused entrance for protesting against the dam. 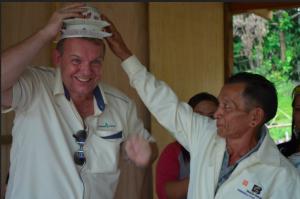 Posing with the natives (a paid Pengulu), but when is Torstein going to make Sarawak Energy accountable?

The Executive Director of the International Hydropower Association, Richard Taylor, has himself indicated that he would like to attend the alternative event.

Organisers say that everyone is welcome and refreshments will be freely provided to all.

However, there is a view that Taylor needs to be more forthcoming in his explanations of the IHA’s conduct in Sarawak than Sarawak Energy’s Chief Executive Torstein Sjotveit has managed so far.

Sjotveit is ready to tell anyone who will listen that he is working for the people of Sarawak and not his boss the Chief Minister, to whose companies he has handed over US$220million in contracts.

He also says he is not motivated by his multi-million ringgit salary to be obedient to Taib’s wishes.

However, Sjotveit consistently refuses to answer straight questions about the lack of transparency in the handling of Sarawak Energy contracts (see his entertaining venture into our comments section) and prefers to challenge others about irrelevant issues instead of demonstrating appropriate accountability by a public company.