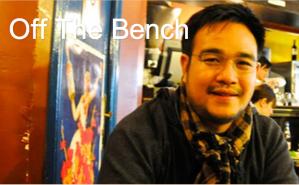 Drinks cabinet at the Holiday Inn Dhaka? Look like Dax put his foot in his mouth tweeting last week

Unlike PR opposition figures, who are getting arrested for questioning the conduct of the 5/5 election on behalf of the majority of the electorate, UMNO bloggers are still enjoying freedom of speech.

However, judging from what some have been saying, Najib may need to shut them up too!

Consider the Tweets put out by one of the known henchmen of former youth leader and recently appointed Sports Minister, Khairy Jamaluddin in past days.

Dax Muhamad, we understand, spent much of the election period in Bangladesh, despite his passionate support of UMNO for whom he blogs.

Why would such a fellow sacrifice his precious opportunity be part of the exciting GE13 campaign?

One might conclude from his Tweets that it was because he was appointed to an important mission in “Bangla”.  Here is one of them:

Given that one of the biggest controversies during the election period surrounded the revelation that secret Air Asia and Malaysia Airways chartered flights had been organised by UMNO to fly thousands of suspect voters over from the plantations of East Malaysia to KL, this Tweet by a key UMNO activist just days after the election begs some answers.

In the context of airlines in Malaysia there is only one Fernandes, Tony Fernandes the Head of Air Asia.  Air Biman is evidently Biman Bangladeshi Airline, based in Dhaka where he was blogging from.

Therefore, Sarawak Report would like Dax Muhamad to explain exactly what he means by saying in such a context:

“Big up to Fernandes n even bigger alpha up to Air Biman for making shit happen 5/5″?

Why does he go on to say (translated)

Consider the whole sequence of these Tweets on May 10th.  Because he elaborates on the above highly suspicious statement by explaining that “UMNO owes Banglapura large”. 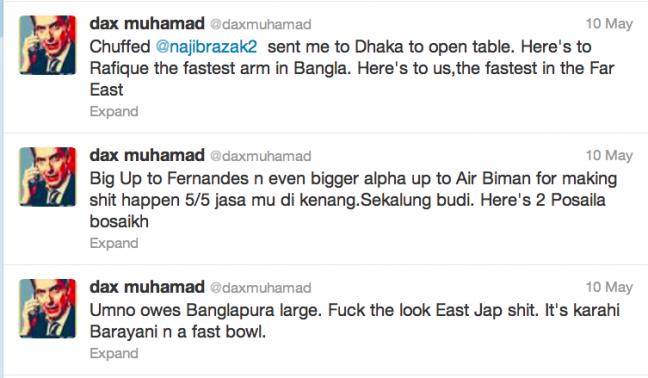 10th May – “Big up to Fernandes and even bigger up to Bagladeshi airline Air Bimina…..UMNO owes Banglapura large”

A glance at Dax Muhamad’s tweets confirms that he is in frequent touch with then UMNO youth Chief Kairy Jalamuddin and indeed a spread of top UMNO figures. 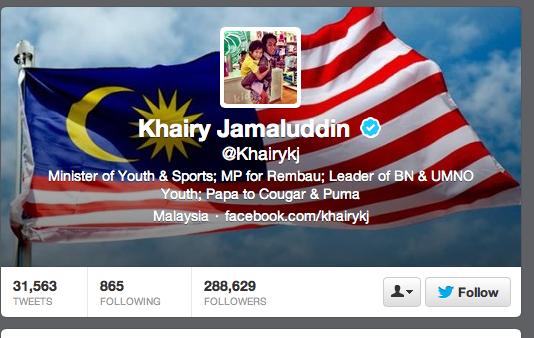 So, what are we further to make of the claim that it was najibrazak2 that sent him to Dhaka and why does UMNO owe the “Banglapura large”? 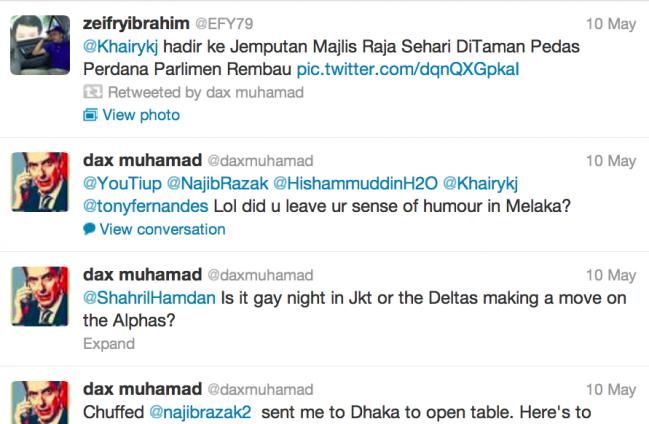 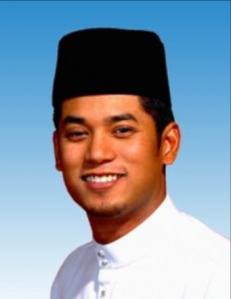 Dax Muhamad’s youth leader associate Khairy Jamaluddin was sky-rocketed into ministerial office straight after the election. Of course, in another high-flying move he did also marry the daughter of the previous PM.

Until Dax Muhamad comes out with a plausible explanation for these public Tweets, the rest of us are entitled to speculate.

After all, Muhamad is a known side-kick of the former UMNO youth leader Kairy Jalamuddin, who in turn was a known ‘fixer’ for Najib Razak.

There was widespread surprise and annoyance when straight after the election this young and inexperienced politician was rocketed to ministerial status.

As many pointed out, it has not been customary for former UMNO youth leaders to receive such stella promotion.

Others wondered whether the PM, who only just scrapped back into office as a minority leader on the back of blatant vote rigging, may be indebted to the ambitious young man in some way?

Could Dax Muhamad therefore reassure us that in giving “heartfelt thanks” to Fernandez and Air Biman for “making shit happen” on May 5th he is not referring to the organising of mass importation of phantom voters from Bangladesh and East Malaysia?

Tony Fernandes is, as every Malaysian knows, the flamboyant Chairman of Air Asia. Or was Dax speaking of some other Fenandes in this context? 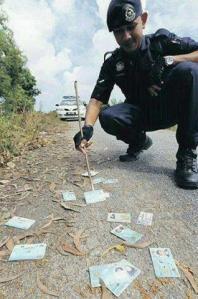 Fake ID cards? These were tossed by the side of the road after the election… from a departing bus of foreign phantom voters?

Moreover, since Fernandes is apparently being thanked for the already exposed air-bussing of voters from East Malaysia, but ‘Air Biman’ even more so, the implication is that even greater numbers of voters were shipped from Bangladesh.

If there is an alternative meaning to his remarks could Dax Muhamad please (given the topical and current widespread concerns about the shipping in of foreign nationals to vote) clarify his Tweets?

The impact of just a few carefully targeted voters should not be under-estimated.  UMNO changed the constitution in order to destroy the independence of the Election Commission, which it then moved into the PM’s own office.

This, along with the Special Branch assessments of voting intentions in each area and the handy new system of early voting by police and the army, means UMNO has given itself the apparatus to scrutinise the electoral roll minutely and target accordingly.

The failure of the promised ‘indelible ink’ also meant that the busloads of suspect voters turning up at various polling stations (which were frequently escorted by police) could in principle have been rotated around a number of voting centres.

These are the issues being currently alleged in a number of disputed seats in an election where the 10 most marginal seats were determined by just 5,000 votes and where several seats that were originally won by PR were then over-turned after the Election Commission officials oversaw highly controversial recounts.

So consider Dax Muhamad’s general view on the issue of bussing voters, according to his own re-Tweet:

Can he assure us he did not get a little more active than this during this nail-bittingly close election in which his party in fact lost in the popular vote by a very clear margin? 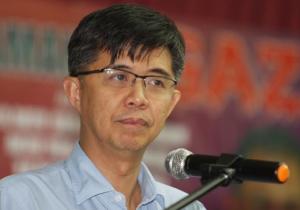 In the end, confronted with indisputable evidence, UMNO confessed that it had indeed used the services of Fernandes and Air Asia/Malaysia to transport what it claimed were legitimate voters to KL.

They have yet to respond to Bersih’s point that such actions are against election regulations.

Will Dax now explain whether thousands of ‘legitimate Malaysian voters’ were likewise rounded up by UMNO and given free flights back to KL in clear contravention of EC rules?

BN have no right to go round arresting senior opposition politicians (who after all received a larger popular mandate than they did despite the voting irregularities) without addressing the very valid questions that this series of Tweets forms just a small part of, over the conduct of this election.