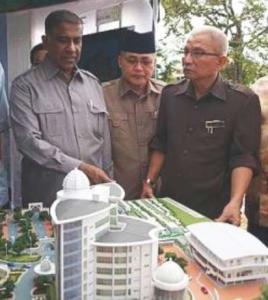 A flurry of denials poured out last week in response to this site’s reporting on the questionable assignment of projects by the Ministry of Islamic Affairs.

In particular, the Majlis Islam Sarawak (Sarawak Islamic Council) issued a 5 page rebuttal, selecting what it identified as nine issues raised in the report and then apparently denying them. [Click for translation]

However, nowhere in that 5 page document were the names Eastbourne Corporation or Daud Abdul Rahman (Minister for Islamic Affairs) once mentioned.

We ask why was the central issue of our investigation, which was the apparent conflict of interest in the awarding of a multi-million ringgit building project to Daud’s own company, not addressed in this wordy response?

Daud Abdul Rahman is Minister for Islamic Affairs and a key board member of the state’s Islamic Trust.  The head of the Trust is, of course, his own political boss, Abdul Taib Mahmud, the Chief Minister.

So, whatever the details of the commissioning process in this case (which are still not made clear by the 5 page letter), Daud has an overall influence and authority over the commissioning of major Islamic projects.

A separate RM9,750,000million contract had been awarded earlier by LAKMNS for the same project. 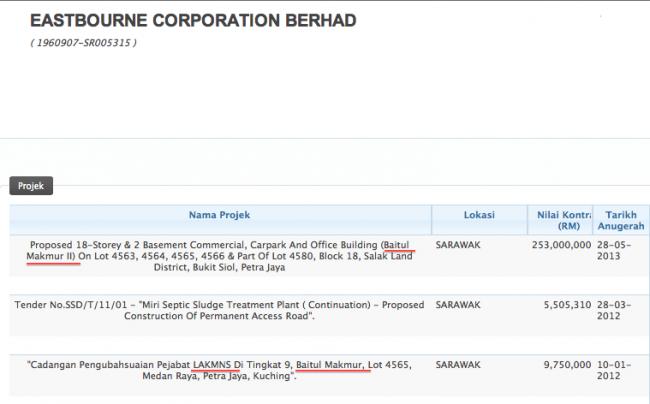 As registered in the official Construction Industry Development Board website

A month later records also show that the job was passed on to the building company Hock Seng Lee for RM228, which is RM25million less.

Daud Abdul Rahman is a key board member of this Lembaga Amanah Kebajikan Masjid Negeri Sarawak (LAKMNS), under the Chairmanship of Taib.  So, the central question of our article was how could it be appropriate to award such a contracts to his own company Eastbourne Corporation?

It remains unanswered, despite 5 pages of claims and denials in the letter supplied by the Islamic Council.

Board of Trustees of the Islamic Council that commissioned Baitul Makmur II, according to the RHB announcement of a RM300 million loan for the project  (Daud, circled, in blue)

We also wanted to know what had happened to the RM25million shortfall between the two contracts, given a series of recent complaints by opposition spokesmen over an apparent failure by the board to provide transparency in its accounts?

PKR representatives have asked whether this RM25million was returned to the Council?  The letter did not supply an answer to this either. 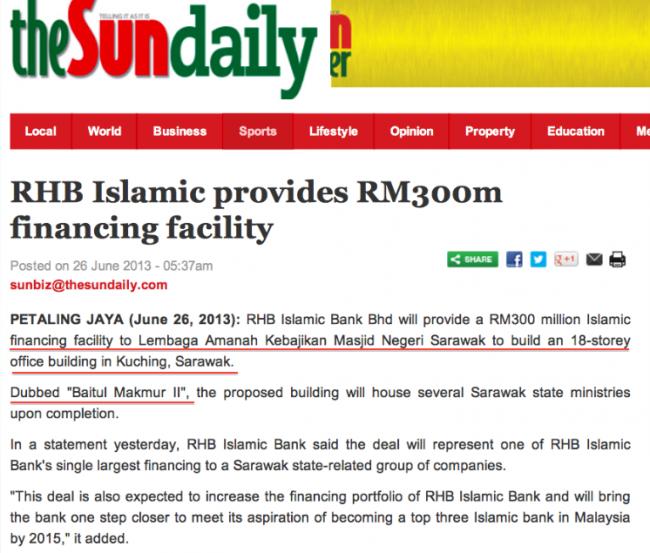 Sarawakians are also surely entitled to know what the remainder of the RM300million total borrowing for the building (see above) will be used for?

The Minister himself has also avoided any detailed explanations, weakly claiming he must now leave matters to the Malaysian Anti Corruption Commission, to which he has now been reported.  Yet, he stated to a press gathering last week:

“The project passed through Baitulmal Board, everybody decided on that,”[Daud statement, FZ.com].” “I don’t agree (I abused my power).”

Given that the Majlis Islam Sarawak contradicted this very point in its own statement, saying that the project was authorised not by the Baitulmal Board but by unspecified ‘other agencies’, this welter of official denials can only be said to have added to the confusion, rather than answering any of the relevant questions:

However, it is clear that the whole web of Islamic charitable bodies that have been set up to administer the various huge sums of money handed over by the State of Sarawak and by individual and corporate donations are in fact controlled by a close circle of people answerable to the Chief Minister.

As Assistant Minister for Islamic Affairs Daud is a key proxy and decision maker on Taib’s behalf over all the Boards and Departments funding Islamic projects. 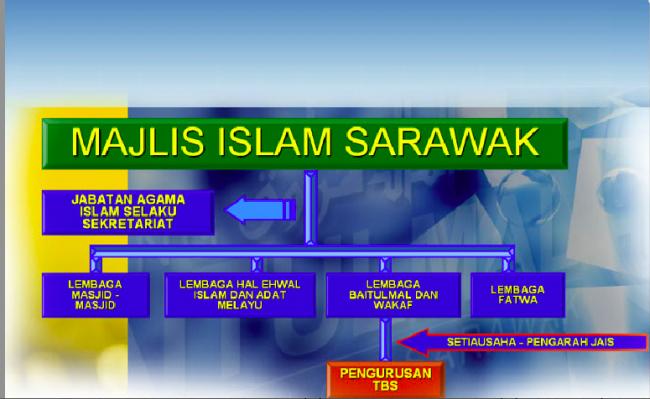 Complex web, but all Islamic agencies answer to the same temporal power in Sarawak – that of the Chief Minister and his agent the Assistant Minister for Islamic Affairs

Sarawak Report has also raised the point that a similar conflict of interest appears to attach to the Minister for Islamic Affairs in his other capacity as Minister for Infrastructure Development.

Eastbourne Corporation has in fact been awarded more than BIILLION RINGGIT in public projects, many of them at a time when its main shareholder (Daud) was in a key position to influence whom the state government should award them to.

In fact, Eastbourne Corporation was started up (as Sarawak’s ‘first ever Class A Bumiputera company‘) in 1991, the very year Daud joined the State Parliament and ought therefore have stepped aside from any from of private business that might benefit from contracts from the state. 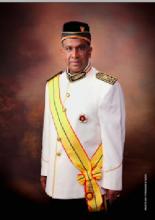 Time to explain the multiple contracts to his own company? – Daud Abdul Rahman

If this is not conflict of interest to the tune of millions of ringgit, then surely the Minister should come out and explain the situation?

Why does he need to wait for the toothless MACC to “decide” before he speaks out?

This leads to wider questions.  As we have further reported, the Eastbourne Group of companies has also been awarded vast areas of plantations and timber concessions, all while Mr Daud has been one of Taib’s key political allies in the State Government.

In 2007, for example, Daud was awarded 6071 hectares in Dullit for a mere RM3.75million. The following year the Minister sold 80% of the company to WTK for a staggering RM23.4million – over RM20million profit from public lands.

Such rewards for Taib’s political allies follow a very familiar pattern in Sarawak.  And, under these circumstances people are entitled to ask has Eastbourne acted as a proxy for Taib himself?

After all, the Chief Minister has somehow become extraordinarily rich, while publicly taking none of the lands and concessions he has so willingly granted to ministers such as Daud, Naroden Majais, Alfred Jabu, Awang Tengah and many other political hangers on. 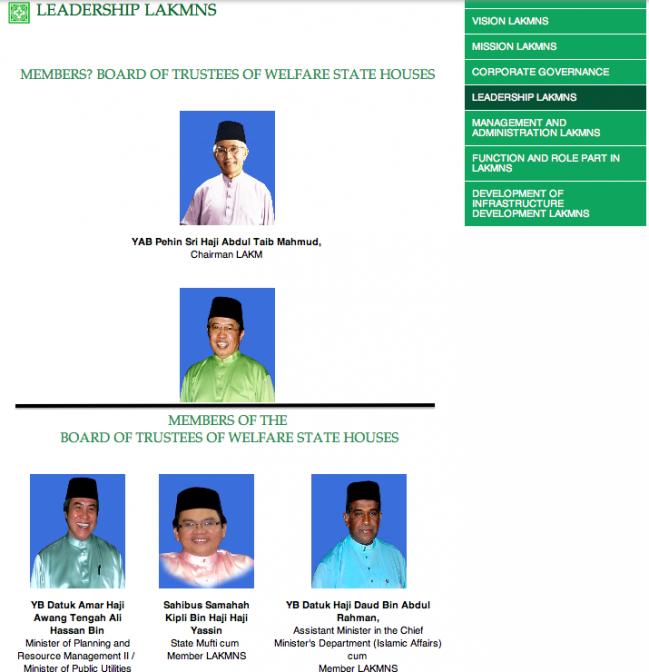 Rot from the top

Of course, if the Sarawak State Government had not fallen into the corrupted habit of handing out contracts secretively behind closed doors, instead of through open tender, it would be far easier to prevent such concerns over conflicts of interest.

But, it is clear that Taib Mahmud is determined to have full control of all the state’s finances to manage as he likes.

Not only is this Chief Minister also Finance Minister and Planning and Resources Minister, but he is also the Chairman of the Islamic Trust Board and Daud’s immediate boss as Assistant Minister of Islamic Affairs (see above the management of LAKMNS).

Therefore, Taib himself must have ultimately authorised the granting by the state of the RM253million contract to Eastbourne for the Baitul Makmur II building.  Why was it appropriate to give it to Eastbourne in his view?

It is Taib also, in his further immensely powerful positions as the Chairman of the ‘Land Custoday and Development Authority’ and Minister in charge of the Land & Survey Department, who has personally handed vast lands and plantation concessions, along with timber concession to various Islamic organisations.

The Islamic Council refers to these handouts and the booming level of public and private contributions in recent years as “aggressive initiatives” to “improve the economic LAKMNS Muslim community in Sarawak and also indirectly benefit the whole people of the State.” 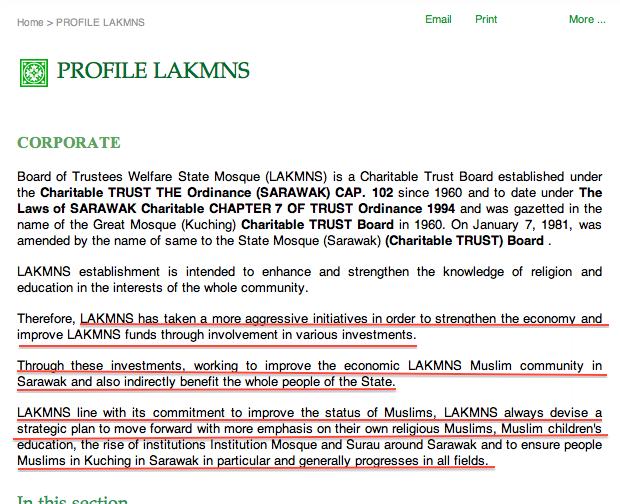 Are Muslim institutions being singled out for financial support in the majority Christian state of Sarawak?

Given this agenda to ‘strengthen the economy’ of Muslim institutions in the state, the people of Sarawak are also entitled to ask what is being given in terms of public money and public resources to other religions, including the majority Christian community, while LAKMNS moves forward with its “strategic plan” to improve Muslim children’s education and generally progress in all fields?

And Muslims themselves are entitled to know exactly how much money is being spent on people in need and community projects, compared to fat contracts passed through the hands of select  Ministers to construct grand buildings?

For these and many more reasons it is clearly high time Taib and his henchmen heeded calls by the opposition parties to open the accounts of the state’s Islamic Council to full public scrutiny.