Everything Is 'Relative' in Sarawak - The Answer To The Melikin Mystery? EXCLUSIVE! 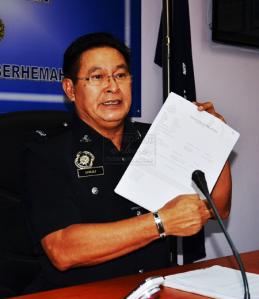 The men in blue are ‘shocked’ Mohd Jamali told the press. They had not heard of all this intimidation.

That is to say, the Serian District Police Chief, Mohd Jamali Umi, turns out to be a close relative of the Planning Minister Awang Tengah, who controls one of the companies controversially  logging the area of Melikin.

Numerous insiders have now confirmed that Jamali is none other than Tengah’s brother in law (their wives are sisters), a fact that was believed to be unknown to fellow BN politician James Masing when he launched a federal enquiry into the whole mysterious matter last Friday.

Because, what everyone was wanting to know was why are the Serian police not doing anything to protect Melikin residents against well-publicised attacks by gangsters linked to these logging companies?

‘We cannot allow gangsters to rule this country’ – James Masing

Masing had made his public statement after the Serian police chief had astonished everyone by declaring that he and his ‘Boys in Blue’ had no knowledge of gangster activity in Melikin!

Jamali had claimed to be “shocked” by “unfair” complaints that police were “turning a blind eye”.

In response, several villagers, including 5 Tua Ruhmai, had arrived in Kuching on Friday to beseech the Dayak political leader, James Masing for support.

They explained the months of violent hell they have been subjected to by armed, tatooed Sibu gangsters, who have been ranging their Native Customary Rights land on behalf of the controversial concession companies United Teamtrade and Memaju Jaya.

A major shareholder of United Teamtrade is the assistant and supposed nominee of Planning Minister Awang Tengah, while a large stake in Memaju Jaya is owned by the former local YB Frederick Bayoi.

In response to the pleas for help, Masing pressed the current Assemblyman for the area, rich-kid Snowdon Lawang, to join him in a press conference of their own, where he announced to the world that he would get to the bottom of the affair, by handing the whole matter over to headquarters in KL and the MACC! 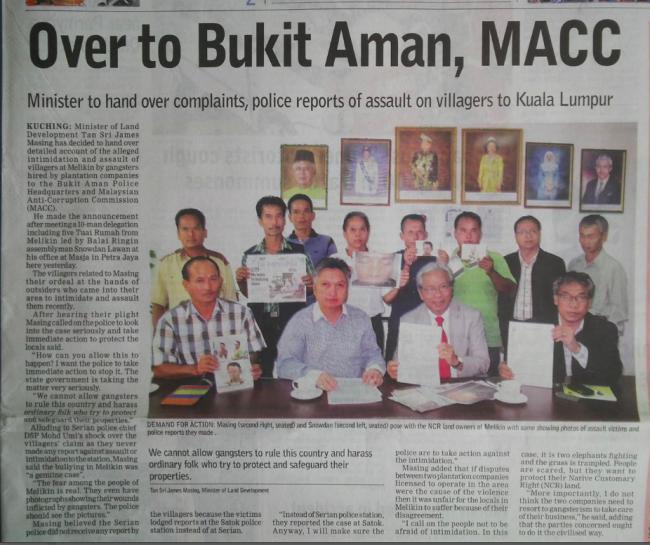 At the conference Masing was quoted as saying:

“How can you allow this to happen? I want the police to take immediate action to stop it. The state government is taking the matter very seriously. We cannot allow gangsters to rule this country and harass ordinary folk who try to protect and safeguard their properties.”[Borneo Post] 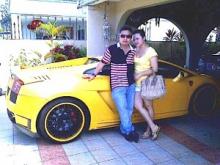 Those in attendance, however, reported that Snowdan Lawan, the local YB, looked uncomfortable at this public gesture by his senior fellow politician.

“He knows what is going on”, one insider told Sarawak Report, “but it was another thing to explain the whole matter to Masing”!

Lawan, whose father made millions as a car import concession-holder and then inserted his son into public office, has indeed himself consistently failed to take action on the long-running gangster problem in his area.

We have reported how when villagers originally turned to him for help, he told them the matter was “too sensitive“, meaning, they believe, that the companies were too closely connected to strong men like Awang Tengah!

This latest and apparently innocent intervention by James Masing in the increasingly worrying situation in Melikin came just two days after locals and newsmen were left exasperated by the extraordinary public statement by the Serian police chief himself. 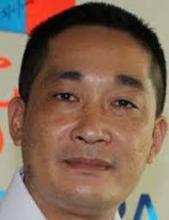 District Police Chief DSP Mohd Jamali Umi had called his own press conference on Nov 6th, to respond to reports in the Borneo Post and Sarawak Report about the rising level of gangster intimidation and attacks.

He was also prompted by a statement issued by the PKR lawyer and State Assemblyman Chee See How, who is representing 17 affected villages in Melikin, asking for logging to be suspended in the light of the up-coming court case.

Unbelievably, the police chief had nevertheless told the press conference that there was nothing wrong!

Mohd Jamali sensationally claimed that his police force had received no reports of any violence or intimidation from Melikin, despite months of reports in the papers of beatings, intimidation and attacks by armed thugs!

‘Jamali confirmed that they had received 13 reports from the villagers, but none of the reports mentioned anything about gangsters’ participation. “The reports only revolve around the damage caused by the workers on the villagers’ fruit trees and crops and that they (villagers) are seeking compensation,” he said.‘ [Bernama]

Furthermore, in response to the concern expressed by villagers over the apparent disappearance of any police presence in the affected localities in recent weeks, Jamali pleaded total ignorance about why this presence might be needed:

Serian police chief Jamali Umi said background checks on over 200 workers of the two companies revealed that none of them had any previous criminal records. “The workers comprise locals and foreigners with valid working permits,” he told a media conference at Serian police headquarters here today.'[New Straits Times]

And the Borneo Post reported that the Police Chief was adamant at the press conference that  there was “no basis to the bullying claim“: 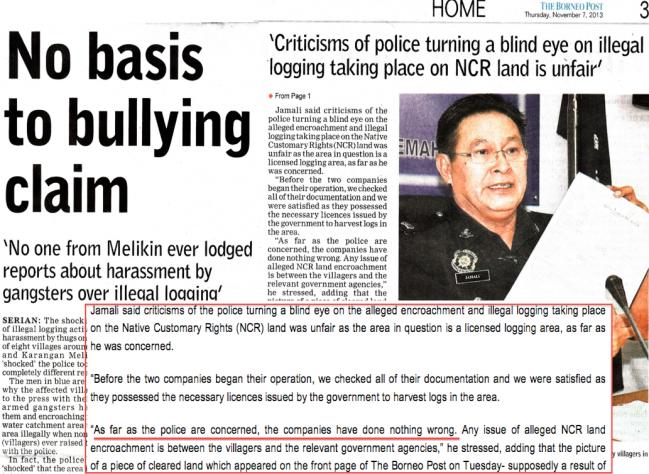 What about the EVIDENCE?

Those present at the press statement reported complete astonishment and exasperation at such remarks.  What could the police chief have been playing at?

How could he have missed the highly publicised incidents about gangster attacks that have featured in the newspapers over past months?

What about the victims of vicious beatings, like Tua Rumah Sujau, rammed off his bike and beaten into a pulp on October 15th, and Surik anak Muntai, whose beaten body has featured widely since he was attacked by a gang as he picked up his son from school? 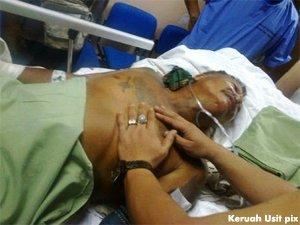 One of the earlier victims of gangsters in Melikin was Surik Anak Muntai. There have been more since.

How could the police chief not be aware of these incidents in his area, people asked, and even if the victims had not lodged a formal police report, why would that prevent a full investigation?

Some wondered if fear of reprisals had prevent locals from lodging police reports?

However, when such a crime has been publicly committed and reported in the newspapers, the police should of course investigate, whether or not the victim has been able to report it.

In such a case the victim is merely a witness, without an obligation to report at all (merely to tell the truth).

The local chief of police must surely understand the duties of his ‘boys in blue’ in this respect and he must surely be aware when famous crimes in his area are being widely reported in the press? 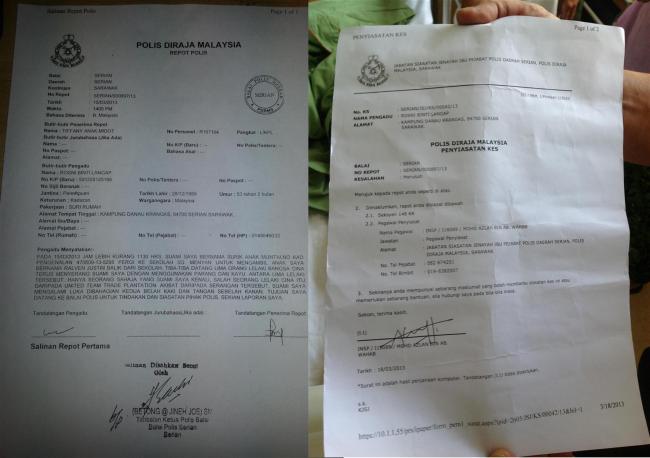 There were police reports of violence after all!

However, there is an even more damning aspect to this mystery situation. Because, Sarawak Report can reveal that, contrary to the claims of the ‘related’ local police chief, police reports HAVE in fact been lodged about the violence in Melikin.

We have obtained photographs of at least one report lodged about the brutal attack on Surik anak Muntai back in March (see above and below): 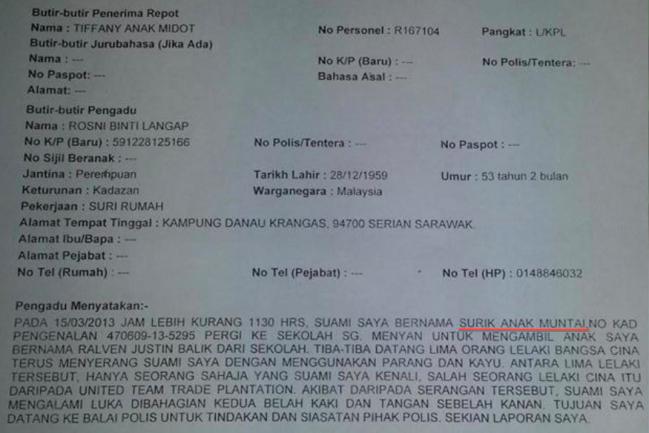 What about the arms haul by the police themselves?

And, police reports aside, what about the huge publicity just last month, which attended a major arms haul in Melikin by Mohd Jamili’s own police force?  The officers retrieved a shocking cache of weapons after searching the plantation and timber camps in the area, in response these very complaints about gangster violence.

This story has been reported all over Sarawak.  Did the police chief suffer amnesia about his colleagues’ most dramatic news story in years, which happened just last month, when he told the assembled press that there had been no evidence of gangster violence in his area? 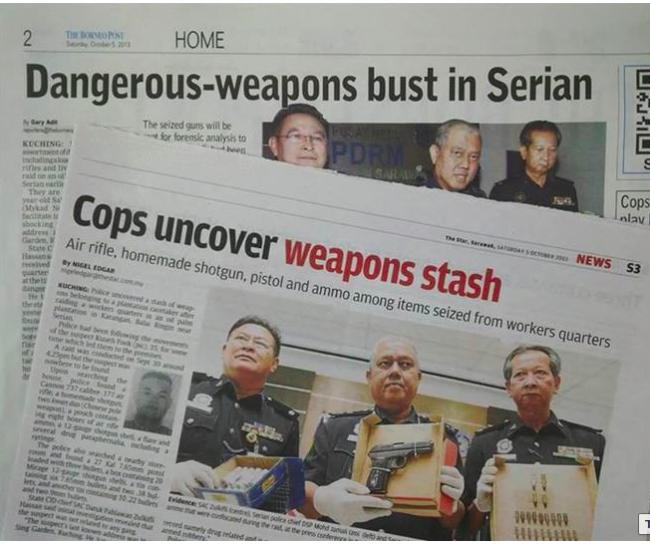 Just to remind the police chief, this story of an arms haul in Serian appeared in the papers on Oct 5th!

One has to ask, is the police chief of Serian simply not up to his job that he should claim just four weeks after this story that there has been no evidence of gang violence in his area, or is there a ‘relatively’ different reason?

On Friday, James Masing publicly agreed that it was nonsense to say there was no evidence of gangsterism and attacks on Melikin locals:

Alluding to Serian police chief DSP Mohd Umi’s shock over the villagers’ claim as they never made any report against assault or intimidation to the station, Masing said the bullying in Melikin was “a genuine case”. “The fear among the people of Melikin is real. They even have photographs showing their wounds inflicted by gangsters. The police should see the pictures.”[Borneo Post]

However, the Dayak politician chose to conclude that the reason for the police chief’s mysterious ignorance and astonishing amnesia might be owing to a mistake, on the basis that reports may have been made to the wrong police station!

Our latest information suggests that the reason is ‘relatively’ much more simple!