Torstein Should Apologise To Penan! 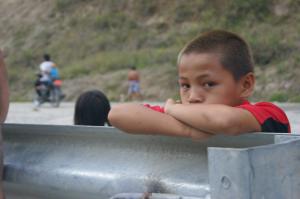 What is Mr Sjotveit doing to improve the lives of these people?

On November 7th, the Norwegian head of Sarawak Energy took great care to make his accusations against the Penan tribespeople at the Murum Dam blockade as public as possible, by insisting on broadcasting them in full on our site.

In an email to the Swiss NGO BMF, which he copied into our comments section, he claimed that these families had been extorting money from members of the public, by setting up a toll on the public road.

Such an act is, of course, highly illegal, since it involves taking money from people by force.

So, it was a very serious charge to make against these gentle people, whom his company are throwing off their lands.

What he said on Sarawak Report, after the arrest of 8 Penan by some 80 riot police on Nov 7th, was this:

“I am equally sure that you will suppress the truth and it will just be yet another lie you and SR will run for months.

The facts are that they moved the blockade downstream the public road and stopped all traffic to Murum and asked them to pay money to come through their toll arrangement, this is of course illegal and apparently the police arrested 8 of them for this.

I assume you will challenge me on this and make another story about it, but I am confident that between your parallel, fantasy reality and the actual reality, at the end the facts will prevail.” [Torstein Sjotveit, CEO of Sarawak Energy, email comment to Sarawak Report]

In this manner Mr Sjotveit accused both Sarawak Report and the Swiss NGO BMF of deliberate lies and the Penan of appalling and illegal behaviour. 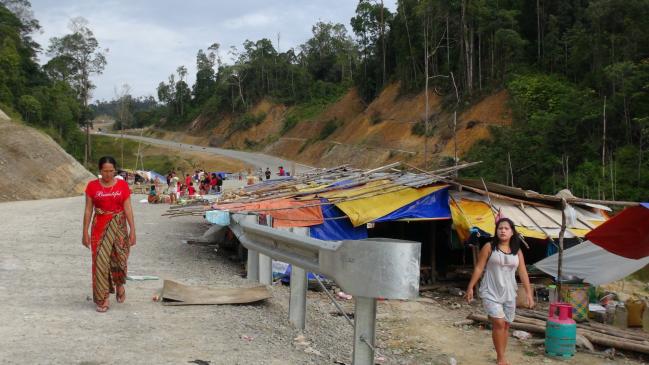 Tough existence on the blockade – these people need support, but they aren’t forcing people to pay money

Mr Sjotveit however seems prone to making such accusations, while indicating that he is above the menial job of having to substantiate such remarks, which he has consistently failed to do.

Consider his earlier reply to BMF when they asked him to present information about the tendering process used by Sarawak Energy when it favoured Taib’s son with contracts worth hundreds of millions of ringgit.

“We have good and clear answers to your questions, but up to now I have seen little merit in a serious dialog, because you have made so many statements that I and SEB are corrupted so I do not see any interest from your side to learn anything to the contrary to your many statements.”[Torstein Sjotveit, email to BMF 3rd Nov]

Does he really think that the rest of the world cannot see through such arrogant dismissiveness?  If he is fed up with the ‘lies’ of BMF, then clearly he should set matters straight by laying the facts on the table! 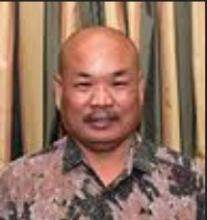 Sulok Tawie – leapt to the defence of SEB.

Torstein’s allegations against the Penan should also be set in the context of the row over the weekend as a leading member of the Sarawak Journalists Association denied that some SEB staff had ‘bad-mouthed’ the Penan during a press visit last month.

This was what had been reported to Sarawak Report.

Head of the Sarawak Journalists Association, Mr Sulok Tawie (who had earlier given a speech praising SEB) was indignant over concerns that the dam-builders had been putting about rumours about the Penan for “living of handouts and being lazy”.

Now, however, the SEB Chief Executive himself has made an even worse accusation against them than merely accepting handouts.  He himself has accused them of mugging passers-by for money!

No such charges were brought against the Penan

In fact, all of the Penan have now been released from custody by the police and it turns out that it was Torstein’s accusations which were wrong.

The facts HAVE prevailed and it turns out that the “fantasy reality” referred to by Mr Sjotveit was his.

According to the Penan’s lawyer, Abun Sui Anyit, the 10 released natives “have been requested to attend Court in Belaga on 26.11.2013 to answer charges under S.341 wrongful restrain and S.448 PC criminal trespass.” 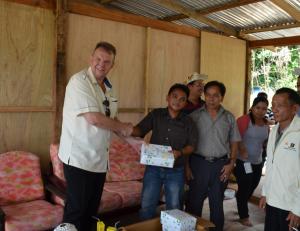 ‘Helping the Natives” – one of Torstein’s favourite poses.

Mr Abun Sui Anyit has made plain to Sarawak Report that these charges do not relate to any accusation of extorting money from members of the public in the manner described in the accusations made by Mr Sjotveit.

Nonetheless, the Penan are extremely put out over their arrest and deny these charges and will be defending themselves heavily in court.

After all, who can blame their fury at being charged with ‘trespass’ on their own ancient territories, on which Torstein’s company and the State of Sarawak so illegally began to secretly construct their dam back in 2008?

This Murum Dam has been forced into existence in violation of all due process and no agreement has yet been reached with the protesting natives, whom Torstein is now trying to drive into accepting his mean compensation deal, by closing the flood gates and drowning their homes.

Abun Sui Anyit announced this weekend that the Penan themselves have now lodged their own case against Sarawak Energy and the Sarawak State Government, which has been found to have violated the constitutional land rights of the natives of Sarawak time and again in recent court judgements.

The lawyer has also issued a statement on behalf of his clients complaining over the problem of intimidation by drunk police, whom he says are being supplied with alcohol at their guard posts by SEB:

A letter has also been sent today by 27 NGOs to the Malaysian Prime Minister requiring that the Sarawak State Government fulfil its human rights obligations to natives who are being thrown off their land to build dams. 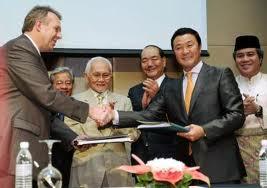 Helping his boss – Sjotveit’s other even more favourite pose. Bringing in business for Taib’s family companies!

An apology is therefore extremely pressing indeed on Mr Sjotveit and we would like to hear it.

At the time of the arrests the police officer in charge of the area made plain that at least two police reports had been lodged by ‘members of the public’ complaining that they were being forced to pay money to pass through the blockade. 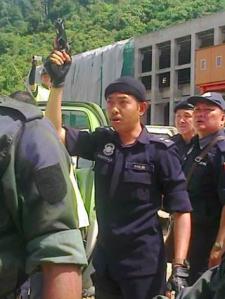 However, it is clear that the police have not found the evidence to bear this out.  It simply does not appear in the charge sheet.

The Penan families, who are desperately short of food and provisions, had merely been asking for donations from passers by to help them keep up their protest.  Many will have been very willing to support them and their collecting tin contained RM700 in donations that were take by the police.

Yet Mr Sjotveit in his email seemed very certain indeed that the Penan were indeed extorting a toll from travellers. We ask how did he come by this idea and has he any connection with the people who lodged the original false reports to the police?

We also ask him to answer the allegation that his company has been fuelling the police forces who are attending the blockade with alcohol.  This would be a direct encouragement of drinking on duty, which is a serious offence, particularly when many are Muslim.  Does Mr Sjotveit deny the allegation?

Torstein Sjotveit’s comment to our site is here in full below.  Is not time for this intemperate, vainglorious and unprofessional man to be replaced as head of Sarawak Energy?

Off to bed: Just to make the picture complete, I went to bed lat night at about 1am after having sent this email to Bruno Mansers CEO Lukas Strauman:

Dear Lukas [Director BMF], I am sorry for the arrested Penans, but I hold you and other organisation that is advising them responsible for their problems. I am sure you know why they were arrested, but I am equally sure that you will suppress the truth and it will just be yet another lie you and SR will run for month.

The facts are that they moved the blockade downstream the public road and stopped all traffic to Murum and asked them to pay money to come through their toll arrangement, this is of course illegal and apparently the police arrested 8 of them for this.

I assume you will challenge me on this and make another story about it, but I am confident that between your parallel, fantasy reality and the actual reality, at the end the facts will prevail.

Lukas, I would urge you to start doing something useful for the Penans, we have plenty of Penan CSR projects that need resourceful people like you, why don’t you try to do something for them that can actually help them?

I am afraid I have to leave this conversation now as I must go to bed, contrary to yourself, I have serious work to do tomorrow supporting the Penans future and contribute to development of Sarawak for a better future for all Sarawakiens, that’s who I’m building for.

Sent from my iPad

BMF banner that has annoyed Sjotveit