"PROJECT UGANDA" - Why Was A UBG Bank Executive Employed As 1MDB's Investment Manager During PetroSaudi's Loan And Buy Out Negotiations? 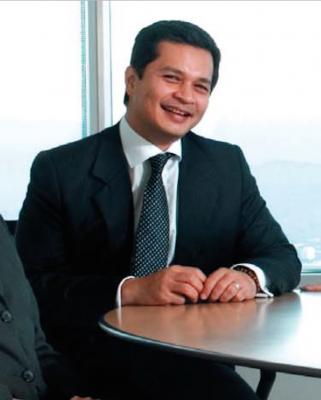 Nik Faisal Ariff Kamil, featured as the Executive Director of Investments for UBG in the 2008 Annual Report

Documents available to Sarawak Report highlight the key role played by a well-known contact of the tycoon Jho Low, called Nik Faisal Ariff Kamil, during the company PetroSaudi International’s negotiations to raise a further billion dollars in loans out of 1MDB in the course of 2010.

This was the same period during which PetroSaudi was also negotiating to buy out the Taib controlled bank, UBG.

At the time Nik Faisal was 1MDB’s Chief Investment Officer.

But, astonishingly, he also held the post of Executive Director of Investments for UBG.

Jho Low, meanwhile, was a member of the Board of the bank, having headed a substantial share acquisition a few months earlier.

Correspondence shows that Nik Faisal was looped into extensive discussions with PetroSaudi over what was described as “Project Uganda”.

This project appeared to be focused around the loans to PetroSaudi and also the buy out of UBG – given that the correspondence on “Project Uganda” email network referred to both these topics only.

It raises questions over whether Nik Faisal was essentially UBG’s ‘man inside’ 1MDB at this crucial negotiating time – acting as an effective cat’s paw for Jho Low? 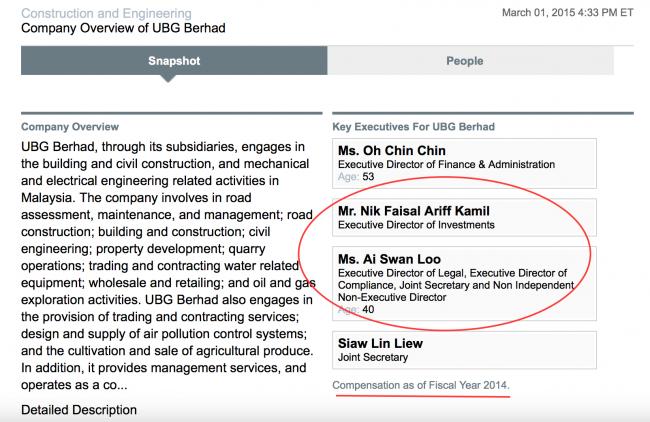 Nick Faisal and his senior colleague Jasmine Ai Swan Loo both moved to 1MDB, yet they are still registered as part of UBG’s key executive team – did Nik come over on ‘secondment’ to 1MDB during 2009?

In 2008 the Jho Low controlled company Majestic Masterpiece was issued a major share in the the Taib family owned bank, following a share swap deal, involving the purchase by UBG of shares in the highway construction company Putrajaya Perdana Berhad.

Low, who claimed he had a personal stake in the venture, then joined the board at UBG, which had been seeking a buy out for some time.

Nik Faisal was UBG’s Executive Director of Development at the time and is known to be close to Jho Low. He is now a Director of another highway construction company called Prolintas, which has received the contract to build the Damansara-Shah Alam Elevated Expressway. 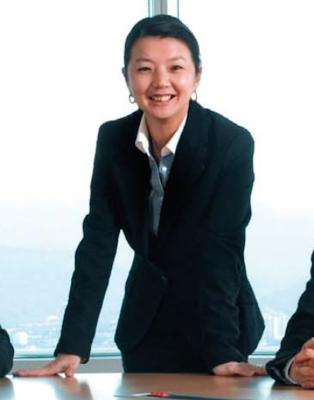 However, he also remains a Director of UBG, according to Bloomberg.

However, she too appears to have retained her position at UBG bank and also as a Director of Putrajaya Perdana Berhad.

Nik Faisal’s connections to Jho Low and the mysterious transactions linked to 1MDB have already attracted considerable comment, because of his role as the Director and Manager of another highly controversial government owned company called SRC Sdn Bhd.

SRC originally belonged to 1MDB and it took out a loan of RM4 billion from the Malaysian public’s Old Age Pension fund, Kumpulan Wang Persaraan.

Critics have repeatedly demanded to know the details of this transaction and what the money was for. However, information about the deal was removed from the 1MDB accounts through the transfer of the company to the direct ownership of the Finance Ministery in 2012.

Till this date the Ministry has failed to present SRC’s own illegally outdated accounts and the details have remained hidden.

Our evidence raises a clear conflict of interest therefore, in that Nik Faisal was working right inside 1MDB as its Chief Investments Officer throughout 2010, at the very time PetroSaudi was negotiating two further loans from the fund and was also engaged in buying out UBG bank.

Documents make clear that two further PetroSaudi loans totalling USD$1 billion (on top of the original $1 billion already invested through the joint venture in 2009) were drawn from 1MDB on 26th July and 8th September 2010.

Meanwhile PetroSaudi’s buy-out of UBG, which was announced in January, was completed in late September 2010.

Nik Faisal Ariff Kamil was continually consulted by PetroSaudi executives throughout this period, as the documents make clear, and he was the leading figure at the bank in the day to day negotiations over the raising of the loans.

He is referred to in emails as 1MDB’s Chief Investment Officer and enjoyed the email address: [email protected]:

As per my email below, attached please find all of the signed documents.

This is to confirm that all docs have been signed and have been couriered to you. We will also send you pdf versions later today. Please kindly execute wire transfer of usd500m in the accounts I mentioned for value today, 8 September.

Many thanks and best regards,

The “attached” documents referred to by PetroSaudi’s Patrick Mahony in the above email exchange referred to the so-called ‘draw down’ notices, through which the company availed itself of lending from 1MDB under the terms agreed when the joint venture was turned into a murabaha loan agreement, June 14th 2010.

In the week before the earlier July transfer by 1MDB, PetroSaudi’s Patrick Mahony had messaged Jho Low:

“Sent drawdown notice to nik. It is on uganda”

Virtually identical documents were sent between the players involved in Project Uganda for both the separate ‘draw downs’ of $500 million by PetroSaudi from 1MDB.

Letter of Agreement and Notice of Request for Additional Tranche

We refer to the murabaha financing agreement made between you and us and dated 14 June 2010 pursuant to which the Parties agreed, inter alia, that you would make available a murabaha facility to us upon the terms and conditions set out therein (the “Murabaha Financing Agreement”).

Unless otherwise stated in this letter of agreement (the “Letter”), all capitalised terms not defined in this Letter and all clause references shall be given the same meaning and interpreted in the same manner as in the Murabaha Financing Agreement. In addition, the term “Effective Date” shall mean the date on which this Letter is agreed to and acknowledged by you by your countersignature of this Letter.

(c)        that the Deferred Price applicable to a Transaction (as such term is construed in accordance with paragraph 3(b) of this Letter) and payable on a Deferred Price Payment Date be the amount of such Transaction;

(d)       that the Profit applicable to a Transaction (as such term is construed in accordance with paragraph 3(b) of this Letter) be calculated by applying to the outstanding Transaction the profit return rate referred to in the definition of “Murabaha Profit” in the Murabaha Financing Agreement (based on the outstanding amount of such Transaction); and

(e)        that any defaults and breaches of any Finance Document that are solely triggered by the matters contemplated in paragraph 2 of this Letter be waived in all respects for all time.

Please acknowledge your receipt of this Letter, and confirm your agreement to the above by signing and returning the enclosed counterpart of this Letter.

This Letter has been executed and delivered as a deed on the date which appears on the first page of this Letter.

We, 1MALAYSIA DEVELOPMENT BERHAD, acknowledge receipt of this Letter and we hereby confirm our agreement to, and undertake to be bound by, the terms and conditions set out in this Letter.

In each case the documents (see Annex A from the earlier July agreement) show that the staff at 1MDB divided the payments into separate accounts. 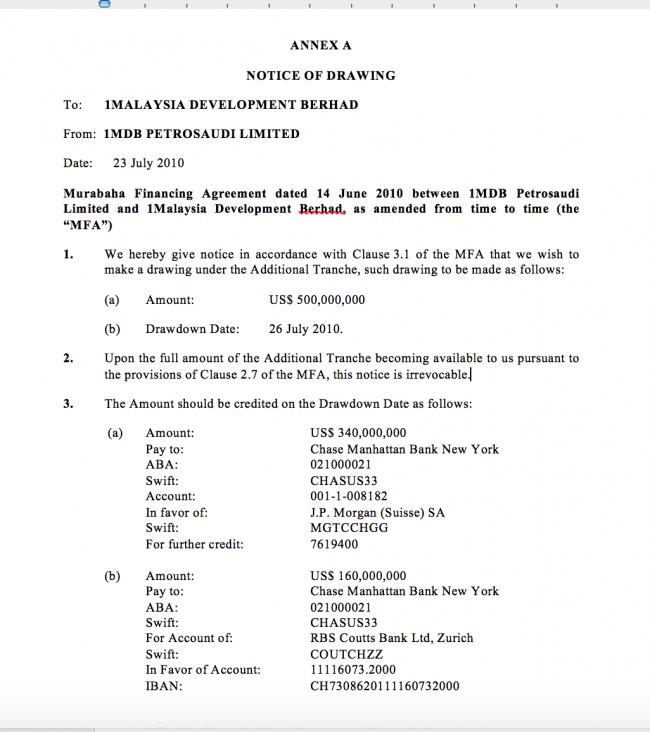 With regard to the payment of both tranches it can be seen that of USD$500 million $340 million was sent to PetroSaudi’s own working account at JP Morgan in Geneva and $160 million was sent to the RBS Coutts account belonging to the company Good Star in Zurich, which was controlled by Jho Low.

The documents relating to the Murabaha agreement were sent by PetroSaudi’s Patrick Mahony to the email addresses at “Project Uganda” in May 2010.

These included a copy of the agreement; a copy of PetroSaudi’s “Letter of Guarantee” to pay back the marabaha loan and a copy of a “Letter of Agreement”, whereby the PetroSaudi owned company 1MDB PetroSaudi agreed, as part of the deal, to buy out 1MDB’s shares in the original Joint Venture.

These documents show that PetroSaudi were nominally paying USD$1.2 billion for the 1MDB shares, providing a nominal profit to 1MDB of $200 million.

However, this was translated into a loan to PetroSaudi and the agreement provided for a further USD$1,5 billion of potential borrowing “with a maximum aggregate amount of United States Dollars two billion and seven hundred million (USD 2,700,000,000)”:

The inevitable concern is why did this Government run fund, chaired by the Prime Minister, allow such a clear conflict of interest amongst its most senior members of staff who were negotiating these vast loans to a company with an extremely limited asset base?

1MDB and PetroSaudi have consistently and continually denied that any money from 1MDB went into the UBG bank buy out, from which it has been speculated that Jho Low himself made a very handsome profit of several million ringgit.

To the contrary, the Malaysian media were encouraged to disseminate that PetroSaudi was a “cash rich” company “owned by the Saudi Royal family” and close to the Saudi Government, which was “ultimately investing in Malaysia”, all thanks to the growing close ties of the Saudi Royal Family with Prime Minister Najib Razak’ 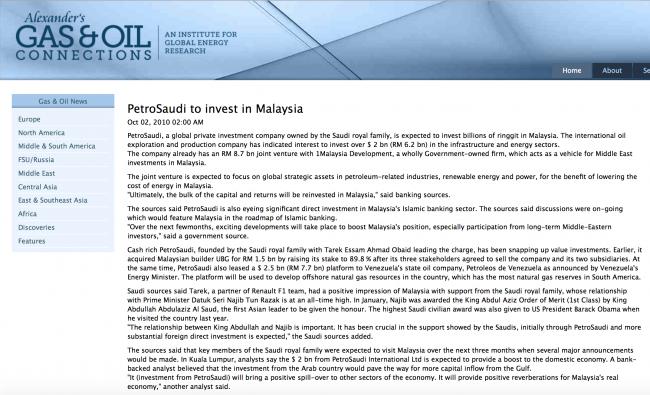 Spinning the press in Malaysia about “cash rich” PetroSaudi

But, if this was the case, then what relevance did the details of the 1MDB loan agreements with PetroSaudi have to the UBG buy out and why were they sent to the team at Project Uganda?

However, Sarawak Report has now demonstrated that little of this media spin of the time was true.  PetroSaudi was a company with a limited cash base, which was borrowing from Malaysia to the tune of billions of dollars, rather than investing in the country.

This media campaign and image building around PetrSaudi appears to have been deliberately orchestrated by the team at Project Uganda, based at 1MDB and PetroSaudi.

Significantly, in one example, the Project Uganda team were clearly collaborating over a press release about initial announcement by UBG bank of the buy out offer by PetroSaudi in January 2010.

PETROSAUDI INTERNATIONAL LIMITED MAKES RM1.4 BILLION FOREIGN DIRECT INVESTMENT ON ITS OWN TO REAFFIRM ITS CONFIDENCE AND COMMITMENT TO THE ECONOMIC PROSPECTS OF MALAYSIA

PSI intends to privatise and delist UBG, PPB and LLCB from Bursa Malaysia Securities Berhad and expect the take-over and delisting exercise to complete in the first quarter of 2010.

These emails (of which there are many more) show that Mahony and his collaborators at “Project Uganda” were sharing information about the details of the 1MDB loans throughout 2010 and also about the buy out negotiations for UBG.

It indicates that the two deals were being linked by a team of the same people working on the same project under the code name Project Uganda.

Nik Faisal Ariff Kamil, 1MDB’s Chief Investment Office, over from his other job at UBG, was clearly one key member of the Project Uganda team in looped into these emails.

Another was clearly Jho Low.