The Heat Is On Hakkasan - We Reveal The Link Between 1MDB And The Billion Dollar Nightclub Chain In Vegas EXCLUSIVE! 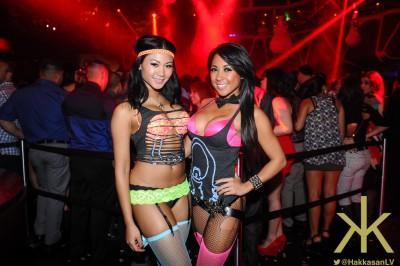 Sarawak Report has traced crucial evidence linking the Luxembourg bank accounts, which received hundreds of millions of dollars stolen from 1MDB, with the global Hakkasan nightclub and restaurant chain centred in Las Vegas.

Both the bank accounts, held in the name of Vasco Trust, and Hakkasan are owned by the former Aabar Chairman Khadem Al Qubaisi, who is now the subject of civil seizures of his assets by the US Department of Justice, relating to 1MDB thefts, and also a criminal investigation in Switzerland for suspected “fraud, dishonest management, forgery, money laundering, abuse of public trust and the corruption of foreign officials”.

Sarawak Report has now established a direct link between Vasco Trust and the Al Qubaisi-owned Tasameem Real Esate Company LLC, which is the shareholder of Hakkasan, meaning that Hakkasan is not ‘ring-fenced’ from 1MDB, as has been claimed by the managers of Hakkasan. 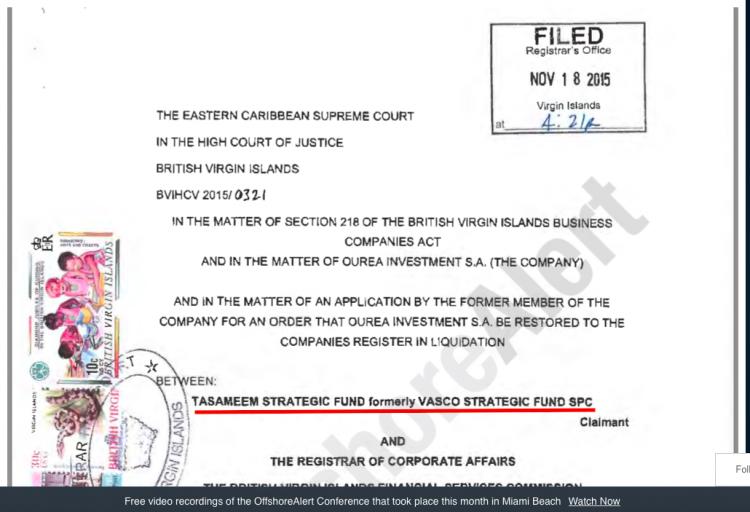 Vasco Strategic Fund (whose Director is Marc Ambroisien) changed name to become part of the Tasameem group of companies, providing a link in the money trail from 1MDB to Hakkasan.

The name switch provides a direct link between the Vasco account, which received all its money from 1MDB in 2012/13 and Tasameem, which by 2016 had registered a $566 million shareholder loan facility to its subsidiary Hakkasan.

Indeed Hakkasan’s 2013 accounts, signed off by Al Qubaisi himself, show that by the end of 2013 the Hakkasan Group had already received $266,000,000 in ‘shareholder loans’ from its parent company, which was cited as Tasameem, which is itself also owned by Al Qubaisi:

By 2016 the amount owed to Shareholder Tasameem had increased to $566 million, according to the accounts

2013 was the year during which the nightclub chain rapidly expanded with its first key acquisitions in Las Vegas, starting with the Omnia nightclub having opened in April. 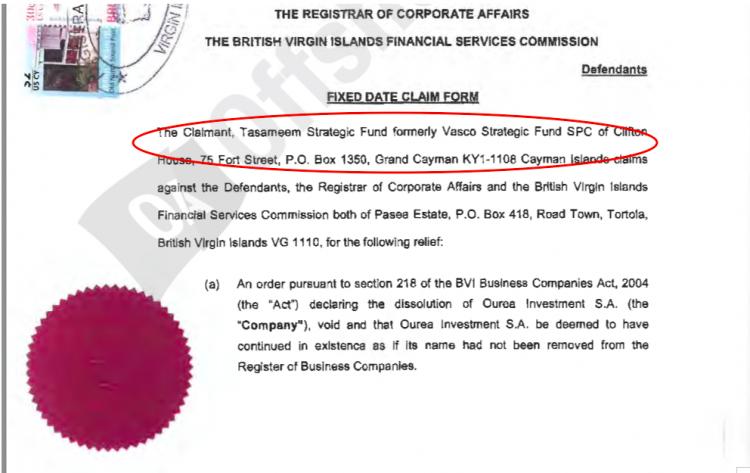 Records show the case was filed by Marc Ambroisien in November 2015, when he described himself as a Director of Vasco/Tasameem Strategic Fund 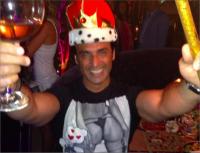 We revealed ‘KAQ’s’ other life and his love of clubbing

It was Sarawak Report which originally revealed in March last year that over $500 million had been transferred into Khadem Al Qubaisi’s private account, under the name of Vasco Trust, at the Edmond de Rothschild Banque Privee Europe (BPERE) in Luxembourg.

Some of that money was then transferred to the US to buy Al Qubaisi’s Walker Tower penthouse in New York and a Beverley Hills mansion, for which the DOJ have issued a seizure notices. 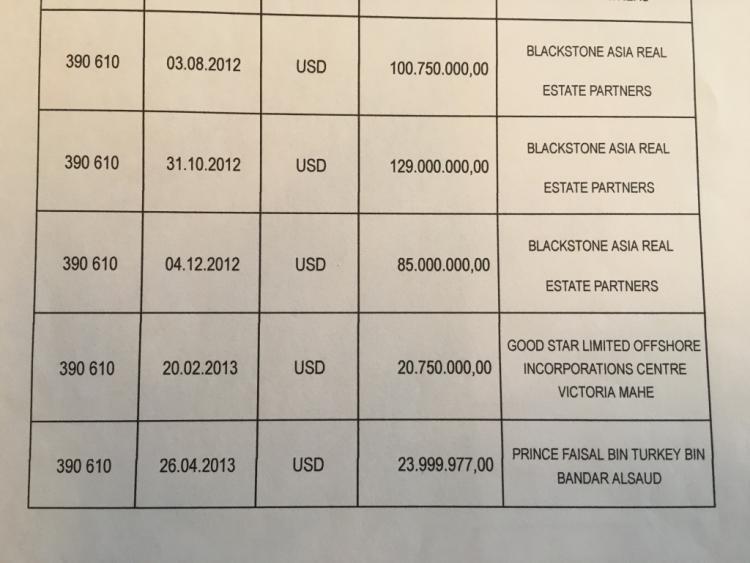 The original payments into the Vasco Trust account, which were all transferred from 1MDB via Aabar’s Falcon Bank and Jho Low companies like Blackstone Asia Real Estate Partners 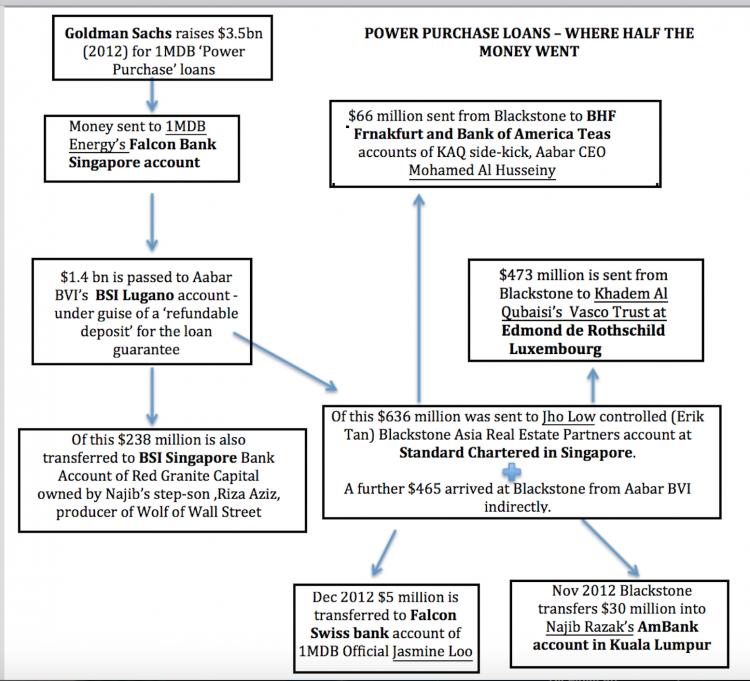 The DOJ have explained in detail how $1.367 was misappropriated from the two power purchase loans raised in May and October of 21012 totalling $3.5 billion, during the so-called ‘Aabar-BVI Phase’ of the billion dollar 1MDB scam. 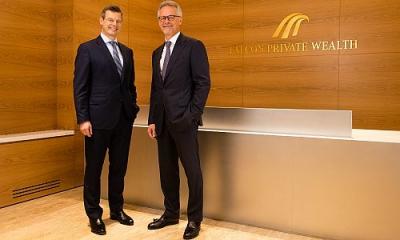 Falcon Bank was this week barred by Singapore from conducting future business, owing to its role over 1MDB

As shown in the diagram, Goldman Sachs, which had raised the money, first sent the lion’s share of the cash directly to 1MDB accounts held at Falcon Bank in Singapore, which was itself a subsidiary of the Aabar sovereign wealth fund of which Khadem Al Qubaisi (KAQ) was Chairman.

KAQ’s deputy Mohammed Al Husseiny was at the time Chairman of Falcon Bank.

Of this money a total of $1.4 billion was transferred on to the now notorious bogus ‘Aabar BVI’ account, which was held at BSI Bank in Lugano. BSI has already also been shut by Singapore.

Meanwhile, the Abu Dhabi IPIC sovereign wealth fund, of which the genuine Aabar is a subsidiary, has confirmed it had no knowledge of the diversion of this cash, which had been paid under the guise of it being a ‘refundable deposit’ for the ‘guarantee’ arranged by Aabar for the loans. 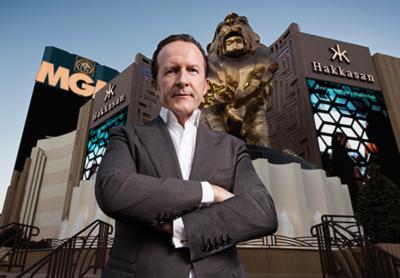 Neil Moffitt, CEO of Hakkasan, has claimed there is no 1MDB money in the group

From this moment on the money was effectively stolen and the theft could not have taken place without the connivance of KAQ and Husseiney, who were in charge of the genuine Aabar as well as being the shareholders and signatories for the bogus Aabar BVI.

The money was then passed mainly to another bogus company, Blackstone Asia Real Estate Partners, this time controlled by Jho Low.

From Blackstone, it has been established that around one third of the stolen cash was transferred to Al Qubaisi’s Vasco Trust by early 2013.

The Edmond de Rothschild head banker who oversaw the deal The man who smoothed the path for this enormous sum of money was the Edmond de Rothschild CEO, Marc Ambroisien, who told KAQ in a recorded phone call that any other bank “like HSBC” would have frozen and reported such a suspicious series of transfers.

However, he was prepared to fix it and could do so, given his position at the private De Rothschild bank.

One week after Sarawak Report reported the existence of the Vasco Trust account in March 2015, Ambriosien, a former French tax inspector, left his position at the Bank Privee Edmond de Rothschild.

However, for over a year he remained managing ‘KAQ’s’ private ventures.

Ambroisien was fired from Edmond de Rothschild, but stayed on managing KAQ’s companies

Until just days ago Ambroisien was a Director in charge of a web of Vasco related companies, according to company information in France and elsewhere. Various arms of the Trust have controlled different interests for Khadem Al Qubaisi.

Of particular relevance to the Hakkasan empire was a so-called umbrella investment arm called Vasco Strategic Fund SPC, originally incorporated in the Cayman Islands in 2011. 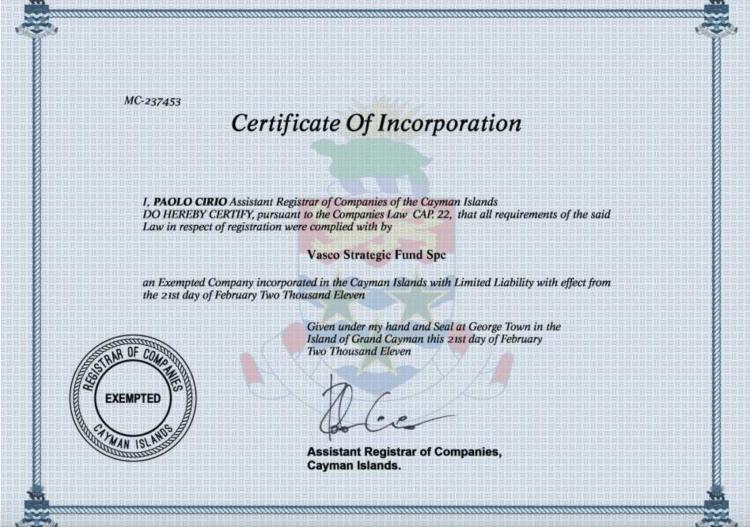 Vasco Strategic Fund was incorporated in 2011

Sarawak Report has obtained back statements relating to KAQ’s Vasco Trust, which include transactions by Vasco Strategic Fund, dating back to its ‘setting up fees’ in February 2011. 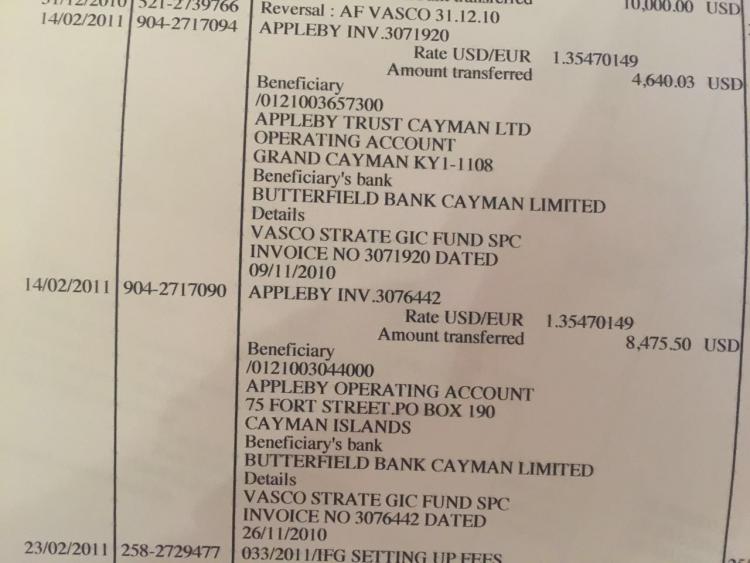 Court documents available from the BVI show that late last year the former Edmond de Rothschild CEO Marc Ambroisien made an application on behalf of a separate company (Ourea S.A.) in his capacity as a Director of Tasameem Strategic Fund. 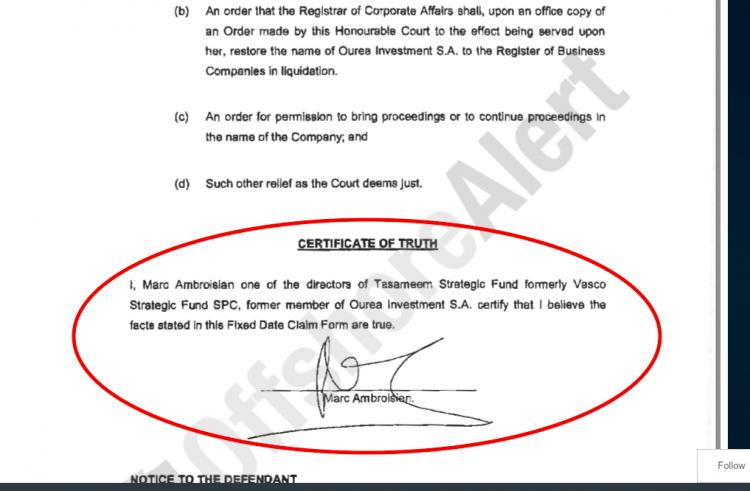 In November 2015 Marc Ambroisien remained a Director of Tasameem Strategic Fund, linked directly to the trust which received hundreds of millions from 1MDB

While Ambroisien was no longer acting for KAQ’s de Rothschild bank accounts by this date in November 2015, he was still managing many of KAQ’s private interests. He appears to have started resigning from those positions in favour of his boss only in the last few days (see below). Khadem Al Qubaisi, meanwhile remained the Chairman of Hakkasan right up until April of this year.

Ambroisien only resigned from KAQ’s private companies, such as this French property company, a few days ago

Plainly, therefore, Vasco and Tasameem have been linked to the same sources of income and the same management.

Tasameem still owns Hakkasan, according to its public accounts filed in the UK in May this year (which were signed off by the new Board members appointed after Khadem Al Qubaisi resigned April 19th).

Sarawak Report therefore questions claims by Hakkasan that its investments are ‘ring-fenced’ from money stolen from 1MDB and that there is no connection between the entertainment group and its owner (KAQ’s) other financial interests.

Hakkasan’s accounts, which are filed at Companies House in London, state specifically that the owner of the company is Tasameem Real Estate Company, which along with other affiliated companies of the same name belong to Al Qubaisi. 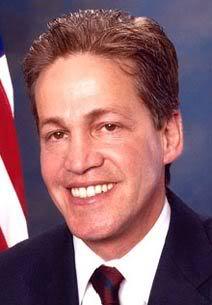 New board member, Senator Norm Coleman –   can he vouch there is no 1MDB cash?

The accounts also specify that much of the investment into the group has come from a $566 million ‘shareholder loan’ provided by Tasameem.

In fact, the expenditures into the Hakkasan group are estimated to have been well over a billion dollars since it began its massive and rapid expansion, beginning with the opening of the Omnia nightclub in Vegas in April 2013.

Since it is now established that a subsidiary of Vasco Trust subsequently became an affiliate of Tasameem, both managed by the former bank manager who managed Khadem Al Qubaisi’s affairs (until he finally resigned a few days ago), it is plain that there are indeed direct links between Hakkasan and Khadem’s 1MDB funded operations, meaning money could have flowed between them.

The concerns about Hakkasan’s more than abundant sources of cash are heightened by some troubling timelines.  The Hakkasan brand was bought up by KAQ as a relatively small restaurant concern in London in 2007 for £69 million.

In early 2013 the major expansion into the Vegas nightclub scene began – just a few months after the millions started arriving into the Vasco Trust from 1MDB.

As late as last month the group was still promoting its on-going expansion and also the fact that it is still owned by Tasameem:

Given that Sarawak Report has already established that Khadem Al Qubaisi, together with his brother owns Tasameem Real Estate Company and that he is the sole shareholder of its affiliate Tasameem Investment S.A. BVI, there remains the question as to how a salaried fund manager obtained $566 million to invest as a shareholder loan in this nightclub company? 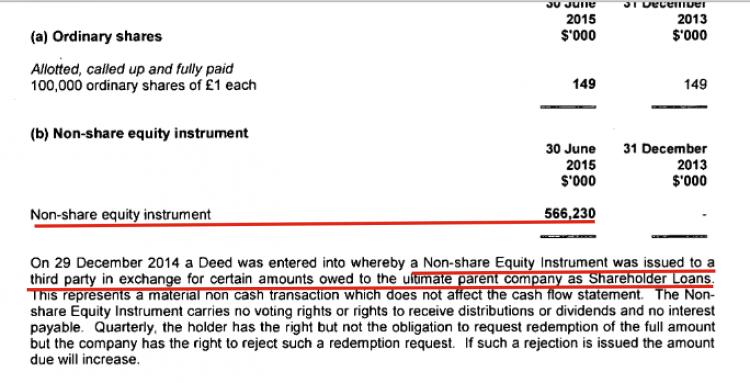 Sarawak Report believes, therefore, that the global investigators who are examining Mr Quabaisi’s financial affairs ought soon to be turning their interest to Hakkasan’s billion dollar business. 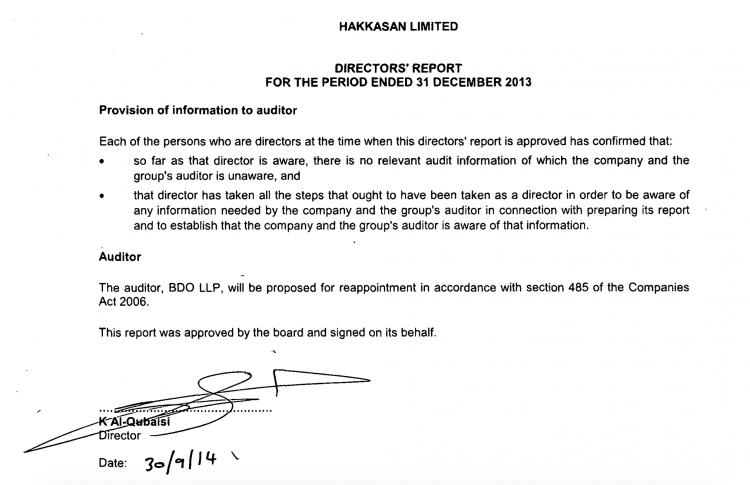