Sarawak Report has long argued that the narrative that banks, together with Najib and all his cohorts, were somehow ‘fooled’ by Jho Low would not wash. Despite years of seemingly proving they could, Goldman Sachs and others cannot in this case expect to have their cake and eat it.

Everyone can see it, which is why since the high point just before the May election shares in this bank have fallen from USD 273 to USD 160 this weekend – a staggering 41%!

Goldman Sachs ended the pre-holiday week not just facing an escalated demand from Malaysia’s Attorney General for a repayment of $7.5 billion in damages over those 1MDB bonds plus the escalation of criminal probes, this time emanating from Singapore, it was also facing a newly minted class action from shareholders furious that failures of basic due dilligence (or honest practice, take your pick) had almost halved the value of their investment, owing to that plunging share price.

Goldmans response was to continue to claim that the bank itself is innocent and that it was fooled by a rogue banker or two, who lied to compliance. This was the in-coming CEO David Solomon’s end of year statement to workers at the bank:

“I cannot stress enough how integrity is a cornerstone of our culture.

“While we understand the anger and skepticism, we do not believe that the criticism directed at us accurately reflects who we were then or who we are now,”

“We believe our culture and our processes around our due diligence and compliance was strong at the time, and is even stronger today.” [Channel News Asia]

Double down, push back, use your muscle, throw money at lawyers, divert attention have proved the textbook tactics for major players used to getting out of trouble over their own actions, however the trick is to recognise the day when none of these are going to work.

None are going to work for Goldman Sachs for the simple reason that on May 9th the overwhelming majority of the 30 million people of Malaysia voted BN out and demanded retribution over 1MDB.

What’s more, the new government of Malaysia is working with the US Department Of  Justice and the FBI plus numerous other international law enforcement agencies to get to the truth about the world’s largest theft, which Goldman Sachs enabled and profited greatly from.

There are now two indictments in the US court system citing Goldman Sach’s role in the matter of 1MDB, including a guilty plea by the bank’s former Souteast Asia boss, Tim Leissner, in which he admits that several senior colleagues at the bank aided and abetted him in creating a massively disadvantageous bond for 1MDB, in order to steal half the money raised and bribe officials (like Najib, Rosmah and IPIC’s Khadem al-Qubaisi)…. and to pay vast bonuses to Goldman partners and US$100 million in kickbacks to Leissner himself.

If David Solomon wants to say that the bank seriously didn’t know something wrong was going on in all this, then the answer is none of them are fit to run a bank. Sarawak Report was the first to openly challenge the 1MDB bond deals and that was back in 2013. There was enough information in that article alone, which was based on obtaining a copy of the secretive bond offer, to alert Goldman Sachs that they needed to heavily scrutinise the deal that had made them all so much money.

Instead, the bank did precisely nothing. Neither did it react to the eruption of the 1MDB scandal in 2015, together with the imprisonment of their former partners in the bond issue Khadem al-Qubaisi and Mohamed al-Husseini. Clearly they must have realised something had gone amiss by that point?

Yet, even after the Department of Justice announced its civil seizures of billions of dollars in assets in 2016 and Jho Low rushed into hiding, no moves were made.  As piece by piece the crooked nature of these bond deals came out and it became clear that claims in the Goldman offering document were entirely false, the bank did nothing to address the fact that it had plainly misrepresented these bonds to trusting customers.

Leissner was eventually let go, but nothing was done to address the situation over the plummeting value of 1MDB’s mis-sold bonds. After all, the bank’s own share prices held steady, right up until Malaysia threw out Najib Razak.

There are a number of other banks with their heads in the sand over the same scandal, notably ANZ. Many others have ‘fessed up and faced fines. However, Goldman Sachs plainly thinks it can still limit the impact, ring fence the problem and claim that the wider bank was in no way to blame for the scandal it benefitted from so greatly.

As Goldman insists on firefighting on all fronts on this matter, rather than lancing the boil and starting over, it is worth evaluating just what the bank is going to have to claim it did not spot while in plain sight.

In just one of the cases now being fought, for example, the newly revamped IPIC (which Abu Dhabi immediately took in hand after the arrest of Khadem al-Qubaisi in 2015) has blamed the entire bank for what it describes as “massive global conspiracy” to defraud 1MDB and its own fund.

After all, huge sums of cash were siphoned out of the bond issues in the name of paying off IPIC for a guarantee, when in fact the money did not go to IPIC it went into a bogus off-shore account with a similar name to the Aabar subsidiary involved in the deal. If Goldman had checked at any point, they could have found this to have been the case.

Even more damning are the cold facts laid out in the criminal case that Malaysia has now laid not just against individuals, as in the United States, but against three subsidiaries of the bank, including Goldman Sachs International based in London.

In these indictments the Malaysian Attorney General spells out exactly why the bond offerings were fraudulent, pointing to related facts and agreements that were made as part of the deal with IPIC, which were not passed on as relevant information to the buyers of the bonds. Any investigation by Goldman Sachs’ own hierarchy into the matter would have thrown up these failings immediately, meaning either there was gross malfeasance or gross incompetence, because the bank has had three years to look into the matter during the period after 1MDB became an international scandal alone.

Key pieces of information, which AG Thommy Thomas points out were not passed on to bond buyers or made clear in any audit, include the role of the red flag customer Jho Low as the prime intermediary in the issuing of the bonds and also the fact that agreements had been made at the time of the bond issues pledging to pay around half all the money raised back to the IPIC subsidiary Aabar in return for getting the parent fund to guarantee the bond. That would have made it impossible for these bonds to yeild sufficient returns.

IPIC didn’t know about these agreements either of course, and the money was sent to the bogus BVI company called Aabar PJS Investments Limited instead.

Another agreement hidden from purchasers of the bonds was the option provided again to Aabar to allow it to buy 49% of the power companies subsequently purchased using the remainder of the money. This provided another excuse to siphon out more money from 1MDB on the pretext of ‘buying out the option’. 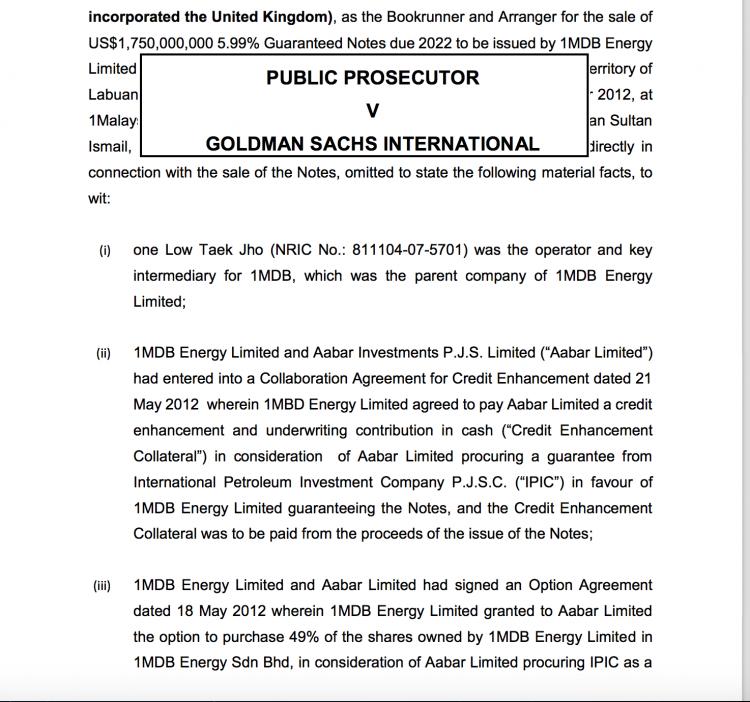 The bond offer fraudulently omitted to warn buyers that more than half the money to be raised was earmarked to go in cash ‘payments’ to an off-shore company, a bogus subsidiary of IPIC

What’s more, the AG goes on to point out that those guarantees were themselves meaningless and unenforceable, because a separate secret agreement assured that the Malaysian Ministry of Finance would bail out the Abu Dhabi fund for the entire amount.

The AG could also have added that the bond offering documents made other claims, long since disproved, namely that the 1MDB fund was ‘robustly’ and ‘independently’ managed through a ‘three tier’ system including an independent board, management and advisory board. What has since emerged was that the fund was entirely in the hands of a sole signatory and shareholder, namely the Finance Minister Najib Razak, who had secretly amended the articles to ensure only he could authorise decisions. The Advisory Board had never met.

The scam was so thinly disguised and so appallingly expensive to 1MDB that any investigation by Goldman Sachs would have flushed it out. However, until May 2018 the bank clearly reckoned that it could brazen the matter out, protected by Malaysia’s own failure to go after its stolen money, despite the fact that wrongdoing had so clearly been pointed out by the authorities in the bank’s own home in the United States.

Goldman Sachs and others had walked away from their part in causing the financial disaster of 2008 and seemed to have taken the lesson that they had proved them ‘untouchable’ and ‘Masters of the Universe’.  Cynically, the bank went on to strip what the political boss of its President and COO at the time of all those thefts (Gary Cohn) categorised as a ‘shithole country’ of its assets, seemingly in the belief that BN’s corrupted leadership could stay in power for ever and cover the tracks.

However, Malaysia is not a ‘shithole country’ and the people fought back. Goldman Sachs now have one option only, therefore, which is to pay out, accept their punishment and hope to then start to repair the damage…. if they keep their licence.